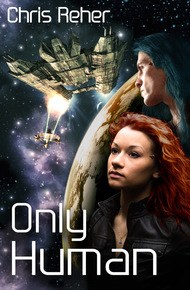 Captain Nova Whiteside is assigned to the elite Vanguard task force assembled to combat an increasingly dangerous rebel force. Her no-nonsense new commander is of an enigmatic and reclusive species that soon figures most decisively in the balance of power.

Their pursuit of a ruthless rebel leader takes them through the worlds and dangers of the Commonwealth-dominated Targon sector where the line between their personal lives and their mission quickly begins to blur.

On their quest to recover a dangerous, living weapon in rebel hands it seems that the greatest opposition comes from among their own people and Nova must choose between duty to her command and loyalty to her friends.

A book in the middle of a series can often be problematic. New readers might be lost, uncertain of this character or that plot thread. Not so with the books of the Targon Tales. Though they are undeniably part of the same universe, and each expands the scope of the adventure, this book is just as satisfying as a standalone. Brilliantly done. – Joseph R. Lallo

"I would have appreciated a meeting in little more… wholesome surroundings," Velani sniffed disapprovingly. He looked up at the Human who had brought him here, then at the Caspian sitting across the table.

Pe Khoja studied the Delphian through half-closed lids. Pinched, aristocratic face with a beak of a nose. A voice that grated. Not so young anymore; Pe Khoja judged him to be third, maybe even fourth quarter. Skin of the left forefinger worn-looking as if from the chafe of a heavy ring worn for years. Maybe the sapphire ring worn by Shantirs. Just as interesting, the Delphian was barely able to maintain the arrogant indifference so carefully practiced by his people.

He slumped deep into his seat and drew a knee up against the edge of the table. His eyes searched through the noisy, surging crowd around them, seeing no one loiter, no one watching. If there were Union agents here, they were well concealed. The nervous Delphian before him sat erect in a crowd of slouchers, eyeing a brawlsome group of travelers at a nearby table as if he expected an imminent assault. He looked out of place here in Feron's only public airport and interstellar launch.

It took hard-earned experience to distinguish ticket-holding commuters from the riffraff of thieves, panhandlers and whores. Moneyed people used Feron's Union-owned airdrome on the other side of the glaring, blaring city. No one ever came here to stay. It was a stopover at best. A fortunate few used the launch to leave this place forever. For Pe Khoja, the mining planet was a place to meet pirates and renegades, his most valuable contacts. When possible, he avoided it altogether.

He glanced up at the pilot that had delivered Velani. "Get lost."

Fynn Bridger looked from him to the Delphian and then moved away, his eyes on the surging crowd around them.

"This will do for our first date," Pe Khoja said to Velani. "Now tell me why a Delphian is looking for the likes of me."