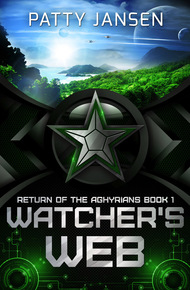 Watcher’s Web (Return of the Aghyrians: Book 1) by Patty Jansen

She is lost on an alien planet. He said he'd help her get home. He lied.

A group she thinks is a search party shows up, but it consists of large-eyed not-quite people who kill all survivors except Jessica and a long-haired hippie named Brian.

No one is going to come to rescue her. In fact, they're not even on Earth.While the pair wrestle their way through the forest in search for help, Jessica becomes ever more suspicious of Brian. Why does he know so much about the world where they have ended up? Why is he so insistent on helping her?

Jessica has always been able to use her mind to tell animals what to do and now she's hearing voices in her head. Another man is pleading her not to listen to Brian. Except this man can kill someone with a single look, and he uses his mental powers to order people around.In this utterly strange and dangerous world where people seem to want something from her, who can she trust?

A gritty survival story in the vein of The Hunger Games, set in a Star Wars locality.

I have had the good fortune of having worked with Patty Jansen in the past, so even sight unseen, I would have included Watcher's Web. Once I took a look inside, however, I discovered a story that I simply couldn't resist. A mixture of the familiar and the foreign, Watcher's Web brings the adventure and mystery of space much closer to home than many of the other stories in the bundle. It's as story of trust and betrayal, of fearsome powers and desperate survival. Good stuff. – Joseph R. Lallo

Wherever Jessica went, people watched her. Like those two teenage boys leaning on the fence, Akubra hats pulled down to shade their eyes. One of them dangled a cigarette in careless fingers; the other swigged beer from a stubby. Neither was watching her now, but she hadn't missed their gawking, nor their voices barely elevated over the noise of bellowing cattle, shouts and truck engines.

Wow! See that really tall one?

How'd you reckon she kisses a guy? On her knees?

They laughed and, when she came closer, faced the yard to watch the cattle as if they had said nothing.

Jessica walked past them to the gate, glaring at their straw-covered backs. Well, I bloody heard you. She was used to it, anyway.

It hadn't been the worst thing people said about her. They hadn't said the words ugly, or creepy, or freak, but she was used to hearing those words, too.

They went into a little hard spot inside her where she scrunched up the hurt and forgot it. She might look like a freak, but when she helped John Braithwaite and his mates from the Rivervale Stud Farm at a cattle show and Angus went into one of his fits, they still needed her to get him into the truck without spooking him. No one else could do that. No one knew how she did it, and no one should ever know. Because no one was crazy enough to get into a pen with a stroppy bull, right?

Well, we'll see about that.

She grasped the top of the gate with both hands, stepped onto the middle bar and swung her foot over. Jumped. Landed in sun-baked mud churned with cloven hoof prints and cow pats.

At least when Angus looked at her he didn't hide his dislike. He rolled a beady eye and blew a gust of hay-scented air from his nostrils. He stiffened, all fifteen-hundred-odd kilograms of Brahman bull-flesh of him. Then lowered his head, horns poised.

Someone yelled, "Watch it!"

No, he wasn't going to charge. He'd charge at the boys, he'd even charge at his well-heeled owner, but never at her. Call her arrogant, but she knew that; and how she knew it would remain a secret, too, thank you very much.

She stopped a few paces inside the pen and crossed her arms over her chest. Well, bugger that. She had a bloody audience. About twenty people, mostly men, sitting on the fence, with cynical hey-look-at-this-mate expressions plastered on their faces.

Beef cattle farmers, their lackeys and other hangers-on, those clowns who had partied in the pavilion last night, those who owned the bulls that had occupied the pens next to Angus'. All their animals were already in the trucks, ready to be taken home from the Pymberton show. None of them with a "best of show" ribbon, like Angus, and none with a diva mentality.

It looked like the boys had been trying to get Angus to move for a while. The gate on the opposite side of the pen was open, the ramp in place. Brendan held the door to the truck, ready to slam it. Everything about his expression said, rather you than me. The coward.

Men sniggered, including the two teenage boys. The one with the cigarette flicked ash into the pen and said something about a whip.

Now who was more stupid? Them or the bull? You did not frighten such a prize animal if you could help it. He might bolt and injure himself. An unsightly gash would take him off the show circuit for months. Sheesh!

Jessica reached through the fence into the bucket she had dumped there. Her hand came away black and sticky with molasses. Angus loved it.

She inched closer, holding out her hand Come on, look me in the eye, if you dare.

Angus blew out another snort, as if he knew what was coming. Backed into the fence. Met her eyes.

Jessica exhaled. Her breath seeped from her in tendrils of sparkle-filled mist, which sought out Angus' fur and crept over his grey-mottled back, a bit like glitter-glue, but alive.

Jessica lunged for the rope that dangled from Angus' collar. She couldn't quite reach it, and while Angus backed further away from her, scraping along the fence, he planted his hoof on the end of the rope, squashing it neatly in a fresh pile of dung. Just her luck.

She pulled the mist tighter around him, so his coat sparkled and glittered with lights. His outline became fuzzy. She didn't know what to call it, and had learned not to talk about it to anyone. It wasn't that she could communicate with him, but she could tell him what to do. Sort of. In a weird way she couldn't explain in words. The mist soaked up emotions, as far as bulls have emotions, and dampened them, and she could override them with her own. If it worked.

Her audience had stopped talking. Anyone who watched always did that, even though they couldn't see the mist and didn't realise it influenced them, although not as much as it affected the animal. That was just as well, because she was making an idiot of herself. Angus was being bloody stubborn, his head still lowered, trampling the rope further into the shit. Something must have spooked him badly. Maybe it was the yapping from the dog pavilion. Well, she and Angus seemed to have something in common—she didn't like lap dogs either.

But he was going to get into that bloody truck, preferably before she missed her flight back to Sydney. All kinds of hell would break loose if she wasn't at the school basketball team meeting that night.

The threads solidified and the mist spun into tightly-coiled cords, which wove into a formation like a spider's web.

She froze, staring at the writhing construction. It looked like someone had cast a living net over the bull, one made of sparkling mist that yanked and stretched of its own volition, or . . . as if something pulled at the other end. There were shadows in a nebulous space over Angus' back, and a male voice, just outside the edge of hearing, calling out to someone. The web vibrated and strained.

A tug of war between herself and . . . Who was pulling the other end?

In her panic, she broke loose from the construction. The shadows at the other end of the web faded. The strands dissolved into mist once more.

A wet nose touched her palm and Angus' rasping tongue curled around her wrist. The molasses was clean licked-off, but he probably liked the salt of her sweat, because her arms glistened with it. She hoped no one noticed.

Her legs still trembling, Jessica pulled the rope and inched towards the gate. Angus followed her meekly, up the ramp, into the truck, where one of the boys was ready to tie him up.

Jessica leaned against the truck, forcing herself to grin at her audience.

"Can anyone give me a lift to the airport?"