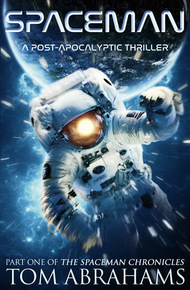 Tom is a member of the International Thriller Writer's Association.

He is a hybrid author (traditionally and self-published) who writes post-apocalyptic thrillers, action adventure, and political conspiracies.

Tom is also the author of the critically acclaimed trilogy THE SPACEMAN CHRONICLES and political conspiracy novels SEDITION and INTENTION.

His novellas CROSSING, REFUGE, ADVENT, and RED LINE are available as e-books through an arrangement with Amazon's Kindle Worlds.

Clayton Shepard is 249 miles above Earth when the lights go out.

He has no communication, limited power, and an unbreakable will to survive.

His one goal: find his way BACK to his family.

Shepard is an astronaut on his first mission to the International Space Station.

When a violent blast of solar magnetic radiation leaves him stranded in orbit, he's forced to use his wit and guile to find a way home.

He has no idea what he'll find when he gets there.

The cover of this book shows an astronaut, of the sort we have in the modern era, and includes the words Post-Apocalyptic Thriller. Maybe it's because I've been an author for a while, but the idea of combining our own limited capacity to travel through space with a post-apocalyptic setting/event sounds extraordinary. Let's face it, we are NOT good at space yet. Tom Abrahams didn't disappoint. There is an air of realism to some of the hazards that makes them infinitely more realistic. – Joseph R. Lallo

It was shrill, echoing through the station until Clayton Shepard typed a series of commands into the computer to disarm it.

He ran his finger across the screen, not believing what he was reading, what the alarm was warning. It was outside the bounds of what was reasonable or even possible. It appeared out of nowhere, and yet, it didn't. They should have seen it coming. They did see it coming. They chose to ignore it.

He pressed a button that keyed the microphone nearest his mouth. "Houston," he said, "station on space-to-ground one. Are you seeing the alarm?"

"Station, this is Houston on space-to-ground one. We see it. We have a team looking at data. Stand by."

Clayton rolled his eyes. "Are you kidding me?" He keyed the mic. "Houston, this is station on space-to-ground one. I don't think we have time for that. I'm asking we abort the spacewalk now."

He looked through the window to his left. Astronaut Ben Greenwood stopped his work, turned around to face Clayton through the mask on his helmet, and joined the conversation.

"Clayton," said Ben, "what alarm?" Greenwood's helmet reflected a fish-eye view of the Cupola, in which Shepard was monitoring the first emergency spacewalk of their expedition, what NASA called extravehicular activity or EVA.

Clayton read the alert again. A severe magnetic storm was coming. The earlier anomalies were indicators they should have paid closer attention to. He swallowed and cleared his throat before keying the mic again. "The onboard coronagraph is giving indications of large, transient disturbances on the Earth-facing side of the Sun."

"You mean solar flares?" Ben asked. "I knew it. I knew we shouldn't be out here."

"We've checked with Boulder," the radio call from mission control interrupted. "They confirm the alarm, as does Huntsville. Loops are growing in intensity. There is a coronal mass ejection within striking distance. Our original assessment about the CME may have been incorrect."

"Incorrect? That's an understatement," muttered Clayton, cursing the antiseptic language ground controllers were apt to use.

The third member of the expedition, Cosmonaut Boris Voin, was ten yards from Greenwood, tethered to the exterior of the station. "Clayton," he said through his mic, his English barbed with his native Russian accent, "are we killing spacewalk?"

Shepard took a deep breath before answering. Days earlier, they'd seen evidence of a coronal mass ejection, what they'd believed was a part of the corona tearing away from the Sun.

First there was a ridiculous X-ray burst registered by the Geostationary Operational Environmental Satellite.

"It's nothing critical," was the original assessment, even after that initial blast was soon followed by a strong detection of solar energetic particles in the Earth's atmosphere. That kind of detection was rare. However, the South Pole station, which was responsible for measuring the intensity of solar eruptions, had been malfunctioning for months. Instruments were in the midst of recalibration.

That was one excuse for ignoring the signs. The urgency of the spacewalk was the other.

The ISS relied on its large photovoltaic solar panels to track the sun and provide power. That rotation was enabled by large bearings called solar array alpha joints. Sixty days into the mission, the joints were hard to turn, and the crew had to shut them down. If they weren't fixed quickly, the solar panels' ability to track the sun and provide power was diminished. The ISS would lose much of its power. The crew's life would be in danger.

After looking at the data and considering the needed repairs, mission control determined the reading was an anomaly. Coronal mass injections, or CMEs, as they were called, happened nearly every day. This one, they concluded, was no real threat.

"We'll need an EVA," ground controllers had told the crew. "Greenwood and Voin will attack the problem."

"What about the CME?" Greenwood had asked. "If we're out there when it hits, that's a bad thing. We're also at half crew. The previous expedition is back on Earth and the replacement team is delayed from launch for another four days. Wouldn't it be better to wait for our full complement of six?"

"Have to admit," Greenwood ha said, "I'm not thrilled."

"We're confident our assessment is correct," ground had insisted. "The risk is minimal; the reward is great. At worst, the storm would temporarily interrupt our communication. Nothing more."

Now they knew they'd been wrong.

Clayton keyed the mic. "Houston," he said, aware the spacewalking astronauts could hear him, "it's my recommendation that we immediately kill the EVA."

Mission Control replied immediately. "We agree that out of an abundance of caution the best course of action is terminating the EVA. Move immediately to the Soy—"

Clayton pressed the mic. "Houston," he said, a hint of panic in his voice, "do you copy?"

No answer. He looked out the window.

Clayton tried Boris, then Ben again. No response. He wasn't even sure his radio was working. Shepard switched channels.

The station talked to the ground through one of two methods. One was the Tracking and Data Relay Satellite System, TDRS, and it had multiple options. The ISS could use antennas that pointed away from Earth and toward satellites in geostationary orbit. They were government owned and operated. If one satellite didn't work, perhaps the next would.

"Houston," he said, "station on space-to-ground two for comm check."

He repeated it three more times and then switched to channels three and four. Neither produced more than a hiss and a crackle.

His other option was trying to communicate with the Russians from their side of the station. Their antennas aimed directly at Earth, but were only operational when the station was flying over that part of the world. Not an option at the moment.

"This cannot be happening."

Astronaut Clayton Shepard was ten weeks into his first mission in low Earth orbit when the impossible happened. The coronal mass ejection experts thought couldn't exist carried with it sixteen billion tons of hot plasma and charged particles. It outraced the solar wind at an astonishing two million kilometers an hour, creating a blast wave ahead of its impact with Earth and its orbiting satellites. The cloud, larger than any ever recorded, collided with Earth's magnetic field and created an enormous surge.

High-energy protons peaked at over two hundred and fifty times the norm and slammed into Earth, where the effect was instantaneous. Electrical currents in the atmosphere and on the ground surged repeatedly at varying degrees.

Within ninety seconds of impact, chain reactions began to shut down power grids and damage oil and gas pipelines across the entirety of the planet. Satellites orbiting the Earth absorbed the electrical surge, and those that had not shut down the high voltage on their transceivers were either destroyed or significantly damaged.

Unlike solar flares, the CME had left the Sun gradually, gathering speed as it accelerated outward and away from the star's surface. It traveled nearly twice the speed of any previously recorded CME and carried with it sixty percent more material than the typical value of a CME cloud.

By the time it hit the ISS, the station was in the worst spot possible, racing above the Atlantic Ocean in a highly magnetic region of the planet called the South Atlantic Anomaly. It only worsened the impact on the station, which was radiation hardened to withstand minor event upsets. It couldn't handle anything like the invisible tsunami that had just surged and crashed over it.

Without knowing exactly what had happened, Shepard knew what had happened. He steadied himself in the darkness of the Cupola, a dome-shaped module with seven panoramic windows, and pressed his hands against the glass. It was almost five feet tall and a little more than nine feet across, but it felt like a coffin.

He looked to his right, out window three, and saw the Canadarm2, the station's large robotic arm used to build parts of the station and to grab incoming cargo vehicles. Beyond the arm was his home planet.

From the underside of the station, the Cupola was the perfect spot from which to watch Earth as the ISS moved at five miles per second around the globe. He was speeding past North America.

It was dark. The familiar spider webs of lights that marked large metropolitan areas across the continent were missing. Like the ISS, the planet was virtually powerless.

"Jackie," he breathed, looking toward the area he thought was Texas. A thick knot grew in his throat as he suppressed his emotion. "The kids." His lips quivered, his eyes welled, but Clayton Shepard, the mechanical engineer and astronaut, steadied himself. He'd have to worry about them later. Right now, his own survival and that of his crew was paramount.

Shepard gripped the sides of the laptop display directly in front of him. The screen was black. He thumped the spacebar with his thumb. He hit the power button as if he were trying to score points on a video game.

To his right, facing the Canadarm2 underneath window three, was a joystick. It controlled the arm. He jockeyed it back and forth and then slapped at it with his hand. Nothing happened, not that he expected it.

Shepard spun one hundred and eighty degrees. Cosmonaut Boris Voin was still there. He was tangled in the tether that connected him to the ISS. Feet away was veteran Astronaut Ben Greenwood. Ben had his hands up in surrender. Shepard didn't know if they were dead or barely clinging to life.

He took a deep breath and closed his eyes. "Tell me this is a dream," he said to the empty room. "This has got to be a dream."

He opened his eyes and reaffirmed what he already knew to be true. If he couldn't restore power, they were screwed.