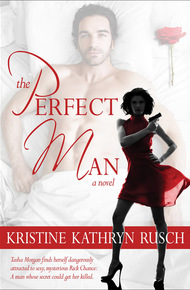 Tasha Morgan finds herself dangerously attracted to sexy, mysterious Rick Chance: A man whose secret could get her killed.

Tasha Morgan's family warned her about Rick Chance. Impossibly handsome and alarmingly sexy, Rick takes Tasha's breath away. But Rick has a reputation—as a womanizer and worse. Still, Tasha finds him intriguing.

Rick Chance finds Tasha Morgan intriguing, too. Sexy and beautiful, he flirts with her despite her wealthy family's dislike. But Rick fears getting too close to Tasha and dragging her into his secrets—secrets he works very hard to keep hidden from everyone.

When Tasha's job as a detective intersects with Rick's secrets, she wonders if she should have listened to her family's warning. But Rick makes a convincing case—one Tasha must solve quickly. Lives hang in the balance. Rick's life. Tasha's life. Even their life together.

New York Times bestseller Kristine Kathryn Rusch writes in every genre. She has won awards in most of them and uses pen names for a few of them. The Perfect Man came from her cross-genre career, when she was writing a romance for an anthology, and realized that if you switched the genders and dealt with secret identities, you had a twisted mystery with some surprising female characters. Written years before the #MeToo movement, the book nonetheless deals with issues the movement has brought to the surface. If you want to find out more about Kris's work in all the genres, go to her website kriswrites.com. – O'Neil De Noux

RICK CHANCE SAT on the front steps of his new house, and watched as the neighborhood came alive. He had moved to an upscale development in Portland's West Hills. The homes were large and only ten years old, and they all looked the same.

Most of the people on this block worked nine to five. As the chill of evening approached, cars showed up, people returned, and leisure time began.

A cup of coffee cooled in his left hand. He felt comfortable for the first time in years.

He liked the rhythm of this place. It calmed him and almost made him believe he could belong.

The alarm on his watch beeped, and he sighed. He set his coffee down, then turned his wrist, shutting off the alarm.

The only bad thing about his move to Oregon was that he now lived near his family. And tonight would be the first big family gathering since his return. He wasn't ready for all the questions, the comments, the sideways looks.

He would have turned Gerald down if it weren't for Jane. Rick's big sister had been his only support and comfort during his years away. She had begged him to take part in family events, which he would do until it got too uncomfortable for her. And it would. He wasn't about to defend himself to these people. He wouldn't explain himself either.

Rick picked up the mug, downed the last of the coffee, and went inside the house. Time to find something to wear. Since he was the family's black sheep, he figured it was only right to dress the part.

Natasha Morgan stood knee-deep in garbage. Her khaki pants were ruined and so were her shoes. Good thing she didn't spend much money on her work clothes.

The stench—a mixture of rotting meat and sour milk—was incredible.

Tasha resisted the urge to wipe her nose. She'd done that once already and it had been a mistake.

The sun reflected off windows of parked police cars. Tasha had to be careful which way she faced so that the light wouldn't blind her. She glared at the precinct itself—a white brick building that had faded to gray—wishing some other detective would come out here and help, even though she knew she wouldn't dig through garbage to assist another team.

Her partner, Lou Rassouli, used his gloved hands to take another bag of garbage off the pickup truck. Lou was a barrel-shaped man with biceps the size of her thighs and strong hands, scarred from years on the street. His face was lined—compassion lines, she called them, because they could ease into the most sympathetic features she'd ever seen.

The bag was a self-tie white plastic, and he was having trouble opening it. Finally, he ripped out the bottom of the bag and dumped the contents onto the precinct parking lot.

"How much more do we have?" she asked.

"Half the truck." Lou sounded discouraged. They had found the garbage at Damon Pfeiffer's building, but had been unable to determine which bags were his. So they'd had to take the entire Dumpster load.

Even so, Tasha had a horrible feeling this would be a dead-end. It seemed that nothing they did could tie Pfeiffer to his brother's murder.

"What do you think we're going to find?" she asked.

"If we're lucky, a note Pfeiffer wrote to his brother, threatening to kill him. It would be really nice if he signed and dated it."

Lou grabbed another bag, then grinned at her. "That's the nice thing about garbage. You never know what you're going to get."

Tasha shook her head as Lou dumped the next bag. When she had gotten promoted to detective she somehow hadn't imagined herself sifting through someone's garbage. Some silly part of her had expected to solve crimes in less than sixty minutes with the help of her trusty partner and a sudden flash of insight.

Actually, the insight came often. She had a knack for this job. But the problem with insight was that it didn't stand up in court. She needed evidence too. And in this case, especially, evidence was particularly hard to find.

The sun went beneath a cloud, sending a chill across the lot. It was getting late. Tasha sighed as Lou threw more bags onto the pile. Not only would they have to search, but they'd have to clean up this mess as well. The lieutenant wouldn't appreciate losing a corner of the precinct parking lot to a mountain of garbage.

Lou tossed the last bag in the mix, then put his hands on his back and stretched. "Most of this stuff is going to be pretty easy to sort through. Food scrapes, coffee grounds, things like that. It's the other stuff we gotta keep an eye on."

She sifted through a stack of magazines, all of which were addressed to an apartment below Pfeiffer's. She picked them up by the corners and shook them. Little subscription cards fell out, but nothing else.

"People don't believe in recycling any more," she said.

He kicked aside some beer cans and started on the outer edge of the pile. Then he looked up at her. "Say, Tash, don't you have a thing?"

She had just tossed aside an unidentifiable ball of slimy material. "A thing?"

"Tonight. Don't you have a family thing?"

He had to push aside his glove to read his watch. "Almost five."

Tasha swore. "It's not just a family thing, Lou. It's Brooke's rehearsal dinner, and I'm covered in garbage. Oh. My. God."

Lou gave her a sympathetic look. He knew how much trouble Tasha had with her family. They had never understood her—particularly her desire to take such a challenging job. They would hate it if she canceled. She'd be in trouble if she were late, and they'd never let her forget it if she showed up covered with filth.

But she had no choice. She had to stay here.

She shook her head. "This mess—"

"Won't be that hard to go through, especially if you send one of those desk jockeys out here on your way out."

He grinned. There was a yellow dab of something stuck to his chin. "You'll owe me."

She knew it. She had even told him to push her if she balked. In a fit of weakness, she'd agreed to be Brooke's maid of honor. It had been a big mistake. She'd been forced to attend showers and girl parties. She'd even had to host one herself, which would have been a nightmare if it weren't for Lou's wife who volunteered to help her.

Tasha simply wasn't good at girl things. She had never placed a priority on them, and for the most part, she didn't enjoy them. She hadn't been kidding when she said she would rather be sorting through garbage than going to the dinner.

"It's all right," he said. "I'll think of suitable payback."

She had no doubt about that. She had a hunch she'd be paying for this one for a long, long time.

It had taken Herbert Beebe two days to find the house. The streets in Portland ran on a grid pattern, but the house was in a neighborhood filled with oddly named housing developments. The streets in those places shared names: Paradise Drive, Paradise Avenue, Paradise Court. The house numbers didn't run in order either.

The place was a deliveryman's nightmare.

Beebe finally located it on a quiet block. The house was large and beautiful. From the outside, no one would be able to see the horrors that happened inside.

He took a deep breath. His hands were shaking.

"I'm here, Jessamyn," he whispered, hoping she could feel his presence through the locked doors, the thick walls. "I'm here, and I'm finally able to help."