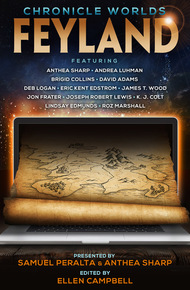 Samuel Peralta is the creator and series editor of the acclaimed Future Chronicles series of speculative fiction anthologies, with every title rising, in turn, to the top of the Amazon bestseller lists, including the bestselling Chronicle Worlds: Feyland.

Samuel's book projects have hit the Wall Street Journal and USA Today bestseller lists and have hit #1 in the speculative fiction charts on all major ebook platforms - Amazon Kindle, Barnes & Noble Nook, Apple iBooks, and Kobo. He was recognized as a Best American Science Fiction & Fantasy notable author for his work, Hereafter.   Samuel's passion in digital publishing parallels a drive in technological and business innovation. A Ph.D. in physics and a successful technology executive, he serves on several Boards of Directors, having co-founded or had leadership roles in several companies. A semiconductor firm he co-founded was named to the Toronto Stock Exchange's TSX Venture Top 50, and to Canadian Business Magazine's Top Tech 100.

Samuel has also supported and helped produce over a hundred independent films, including The Fencer, which earned a Golden Globe nomination for Best Foreign Language Film.

Samuel Peralta's Chronicle Worlds anthologies bring together a diverse and talented set of authors to create short stories set in the lead author's universe. I was delighted to be the first to share my world with eleven leading speculative fiction writers. The resulting stories in Chronicle Worlds: Feyland run the gamut from fantasy with gaming elements to a World of Tanks type tale – with plenty of virtual reality adventures and a bit of tricky faerie magic to lead the unwary gamer astray. – Anthea Sharp

I've always been about taking risks, starting with poetry, my first love affair with writing. Although I'd won awards and found online success, when I risked the next step of trying to place my work with a major literary publisher, my magnum opus spent a year languishing on an editor's desk, only to be rejected.

I decided to risk it all and start over again, in speculative fiction. The goal was to build on my literary craft, but in a more mainstream genre, a direction suggested by the works of Margaret Atwood and Kazuo Ishiguro. My first story, "Trauma Room", was a flash-fiction sample piece, to convince folks who'd never heard of me to take a chance. It worked.

Three other stories I'd written were quickly placed in three separate science fiction anthologies: "Hereafter" in David Gatewood's Synchronic, "Liberty: Seeking a Writ of Habeas Corpus for a Non-Human Being" in Hugo award winner John Joseph Adams's Help Fund My Robot Army, and "Humanity" in The Robot Chronicles, which I organized (just in case my other two stories hadn't placed) and brought to fruition with David Gatewood.

Released in turn, all three anthologies marched up the Amazon bestseller charts. In just over two months from the publication of "Hereafter"—which was eventually named a Best American Science Fiction and Fantasy notable short story—I hit the Top 10 Science Fiction Authors on Amazon, peaking at #8.

When I approached authors and editor with the concept for what would become The Robot Chronicles, I had no inkling of how powerful the idea of a continuing anthology series would become. We followed it up with The Telepath Chronicles, The Alien Chronicles, and then in quick succession A.I., Dragon, Z, and on, and still readers wanted more.

Two years and fourteen titles later, The Future Chronicles series is now arguably one of the most well-known anthology series born of the digital publishing revolution, yet adhering to the principle that we are, as Gatewood has put it, "a place where a reader can reliably expect quality storytelling from start to finish."

Over 150 contributing authors, illustrators, editors, and an expanse of loyal Chronicles readers have powered each Chronicles title to become, by turns, the #1 Anthology title on Amazon, in its speculative fiction genre, whether science fiction, fantasy, or horror.

I've been told that this success and commitment to literary quality has also helped inspire other publishers to take risks with independent anthologies and anthology series—and the results are amazing. We've seen the charts rocked by the Beyond the Stars series, the UnCommon Anthologies series, the Mosaics series, the Canyons of the Damned series, Clones: The Anthology, Interspecies, and many more in the works.

The Future Chronicles itself has taken new risks with its continuing Alt.History line of titles. To our amazement here at the Chronicles, despite the risks, readers continue to embrace these new titles.

And so we come to Chronicle Worlds. In this line of anthologies, authors chart stories not around a single theme—A.I., immortality, doomsday—but set in shared universes, or in already-imagined worlds, exploring the potential of these rich worlds with more characters, more history, more imagined futures.

Worlds such this one…

…Where an immersive, virtual reality game is the gateway to an all-too-real, fantasy realm, as mapped out in USA Today bestselling author Anthea Sharp's Feyland.