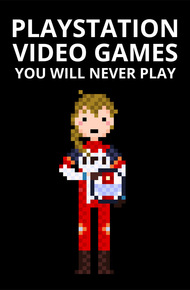 PlayStation Games You Will Never Play by Unseen64

Between Sony and third-party publishers, hundreds of games were released on the original PlayStation. In PlayStation Games You've Never Played, Unseen64 does a fantastic job sorting through the titles everyone's heard of to shine a spotlight on some of the system's rarely-talked-about finds. – David L. Craddock

Short Fuses (also known with its work-in-progress title "Popcorn") is a cancelled action game that was in development for the original PlayStation in 1997 / 1998 by a rather obscure but special team called "Eighth Wonder". What's so special about them? To explain the importance of this team we have to take a step back: in the nineties Rare was one of the most prolific teams focused on Nintendo platforms, releasing such popular games as Battletoads, Donkey Kong Country and Killer Instinct.

Loved by many Nintendo fans, Rare was one of the first teams to ever get their hands on Nintendo 64 development kits and in August 1997 they released Goldeneye 007, a game that sold millions of copies and probably helped to sell a few N64 consoles too, thanks to its great single player mission mode and the highly regarded multiplayer.

A few months before Goldeneye was released, the gaming world was shocked by a sudden news: a bunch of developers quit their job at Rare to create a new team funded by Sony Computer Entertainment Europe that would have created games exclusively for PlayStation. This new team was called "Eighth Wonder" and it was composed by Oliver Davies (game designer), Oliver Norton (software engineer), Steve Patrick (software engineer), Jeff Stafford (software engineer), Christopher Gage (artists) and Adrian Smith (artists, left the team a few months later), that soon were joined by Andrew Wood (artist) and Jemie Hemming (character design and creation).

The hype for this Ex-Rare team was high, and many gamers were expecting great things to be created by such a talented group of people. The deal had SCEE committed to publishing Eighth Wonder's first three projects, with an option to publish the next three too if the previous ones would have been successful, but the team never released any games and they vanished forever without any trace.

Short Fuses is the only game that was officially announced by them, and some information is available thanks to previews in old gaming magazines (Console+ magazine issue 78, Edge issue 60) and Websites. The game would have been similar to a 3D Bomberman clone but with puzzles and exploration elements that made the game a bit like Atic Atac, an old Rare title released in 1983 for ZX Spectrum and BBC Micro, in which players can explore a labyrinth with 3 characters, each one with their own secret passages available to open different parts of the levels.

Short Fuses featured six worlds, each with three levels, and after you beat the boss of each world you could progress to the next one, and use the boss as a new playable character. More than 10 playable characters including bonus / hidden ones were planned such as a knight or a female ninja.

As it happened with many Rare games, Short Fuses would have had beautiful graphics for its hardware and time, with lighting effects, high resolution graphics (512×240) and a consistent frame rate at 30 FPS. While the game would have been published by SCEE in Europe, at E3 1998 it was shown at the Sunsoft booth so it is likely that they could have been the American publisher.

Unfortunately Short Fuses never had the chance to be released: after a series of unfortunate events, a few months later Sony pulled the plug on the project and Eighth Wonder had to close down. We don't know what happened to most of its developers, as it seems that only a couple of them still work in the gaming industry. When Short Fuses was cancelled it would have needed just another three months to be fully polished for release.