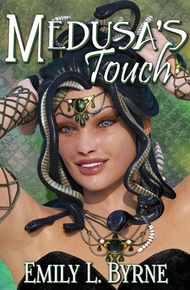 Emily L. Byrne's stories have appeared in such venues as Bossier, Spy Games, Forbidden Fruit, First, Summer Love, Best Lesbian Erotica 20th Anniversary Edition, Best Lesbian Erotica of the Year Vol. 2, First, Witches, Princesses and Women at Arms, Blood in the Rain 3 and The Nobilis Erotica Podcast. Her collections, Knife's Edge: Kinky Lesbian Erotica and Desire: Sensual Lesbian Erotica, are available from Queen of Swords Press. She can be found at http://writeremilylbyrne.blogspot.com/ and on Twitter at @emilylbyrne.

Medusa Pilot Captain TiCara X273, ex-street kid and former bondslave, thought she wanted nothing more than to be captain of her own starship. Or, at least, that was all that she thought she wanted until Sherin Khan came back into her life. A bar singer turned corporate rep, Sherin is now working for Ser Trin Vahn, one of TiCara's best clients and head of Vahn Corp.

Once they are thrown together on TiCara's ship, TiCara and Sherin can no longer deny their simmering attraction to each other. A simple mission to transport the ailing Vahn to the legendary asteroid, Electra 12, for medical treatments turns dark and dangerous as betrayal leads to betrayal. TiCara's greatest enemy is pursuing them, there's a traitor on her crew and Sherin has a secret that can tear them apart. Can they learn to trust each other before it's too late?

I'm really delighted to get this brand-new edition of Medusa's Touch for the bundle! This is perfect space opera, with all the trimmings: pilots who connect directly to their ships, twisty corporate politics, deadly dangers, and a sexy woman who isn't what she seems. TiCara is a smart, sexy heroine, and I loved spending time in her story. – Melissa Scott

The first ships left Earth when the air became too thick to breath without filters and the water was nearly gone. They carried the colonists and the supplies they needed to survive the journey to new, unknown solar systems. Each ship was emblazoned with a different corporate logo, designating the crew's sponsor. Each corporation sent its leadership as well as its research and development teams. And its security forces, each one large enough for the core of a small army.

Any corporation with enough credits could sponsor a ship. They were the de facto rulers of Earth by then. They could choose their own destinations, any solar systems their ships could reach and claim. As the generations passed, the biggest corporations expanded, claiming their own systems, their own quadrants. They formed alliances and rekindled old enmities. The Corps Wars that followed were inevitable, at least to those on the winning side.

The Wars rearranged the universe, leaving behind them a loose confederation of worlds dominated by corporate owners and independent operators. The central worlds were linked by a political and economic network that connected the human-inhabited systems under the United Systems Federation. Three hundred years after leaving Earth, humans and the four known alien species were united.

The Wars also created a new cyborg pilot, one who could fly the combat ships by mind-linking to the ship's computer. The links were implanted in the pilot's skull, replacing most of their hair with coiled metal tentacles that could plug into a ship's computer. The mindlink made the medusa ships more flexible and responsive than regular starships, nearly unstoppable in ship to ship combat, except by another medusa pilot who thought and reacted first.

Outside the corporate military, the pilots who choose the medusa operation were few. It was permanent or so they said: once a medusa pilot, always a medusa pilot. And once you got used to having the links, they took on a life of their own, like miniature hands. They defined who you were and how others viewed you. It was more than most spacers wanted, corp or shadow trade.

TiCara X273 was a war orphan on FoxCred Corporate Station, a child of barely thirteen cycles, when she saw her first medusa pilot. By then, she had also seen so many other things that to call her a "child" seemed inappropriate. In the eyes of station security, she was a thief, alley scum who could be used for target practice or worse. Hiding in a spaceship docking bay where she might be seen and captured in order to watch the medusa ships come in was tantamount to suicide.

She did it anyway.

The pilots, when they emerged from their ships, were as alien as anything that she had ever imagined. Their medusas moved independently of the pilots' bodies, like living things. The pilots themselves were strong and well fed, walking slowly in the station's heavier gravity but each step, each gesture, radiating a fierce predatory grace. The stars of a thousand systems shone in their eyes, piercing TiCara's heart until she could dream of nothing else.

Those dreams kept her going, driving her to do anything she had to do to qualify for the corporate starship crews and the medusa operation. Anything at all.