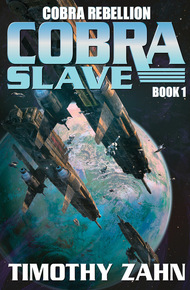 Cobras: technologically-enhanced warriors bred to fight an alien menace no ordinary human can withstand. At the center of action on Cobra world Aventine: the legendary Moreau clan. In times of war, the Cobras are necessary, yet in times of peace they are often reviled by those they have saved. Now the Cobras have resisted a second invasion of the alien Troft forces, and forced the Troft to a stalemate — and even converted some thoughtful Troft into uneasy allies against their kin.

Yet all is not well in the human sector of the galaxy. A supposed sister empire, the Dominion of Man, threatens the Cobra worlds with what is, in effect, enslavement, as it moves to consolidate power over all the Cobra worlds. The plan on Aventine: to extort from the Moreau family the location of the home planet of a mysterious human ally that may be more powerful than the Dominion: the Qasaman empire.

Meanwhile, Cobra Merrick Moreau is on a secret mission of his own to a world of humans enslaved by Troft masters. It is a world of barbaric cruelty where every human is slave chattel to Troft gamblers. There the Troft force whole villages, even children, into life and death struggles served up for Troft entertainment.

But the totalitarian Dominion of Man and the Troft game-masters are in for a rude surprise: Cobras are not merely technological marvels. They are far more. For within each Cobra, bred by close family ties and hard testing in battle, there beats the heart of a warrior and the burning conviction that a Cobra will be slave to no one. Rebellion is at hand, and once again, Cobras lead the fight for freedom.

For that first instant Merrick gaped at the predator in sheer frozen surprise. A heartbeat later, his brain caught up with him. Back on Qasama, he and Commander Ukuthi had both noted the curious fact that Troft ships were still capturing razorarms from the local forests despite the fact that the attackers had apparently already moved on Aventine, where they should have a ready supply of the predators. Part of the impetus for this mission, in fact, had been Ukuthi's curiosity as to what the Drim demesne was doing with all of those animals.

Apparently, Merrick had found one of the answers to that question. And with that answer had come a sudden huge problem.

Because he couldn't simply target one of the predator's kill points and fire a laser at it. It was absolutely vital that he keep his true identity a deep, dark secret. That was why Anya had spent all those hours trying to teach him how to fit in with her people. That was why he was still pretending to be mute, so that even after that coaching his foreign accent wouldn't raise eyebrows and questions. His mission—hell, his life—depended on it. So did Anya's.

But his mission also depended on him surviving the next thirty seconds. The razorarm's forearm quills were already fanning outward, the first indication that it was preparing to attack. Without his lasers or arcthrower, he didn't have a chance in hell.

From somewhere behind him, dimly heard through the thudding of his heart and his single-minded focus on the razorarm, came the violent rustling of vegetation and a chorus of whooping barks. Apparently, the fafir attack had begun.

And suddenly, he remembered the stick gripped in his hand.

It was an insane plan, really. But unless he wanted to simply give up and proclaim to the world that he was a Cobra, it was the only plan he had. Turning to put his torso square-on to the razorarm, hoping the noise of the battle behind him would cover up any stray sound, he fired a burst from his sonic.

The razorarm staggered slightly, its balance temporarily thrown off. Before it could recover, Merrick leaped forward and slammed the thorny end of the stick squarely across its face.

The predator howled in rage and pain, its quills snapping all the way out. Merrick continued his lunge forward, shifting the angle of his stick and slapping it across the predator's right foreleg. The impact flattened a section of the quills back against the leg. Before they could bounce out again he threw himself chest-first against the leg, his body pushing the quills the rest of the way down. At the same time he snaked his right arm up under the predator's head and around the back of its neck, squeezing his upper arm against its throat.

And as the angry howling abruptly turned into a labored snarl, he pressed the little finger of his left hand deep into the fur over one of the animal's kill points and fired his laser.

The razorarm went limp. Still holding its neck, he shifted his left hand to another kill point and fired again, just to be sure. Then, careful of the still-protruding quills, he released his grip and pushed himself away.

Only then did he notice that the sounds from behind him had stopped.

He spun around, fearing the worst. To his relief, Anya and the two men were still standing, still apparently in good shape, though Ville had a shredded jumpsuit sleeve and a long cut beneath it. Scattered around them were the fafirs: lean, hairy animals that seemed to be some strange combination of wolf and ape. A couple of them were sprawled unmoving on the road, but most of the handful still in sight were limping or loping rapidly away.

Apparently, the defenders' focus had been more on driving the attackers away than actually killing them. Merrick took a quick look at the downed fafirs, wondering if any of them might still be a danger, then raised his eyes to Anya.

She was staring back at him, her face suddenly carved from stone.

Ville was staring, too. So was Dyre. So were all three of the Streamjumper family.

Merrick hissed out a sigh. So much for his attempt to keep a low profile.

It was Gina who finally broke the silence. "Wow!" she said, leaning against her father's grip, straining to get a better view of the carnage. "What's that?"

Merrick felt a sudden surge of hope. So it wasn't his killing of the razorarm that had them all so awestruck. Or at least not just the killing. It was the razorarm itself.

Which, now that he thought about it, made perfect sense. Razorarms hadn't existed on Muninn until the Drims started hauling them here a few weeks ago. There was no reason why any of the others would ever have seen one before.

Anya apparently reached that conclusion the same time he did. "They're called razorarms," she told the others. "Merrick was trained to kill them in my master's version of the Games."

"Was he, now," Ville said, striding toward Merrick and the dead predator, his now-battered thorn stick swinging idly in his hand. "Impressive."

"I don't believe it," Dyre said flatly. "It's some kind of trick. Look at that thing—look at the muscles around its throat. He couldn't possibly have choked it to death."

"Maybe he beat it to death," Ville suggested, pointing at Merrick's stick and wiggling his fingers in silent request. Frowning, Merrick handed it over.

"Not a chance," Dyre said insisted. "Look at him. He hasn't got the strength for it."

"Your truth is lacking," Ville said. "He has strength aplenty." He lifted up the stick. "See for yourself—he didn't twist this off. He tore it off the trunk. Just tore it straight off."

Merrick winced. So that was how the others had done it. No superhuman strength, just a trick that probably everyone on this part of the planet knew.

Only he hadn't known it. And now, he'd exposed his genuine superhuman strength.

Or maybe not. Where there was one trick, why couldn't there be a second?

He looked back at Anya. Her face had gone rigid again. Forcing an awkward smile, Merrick gave a little shrug.

Once again, she caught on instantly. "Please—he's not that strong," she said scornfully. "It's simply a different technique."

"I don't know," Ville said, running his fingers across the torn end. "It looks pretty solid to me."

"Trust me," Anya said. "And as we speak of solid, the solid dark of night is soon approaching. We need to gain further distance before we settle for the night."

"She speaks truth," Leif spoke up. "The scavengers will soon be coming for their feasting. I don't wish to be here when they do."

"As do none of us," Ville agreed. Tossing aside both his stick and Merrick's, he headed back to the road. "I'll again take lead."

Merrick frowned at the discarded sticks, then looked at Anya and raised his eyebrows. She shook her head and beckoned to him. "Another hour, I think, and we'll find a spot for our overnight rest," she said. "We don't wish to weary the young one overmuch."

"If she tires, I'm certain our overstrong Merrick can carry her," Dyre muttered as he took his place at the end of the line.

"Enough talking," Ville called back from the front. "The fafirs are become active. We must now listen closely for their presence." He threw a small smile back at Merrick. "Perhaps Merrick will later show us his technique for obtaining thorn maces."

Merrick made a face as he fell into step beside Anya. Inventing a magic trick for them, right on the spot. He could hardly wait.