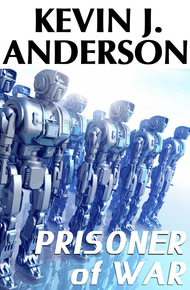 Kevin J. Anderson is the author of nearly 100 novels, 48 of which have appeared on national or international bestseller lists; he has over 23 million books in print in thirty languages. He has won or been nominated for the Nebula Award, Bram Stoker Award, the SFX Reader's Choice Award, and New York Times Notable Book.

Anderson has co-authored eleven books in the Dune saga with Brian Herbert. After writing ten Dune-universe novels with Herbert, the coauthors created their own series, Hellhole. Anderson's popular epic SF series, The Saga of Seven Suns, is his most ambitious work, and he recently finished a sweeping fantasy trilogy, Terra Incognita, about sailing ships, sea monsters, and the crusades. As an innovative companion project to Terra Incognita, Anderson co-wrote (with wife Rebecca Moesta) the lyrics for two ambitious rock CDs based on the novels. Performed by the supergroup Roswell Six for ProgRock Records, the two CDs feature performances by rock legends from Kansas, Dream Theater, Asia, Saga, Rocket Scientists, Shadow Gallery, and others.

His novel Enemies & Allies chronicles the first meeting of Batman and Superman in the 1950s; Anderson also wrote The Last Days of Krypton. He has written numerous Star Wars projects, including the Jedi Academy trilogy, the Young Jedi Knights series (with Moesta), and Tales of the Jedi comics from Dark Horse. Fans might also know him from his X-Files novels or Dean Koontz's Frankenstein: Prodigal Son.

The words pound through Barto's mind—commands, and a way of life. Barto is a genetically engineered soldier in a future war. He has body armor, enhanced reflexes, a laser lance as a deadly weapon, but he can kill with his bare hands as well.

His entire life has been designed for combat, to kill and die on the battlefield, to destroy the Enemy. That is all he knows. He doesn't have to worry about making complex decisions.

But when he is cut off from the rest of his squadron, freed from the constant drone of commands, he is confronted with the most terrifying crisis—the possibility of peace.

The first Enemy laser-lances blazed across the battlefield at an unknown time of day. No one paid attention to the hour during a firefight anyway. Neither Barto nor any of his squad-mates could see the sun or moon overhead: too much smoke and haze and blast debris filled the air, along with the smell of blood and burning.

A soldier had to be ready at any time or place. A soldier would fight until the fight was over. An endless Now filled their existence, a razor-edged flow of life-for-the-moment, and the slightest distraction or daydream could end the Now … forever.

With a clatter of dusty armor and a hum of returned weapons-fire, the defenders charged forward, Barto among them. They had no terrain maps or battle plans, only unseen commanders bellowing instructions into their helmet earpieces.

Greasy fires guttered and smoked from explosions, but as long as a soldier could draw breath, the air always smelled sweet enough. Somehow, the flames still found organic material to burn, though only a few skeletal trees remained standing. The horizon was like broken, jagged teeth. No discernible structures remained, only blistered destruction and the endless bedlam of combat.

To a man who had known no other life, Barto found the landscape familiar and comforting.

"Down!" his point man Arviq screamed loudly enough so that Barto could hear it through the armored helmet. A bolt of white-hot energy seared the ground in front of them, turning the blasted soil into glass. The ricochet stitched a broken-windshield pattern of lethal cuts across the armored chest of one comrade five meters away.

The victim was in a different part of the squad; Barto knew him only by serial number instead of a more personal, chosen name. Now the man was a casualty of war; his serial number would be displayed in fine print on the memorial lists back at the crèche—for two days. And then it would be erased forever.

Barto and Arviq both dove to the bottom of the trench as more well-aimed laser-lances embroidered the ground and the slumping walls of the ditch. As he hunched over to shield himself, the helmet's speakers continued to pound commands: "KILL … KILL … KILL …"

The Enemy assault ended with a brief hesitation, like an indrawn breath. The soldiers around Barto paused, regrouped, then scrambled to their feet, leaving the fallen comrade behind. Later, regardless of the battle's outcome, trained bloodhounds would retrieve the body parts and drag them back to HQ in their jaws. After the proper casualty statistics had been recorded, the KIA corpses would be efficiently incinerated.

In the middle of a firefight, Barto and Arviq could not be bothered by such things. They had been trained never to think of fallen comrades; it was beyond the purview of their mission. The voice in the helmet speakers changed, took on a different note: "RETALIATE … RETALIATE … RETALIATE …"

With a howl and a roar enhanced by adrenaline injections from inside the armor suits, Barto and his squad moved as a unit. Programmed endorphins poured into their bloodstreams at the moment of battle frenzy, and they surged out of the trench. The Enemy encampment could not be far, and they silently swore to unleash a slaughter that would outmatch anything their opponents had ever done … though this most recent attack was assuredly a response to their own previous day's offensive.

Moving as a unit, the squad clambered over debris, around craters, and out into the open. They ran beyond monofilament barricades that would slice the limb off an unwary soldier, then into a sonic minefield whose layout shone on the eye-visor screen inside each helmet.

With a self-assured gait across the no-man's-land, the soldiers moved like a pack of killer rats, laser-lances slung in their arms. They bellowed and snarled, pumping each other up. As he ran, Barto studied the sonic minefield grid in his visor, sidestepping instinctively.

From their embankment, the Enemy began to fire again. The smoky air became a lattice of deadly lines in all directions. Barto continued running. Beside him, Arviq pressed the stock of his weapon against his armored breastplate, pumping blast after blast toward the unseen Enemy.

Then a laser-lance seared close to Barto's helmet, blistering the top layer of semi-reflective silver. Static blasted across his eye visor, and he couldn't see. He made one false sidestep and yelled. He could no longer find the grid display, could no longer even see the actual ground.

Just as his foot came down in the wrong place, Arviq grabbed his arm and yanked him aside, using their combined momentum. The sonic mine exploded, vomiting debris and shrapnel with pounding sound waves that fractured the plates of Barto's armor, pulverizing the bones in his leg. But he fell out of the mine's focused kill radius and lay biting back the pain.

He propped himself up and ripped off his slagged helmet, blinking with naked eyes at the real sky. Arviq had saved his life—just as Barto would have done for his squad-mate had their situations been reversed.

Always trust your comrades. Your life is theirs. That was how it had always been.

And even if he did fall to Enemy attack, the bloodhounds would haul his body to HQ, and he would receive an appropriate military farewell before he returned to the earth—mission accomplished. A soldier's duty was to fight, and Barto had been performing that duty for all of his conscious life.

As he activated his rescue transmitter and fumbled for the medpak, the rest of the soldiers charged forward, leaving him behind. Arviq didn't even spare him a backward glance.