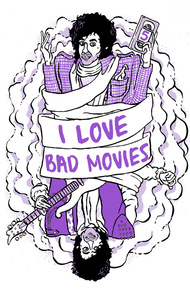 Kseniya Yarosh (Creator, Co-Editor) is a writer, illustrator, researcher, and Brooklyn Zine Fest co-organizer whose zines have been featured in The New York Times, Flavorwire, and Syndicated Zine Reviews. She is a co-host of the film podcast Bonnie & Maude, which examines movies from a female perspective. She has produced femme-centric video variety shows in Brooklyn, including You Are Hair and Watching You Eat. Kseniya is currently working on a zine about the Russian band ????? (Bravo) and the ‘80s rock scene in the Soviet Union. kseniyayarosh.com / bonnieandmaude.com

Matt Carman (Co-Editor) is the editor of Come on Down: True Game Show Tales, an organizer of the Brooklyn Zine Fest, and author of Taken for a Ride: My Night in the Cash Cab. He produces and hosts movie screenings and variety shows with his co-editor, including Flop Night at Alamo Drafthouse. His writing has also appeared in Blood Video, Physical Impossibility: Popcorn Droppers, and the RoboCop (1987) fanzine Thank You For Your Cooperation. He has appeared on podcasts Read it and Weep and Bonnie & Maude, and NPR’s Ask Me Another. carmanmatt.com

I Love Bad Movies #5 by Kseniya Yarosh and Matt Carman

Amy Adams trying to be sexy! Jim Carrey vamping and Nicolas Cage eating a cockroach! A Kirk Douglas fashion show via videoconference! Nicole Kidman BMX-ing! I Love Bad Movies #5 (themed “Before and After They Were Famous) is full of essays, comics, illustrations, and weird stills focusing on these and many more perplexing, entertaining moments from the strange outskirts of otherwise successful careers.

Ever wonder what Sharon Stone did with the Amish or what movie features Orson Welles in his final role? In this issue, dozens of writers, artists, comedians, and film nerds investigate the most entertaining bad movies made by all the big stars -- either before they were known, or after they should have stopped.

Our favorite zine makes fun of actors before they were famous. We enjoy reading these comedians’ essays before they become famous. – Geoffrey Golden, The Devastator

While it's hardly revered, Cruel Intentions has become a minor cult classic slash ideal time-filler for any cable network with "Turner" in its name. And why not? It stars a young Sarah Michelle Gellar and Selma Blair at peak hotness (or Ryan Phillippe, depending on your sex/orientation). It manages to frame a faithful-enough adaptation of Pierre Choderlos de Laclos' sixteenth century epistolary novel Les Liaisons Dangereuses in the guise of a late '90s teen sex romp, while still finding room for an extended girl-on-girl kissing lesson. And it has that hilarious scene where one young attendee at Ryan Phillippe's funeral (spoiler!) shakes his head disapprovingly, in majestic slow motion, after reading a Xeroxed copy of Gellar's diary, while The Verve's "Bittersweet Symphony" swells on the soundtrack.

In short, when I saw it at the age of twenty, it was pretty much the greatest thing ever.

Less loved was its follow-up, Cruel Intentions 2, which starred a young Amy Adams just two years into her film career. Surely an actress who so exudes innocence that three of her highest-profile roles have been a cartoon princess, a nun, and a Muppet groupie, must have been cast in the Selma Blair/Uma Thurman role—the innocent drawn into a perverse web of sexual manipulation.

In a word: petulantly. Her character's sexy pout seems less of a come-hither moue, and more like she's about to break out in a whine. "But I WANNA manipulate my step brother through quasi-incestuous means to destroy my social enemies!"

Even the sight of her getting a semi-nude massage alongside her mother, played by well known breast-haver Mimi Rodgers, is less likely to quicken the pulse than to make you think, "You know what? My shoulders are really tight. I should schedule one of those..."

BMX Bandits is an affable Australian B-movie for kids. It would have aged into a bizarre time capsule on its own, but it has the extra notoriety of capturing the dawn of Nicole Kidman's film career (her first role only narrowly edging this out). Supposedly the movie did alright domestically and in the UK, but I reckon the prominently non-American dialect—like saying "reckon" a lot—and occasional rugby game made US distributors uneasy.

The film's director, Brian Trenchard-Smith, is still in the midst of a prolific career. He's amassed a cult following with diverse credits such as Silk Stalkings, Leprechaun 3 and 4, Stunt Rock, and the promisingly titled Tyrannosaurus Azteca (Aztec Rex in the U.S.) In a video segment for Joe Dante's website Trailers from Hell, Trenchard-Smith takes some credit for championing the yet unknown 16-year-old Nicole against the producers' preferences. (Her look is more Little Orphan Annie than the central casting teen babe one would expect.) To his credit, he also heaps praise on cinematographer John Seale, who went on to be an Oscar winner and frequent nominee; and it's true, the moments of surreally colorful anamorphic splendor are chief among the film's pleasures.

Much as the title is just what happens when you try to alliterate something with "BMX," the plot is what you get when those two things come together. A gang of robbers are pressured by their scary boss to top a successful bank heist with a tricky armored car snatching. The job depends on being able to monitor police radio communications with an inbound shipment of special illegal walkie talkies (which sounds absurd but apparently scanners are against the law in Australia). Walkie talkies are surely the most 1983 of all possible MacGuffins.

We meet the two male protagonists cruising about suburban coastal Sydney, aimlessly popping wheelies and wreaking mild havoc upon cliché comic targets. P.J. (the amazingly named Angelo D'Angelo) is all swarthy athletic good looks and personality-free optimism, while Goose (James Lugton) speaks primarily in sarcasm and morbid jokes, delivered in a chilly drawl-enhanced monotone. Meanwhile, Judy (Kidman) is working at a supermarket and being simultaneously antagonized and hit on by the film's recurring annoying spoiled brat. This kid (who bears an uncanny resemblance to Susan Boyle) shoves the carts she was collecting into the parking lot, causing the BMX dudes to crash and damage their bikes, and her to be fired. But now the three become friends instantly, united by their lack of apparent family/jobs/social life. Kidman is a good match for them, bringing an upbeat blankness that would years later be honed into a deep, introspective blankness...

To repair their bikes and get Judy one too, P.J. and Goose set about getting quick cash the obvious way: stealing lobsters from traps. In the process they find and take the shipment of walkies, and unknowingly cross paths with the hapless crooks (David Argue and John Ley as "Whitey" and "Moustache," respectively) sent to retrieve it. No sooner than the trio starts selling the radios do we see Judy decked out with BMX proficiency of musical-montage proportions. Backed by pop music singing, "I never noticed my body changing, I still dance in the same old way with those bo-o-oys. I see boooooys," Judy's gender appears to switch back and forth as P.J. and Goose look on with their "check her out" faces on. According to Trenchard-Smith, tall, skinny stuntwomen were apparently unavailable, so they went with an 18-year-old boy in a wig.