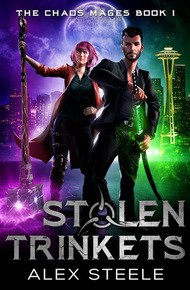 Alex Steele is the brainchild of husband and wife team: Alex and Stephanie. The persona you see online from Alex Steele is all Alex, but you can find his wife on social media as Stephanie Foxe.

Alex got his itch for writing after Stephanie began to write and publish her series. Previously, he'd never read books (I know crazy right?). He immersed himself in countless hours of research to better help his wife succeed. It was during that time that he began reading dozens of books and thought, "Hey maybe I can do this writing thing too." It turns out writing is hard (who knew?).

What he did learn is that he could outline stories reasonably well and that Stephanie enjoys writing his ideas. So, Alex Steele was born: Alex comes up with the overall concept, and Stephanie writes it. Alex then reviews it and makes edits. We pass that work on to an editor, then finally to ART (Advanced Reader Team).

We hope you enjoy reading the stories as much as we enjoyed writing them.

Do exploding vampires sound normal to you?

The IMIB doesn't think so either.

Supernaturals are getting possessed, wreaking havoc, then turning up dead. Blackwell and Swift have been tasked with finding out who is responsible and stopping them before they kill again.

Only one problem. They have never worked together before.

The chief appoints Swift as Blackwell's new partner claiming some nonsense about Blackwell being banned from New York for destroying the MET.

Swift is a stickler for rules. Something Blackwell believes are more like guidelines. She might be a fan of the rule book, but when it comes to the rules of engagement, she is smash first, ask questions later.

Swift learns that the dead can talk and Blackwell will have to stop blowing up cities to get the job done.

Old enemies, new threats, and more daddy issues than any women should have are bad enough, but sometimes our inner demons are the most dangerous. When they find the person responsible, Blackwell will face a fight he never expected, and one he may not win. But most importantly, will the pink ever get out of his hair? He should never have taken that bet..

It had been a few weeks since someone had tried to kill me. These attempts always ended in failure for the assassins; I just ended up late for work and got chewed out for making a scene. You'd think they'd give up eventually.

I adjusted my grip on the handrail and glanced over my shoulder at the crowded commuter car. A Japanese man with a goatee was at my five o'clock. He hadn't looked at me directly since we boarded, but he was watching my reflection in the shiny chrome trim on the interior of the passenger car. They had no windows due to something about the sight of inter-dimensional travel burning your eyes from your skull and melting your brain out of your ears if you ever gazed upon it.

Next to Goatee – the nickname seemed fitting – was a twitchy man wearing a hoodie pulled down far enough that I couldn't see his face. Tattoos extended down onto his fingers and thumbs that spelled out MAGIC BITES. He seemed…well adjusted.

Straight ahead was a blonde-haired woman dressed casually in jeans, a t-shirt, and a tailored coat that hugged her curves. She kept her body angled away from me, but every couple of minutes she looked past me at the two men.

A short sword hung at her hip, but that wasn't unusual. Many supernaturals carried a weapon but we had an old-fashioned idea about honor. No one carried guns, it was all blood and blades with us.

I glanced at the map that showed our progress. We were less than two minutes away from the stop. The would-be assassins wouldn't attack me before we debarked the Rune Car and left the station itself. No one could pay an assassin enough for them to martyr themselves trying to kill you.

Moira was heavily policed and protected supernatural city, but the Rune Rail system went above and beyond. It was guarded by Valkyries – how they got the Valkyries remained a mystery. They lurked, sight unseen, until someone threw a punch. Or drew a blade. Or cast any spell meant to harm. A few people managed to survive their retribution for a few seconds, but most vanished into a pink mist faster than you could blink. No one delayed the Rune Rail. Ever.

Everyone swayed forward as the passenger car came to a gentle stop. A wave of magic passed through the crowd that made my skin crawl. It wasn't exactly painful, but it was uncomfortable, especially since no one knew how it worked.

I kept my eyes forward as the crowd spilled out onto the platform. In my periphery, I could see the woman following me. The two men were most likely following me as well, but I wasn't going to make it obvious that I had spotted them. Yet. Of course it was possible I was mistaken and they were just stalkers. I got those a lot too and, try as I might, it was pretty much impossible to stop that entirely.

Two large escalators led up to the main floors of the Rune Rail Station. Everyone who wanted to stand waited in a neat line on the right, leaving room to jog up on the left if you were in a hurry. I thought about making my potential stalkers wait in the line on the right-hand side with me, but I was already cutting it close to get to work on time. If I had to have a conversation with them, I was going to be very late.

I hurried up the left side of the escalator. The Rune Rail levels of Moira were always packed; it truly was the city that never slept. Since there was no real sky to see, a combination of runes and technology – runetech – were used to illuminate the ceilings. It cycled through simulations of the skies, changing hourly, and was currently showing a cloudy, but sunny, sky from who knew where.

Moira – the city between worlds – was what started the Magical Revolution, uniting supernaturals and Prosaics after centuries of keeping our magic in the shadows. Moira was nowhere, and everywhere, at the same time. You couldn't find it on a map, but the Rune Rail connected it to every major city in the world. No one knew how it was created, or where the mysterious city was, but every supernatural wanted to be there.

It provided an oasis away from the Prosaics – what mages called those without magical talents. Twenty minutes or less and the Rune Rail could take you to any major city in the world you wanted. All you needed was a little magic in your blood. Of course, that meant trouble could follow you just as fast.

I let the crowd sweep me along until I reached what was colloquially known as the Crossroads. It was the first floor above the Rune Rail and home to some of the busiest shops, leading to a sort of pedestrian traffic jam. I went right and followed one of the smaller roads away from the mess. If this was going to get violent, I needed to be as far away from the crowds as possible.

As I walked past a storefront lined with glass, I kept an eye on the reflection. Sure enough, they were still following me. With a sigh, I glanced at my watch again. I was definitely going to be late.

The roads on each level of Moira were laid out in a precise grid. The farther out you went, the quieter it got. Some of the less glamorous businesses found a home out here. There were also run down apartments that housed the people who worked in Moira but were not wealthy enough to afford condos on the upper levels.

The crowd thinned to a trickle, then became non-existent. My stalkers were very obvious at this point. Goatee stayed about five meters behind me, and Hoodie paced me on the other side of the street. The woman, however, had disappeared at some point. That meant she was probably the one to worry about.

The business just ahead had a sign plastered in the window saying it had been repossessed due to non-payment of rent. A few meters beyond the building, the street ended at what was called the Edge. Reaching the borders of Moira was like reaching the edge of the world. It just ended, fading into a hazy darkness. A force field powered by runetech kept anyone from falling off, but being this close always sent a chill up my spine; it was like looking into the Abyss. Businesses stuck near the Edge never did well.

Whatever happened next was probably going to be messy. This seemed like as good a place as any to minimize potential property damage. I had a bit of an issue with causing that.

I stopped mid-step and turned to face the two men. "I don't suppose you just came to chat?" I asked, my tone hopeful. I liked to give mercenaries a chance to come to their senses. They never did, but it made me feel chivalrous.

Goatee frowned at my flippancy and took a step forward, cracking his knuckles. "You have given the boss enough trouble. Today it ends," he said in a deep, gravelly voice.

He could be talking about so many different people. I could ask which person he meant, but that normally just insulted them and was rather pointless.

"With just the two of you? Come on, last time they sent four." I grinned and rested my palm on the hilt of the katana hanging on my hip. The magic inside it rose to meet my own and I felt everything click into place. "We can wait for the lady to show up, but if you think that'll make me go easy on you, you're out of luck. I don't discriminate."

"I will enjoy the sound of your pleading right before I take your head," Goatee said. Without further monologuing, he rushed forward.

I drew my katana, the blade singing as I pulled it out of the sheath. The blade didn't glint in the light; the steel was pure black and seemed to devour the light rather than reflect it.

Goatee gestured, burning a rune right into the air. He thrust his hand against the blazing symbol, and a dagger of bright green light shot toward me. I cut through it, and the magic crackled around me as the spell broke and dissipated.

I pushed off the ground with my right foot, but a manhole cover pounded into my right arm and hip, slamming me into a wall five feet away. Several of the bricks crumbled from the impact of my shoulder, while I slumped to the asphalt. My kidney felt like…well, it felt like a fifty-pound manhole lid had just crushed it; and I was fairly certain it broke a rib or two. I would have to deal with the damage later.

The manhole cover slid away, sparking against the concrete. The woman stalked forward. Her coat was gone, and her long blonde hair waved around her as if she were floating underwater. That gave me an idea.

I traced a quick rune over the ground with my hand. The magic hovered in place, glowing bright orange. I wrapped my hand around the rune and, with a tight grip on my katana to keep from screwing it up, pumped it full of power. This was going to be fun.