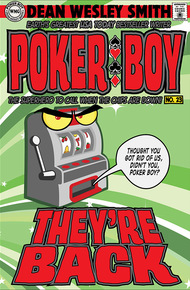 They're Back by Dean Wesley Smith

USA Today bestselling author Dean Wesley Smith brings back the Slots of Saturn in this short novel from the popular series featuring the superhero Poker Boy.

Poker Boy and his team destroyed the Slots of Saturn. They know they did. At least, they think they did.

But when people begin disappearing—again—poker boy must face what might just prove his greatest foe.

Not Possible, but Fact

"The Slots of Saturn are back," Stan, the God of Poker said to me as he slid into the booth beside Patty.

I laughed and pointed out the window. "Pig just flew by. Pink, a ribbon on its tail. Really flapping hard."

Patty giggled and shook her head.

Stan said nothing, didn't even laugh at my stupid joke.

Again he didn't laugh or even shake his head in disgust, which he often did when I got really silly.

Both Patty and I just stared at him, waiting for his punch line. He had just said that the Slots of Saturn were back. That had to be a joke with a really stupid punch line, because those monsters were not a laughing matter.

But no punch line was coming, at least none that I could tell. Trying to get a read on the God of Poker was just about impossible. He had the best poker face on the planet and with his tan slacks, button-down brown cardigan sweater and short brown hair, he could make himself invisible in a crowd without any powers at all.

"Serious?" I asked. "No flying pigs with pink ribbons?"

Patty and I had been having a quiet lunch in my invisible office, floating high over the Las Vegas strip. I should have known a wonderful day like today would have a crisis in the middle of it.

Just not this crisis.

Any crisis would be fine except this one.

Patty and I were both dressed in casual jeans and light shirts to spend the day together, since she had a day off from her job at the MGM Grand Hotel front desk. I still had on my black leather coat and fedora-like hat that was my uniform as a superhero. I just didn't feel comfortable going many places without them.

We had plans to tour the Mob Museum that both of us had wanted to see for a year, but hadn't found the time. Then we hoped to have a nice dinner and then go back to her apartment, watch a movie, and see what happened next.

I had been looking forward to that "next" part of the plan all morning.

And lunch in my office had seemed like a great way to start a relaxing and fun day together.

My invisible office floated a thousand feet over the Las Vegas Strip and consisted of four walls of windows and a diner booth smack in the middle of the room. The red vinyl booth had soft seats and could hold eight around the table with room enough for another two to pull up chairs on the end. It was patterned after Madge's imitation 1960's diner my team had met in for years down near Fremont Street in downtown Las Vegas.

An invisible door led from Madge's Diner to this office so that Madge, the waitress (who was also a superhero in the food service part of the gods) could wait on us in here. It was also the entrance for those without teleportation powers.

My office actually served as more of a clubhouse for the members of my team more than anything else. Sitting up here at night on a chair with your feet up on the railing looking out over the city and The Strip was always amazing and relaxing.

After hard days, a lot of the team members did just that.

There was also another invisible door that led to Patty's apartment where we stayed while in town. When we completed our new home we were building in the Oregon Coast Mountains, I would put in a direct door to this office from there as well.

Since Patty didn't teleport, that would allow her to get back to Vegas anytime she wanted from our new home in Oregon.

Patty Ledgerwood, aka Front Desk Girl, was my sidekick and partner and the woman of my heart. We met the first time The Slots of Saturn ghost slots had attacked the city. And we had been a pair ever since.

Now it seemed the ghost slots were back.

I just wasn't going to let myself believe it yet.

Madge came through the door from the diner with my cheeseburger and Patty's salad and a big basket of fries. She had already brought us both a large vanilla milkshake to share and had Stan's favorite strawberry shake on her tray as well.

She slid lunches in front of us and gave Stan his shake. Then she slid the fries over to an open spot at the end of the table and turned to leave without saying a word.

The fries only meant one thing. Laverne, Lady Luck herself, was on the way and had ordered ahead.

So the ghost slots really were back, even though that was completely impossible.

Screamer had taken part when we rescued over a hundred people from near death in the Slots of Saturn the first time. But wow, that was a long time ago.

Ten years ago, to be exact.

Screamer had the ability, among other things, to get into someone's head and read their thoughts and transfer those thoughts to others. He was a superhero working on the law enforcement side of the gods.

Ben was a god himself, just as Stan was. Ben had been the God of Lamplighters for centuries, but as they didn't need lamplighters as a profession anymore, he had faded. He had spent a lot of time over centuries reading and he remembered every detail. I got him moved over to work with the Gods of Books and Libraries to get him healthy again, and he had became a critical part of our team. He knew history and he knew all the politics and history of the gods. I couldn't believe how much he had helped us so far.

"So what Stan said is true?" I asked, looking at Screamer.

"We got ten people missing so far," Screamer said, nodding, "and my sources with the police think it might be a few more."

"But how?" Patty asked, her voice sounding as stunned as I felt. "We all three stood there outside that warehouse and watched those three slot machines be hauled off to be crushed and destroyed."

I glanced at Stan, who only shrugged. "We don't know, but we've seen security images of the Slots of Saturn appearing and taking someone and vanishing. Just as they did the first time. Exactly, actually. Same spots in the casinos. The locations they appear, that we know about, we now have blocked off."

"So they really are back?" I asked, the fear crushing any idea I had of taking a bite out of my cheeseburger, no matter how good it smelled.

"It seems that way," Stan said. "And we checked and they are not returning to the old Standard Machines warehouse."

"So we don't have any idea where they are stored this time?" I asked. That was how we had managed to deal with them the first time. We found their home.

"No clue at all," Lady Luck said, appearing and pulling a chair up to the table. She didn't grab a fry, but instead just sat there, staring at me.

And when Lady Luck just stares at you, that is not a good sign.