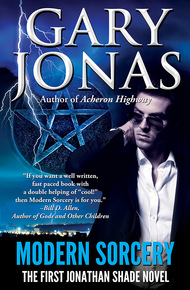 We all have "the one who got away." For me, that's Naomi Miller. Imagine my surprise when her father savagely murders her mother at a Denver grocery store. Cut to Naomi sitting in my office begging me to take her case because she thinks dark magic is involved. I know. Don't take the bait. But how can I turn her down? Maybe if I help her, we'll reconnect and things will be great. Now I'm dealing with magically engineered assassins, a corporation of wizards who hate me, and an ancient sorcerer with his own whacked-out plan. With all the dark sorcery flying around, it's a shame I don't have any magic of my own.

What I do have are Esther, a ghost from the flapper era who has a crush on me, but is bound to her typewriter, and Kelly Chan, a warrior who protects me when she feels I need the help.

When I stepped off the elevator and started toward my office, Esther stuck her head through the wall.

"Hey, Jonathan," she said. "There's a Sheba waiting for you."

"I hate it when you do that," I said, almost dropping my newspaper.

"Do what?" she asked, all innocent.

"That," I said, pointing at her head and neck protruding from the wall.

She gave me a grin. "You're just jealous."

I swatted at her with the Denver Post. She popped her head back through the wall and into my office. I sighed and entered Shade Investigations.

Esther sat on my desk, running a hand through her short, sleek hair. She kicked her legs through my potential client. Esther wore her standard short, shapeless flapper dress. Not that she had a choice. After you die, you're pretty much stuck with whatever you were wearing at the time. That will make you think twice if some clown asks you to try on a tutu.

"She called you earlier," Esther said. Although both her hands were empty, she maintained a posture as if she were smoking a cigarette with one of those long holders.

I ignored Esther because my potential client wouldn't be able to see or hear her. I died three years ago, and when I was brought back to life, one side effect was being able to see ghosts. It took incredible discipline not to react to someone who keeps talking to you, but I've been cultivating that skill. After all, it's bad for business when you enter a room talking to nothing. The client can't see anything, so who are you talking to? Could be a six-foot invisible rabbit, could be the ghost of Christmas Past, or more likely, you're crazy as a shit-house rat.

The client in question was female and had long, auburn hair that spilled down her back.

The woman turned at the sound of my voice, and I instantly recognized her. Naomi Miller, the only woman for whom I'd ever dropped to one knee and opened up a Tiffany's box to reveal a diamond ring. Of course, she was also the only woman to ever reject my proposal. She even went so far as to walk out of my life, never to return . . . well, until today. That was ancient history, but my brain sure kept that a secret from my heart. I felt like someone had gone all ninja on me and punched through my chest, dug his claws into my left ventricle, and yanked my heart right out of my body.

I forgot how to breathe for a moment. She was more beautiful than I remembered. It was all I could do to regain my composure. "Naomi," I said. I tried to make it sound indifferent, but the look on Esther's face told me I'd missed the mark.

I needed to sit down. Of course, when people show up at my office, it's generally safe to assume they're looking to hire me, but for a split second, I hoped she was really there to say the past five years were miserable without me and she wanted to get back together. She didn't look particularly miserable. She appeared a bit troubled, perhaps, but that's normal when you're hiring a private investigator. I walked around my desk and sat down in my high-backed, leather chair. I tossed the newspaper on the desk beside my laptop. Then I took a deep breath because I realized I hadn't inhaled since she'd turned around.

She gave me her hurt puppy-dog look. "I know we didn't part on the best of terms, but I need your help."

"You and this Jane were an item?" Esther asked, pointing at Naomi.

I tried not to react to Esther, and you'd think that three years of practice would create enough muscle memory that I could manage it, but evidently something showed on my face.

"You haven't even told me your problem."

Esther rolled her eyes. "You don't need to hear her problem. You still have the Johnson case to finish up."

Naomi looked at me. "You don't seem too interested in anything I have to say."

"No reason to be interested," Esther said. "She rubs me wrong."

I held up a finger. "Hang on a few seconds, and I promise to give you my undivided attention."

"Don't do it," Esther said when I got up and walked toward the filing cabinet.

I reached up and took down an old Underwood typewriter.

Esther followed me as I carried the battered typewriter out of the office and down the hall. I placed it at the edge of the stairs.

"This isn't fair!" Esther tried to follow me back to the office. She made it fifteen feet before she reached the end of her invisible leash and was jerked back a step.

She was bound to the typewriter, and whenever I needed some privacy, such as now, I simply had to move it far enough away.

Esther stood there, fuming, but I knew that once I walked away, she'd just sit down and wait. What else could she do? As I entered the office, I heard her grumble, "Fucker."

I closed the office door behind myself. Naomi waited by the desk.

"What was that all about?"

"Nothing." I opened a small refrigerator and pulled out a couple of bottles of Gatorade. "Thirsty?"

Naomi shook her head, so I returned one of the bottles to the fridge. I opened my bottle and took a drink. Naomi sat down so I leaned against the desk beside her chair.

"So what brings you back to my gin joint?"

She hesitated, as if making sure I was actually listening this time. Then she took a breath and just spit it out. "My mother was murdered last night."

She teared up. I reached for a tissue from the box on my desk. She reached for one at the same time, and our fingers touched. Our hands lingered perhaps a moment too long. I found myself wanting to hold her, tell her everything would be all right. But now I could feel the gulf created by five years apart, so I pulled back.

"They arrested my father."

"Already? They must have had solid evidence."

"They do. A bunch of witnesses and a store video recording."

"You haven't watched any TV since last night, have you?"

"It probably made the front page."

I grabbed the Post and opened it up. Sure enough, just below the fold was a story about the murder. I read it. According to multiple witnesses, Kathleen Miller, 55, entered a Safeway store at 6:00 p.m., grabbed a grocery cart, and started into the lobby. Her husband, David Miller, 57, entered the store behind her. An argument ensued that culminated with David driving a sword through Kathleen's heart. A security guard tackled David and, with the help of a customer, held him until the police arrived. Store security cameras captured the entire event.

"Sounds like an open-and-shut case of murder to me," I said, lowering the paper.

"And that changes things?"

I shook my head. "So you think the witnesses are lying and the DVD is fake?"

"I just think someone should look into it, and the police never will."

"Oh, come on. You, of all people, know that things aren't always what they seem."

"You're the only one who can help me. Please don't turn me away."

"I want you to prove that my father is innocent."

"Naomi," I said, "I know you want to believe he's a good man, but trust me when I tell you that you shouldn't hire me for this."

"This isn't a haggling session. It's a waste of time."

"You have friends on the police force. Will you at least take a look at the DVD?"

"I'd rather be buried naked in a pit of fire ants."

I know what you're thinking. You're thinking my ex-girlfriend is a total loon. Actually she's a low-level wizard from a long line of wizards. Her father is well respected in the magical community. Well, he was well respected. I doubted many people would hold him in high regard now.

I didn't say anything. Naomi stood and moved closer to me. She placed a hand on my arm. "Will you look?" she asked and met my gaze. "For me?"

Naomi's touch brought back too many memories—most of them good. Still, I didn't want to watch Kathy's murder. She was a nice woman and had always been kind to me even after the breakup. I stared into Naomi's eyes and opened my mouth to say no.

"I'll look at the recording," I said. Somehow that didn't sound like "no" to me.

Naomi hugged me. "Thank you so much."

"And I'll charge you my normal rate. I expect this to be over by noon, but you'll be charged for a full day."

"You can charge me for a week."

Naomi released me and tilted her head up to smile at me. "I knew I could count on you."

I smiled back at her, and one part of me thought things could work out. The other part of me was screaming that no good could come from this. David was obviously guilty, and proving that, which was a foregone conclusion in my mind, would not win Naomi back. It would drive her away forever. What can I tell you? My heart has selective hearing.