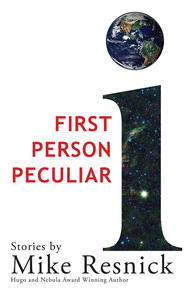 Some writing classes caution their students to avoid first-person stories—too traditional, too dated, too difficult to sell. We’ve convinced 5-time Hugo Award winner Mike Resnick to show you how it’s done with two dozen of his best first-person stories.

You want Hugo nominees? We got ’em.
Humor? Them, too.
Award winners and nominees? Yep.
Fantasy? But, of course.
Science fiction? Absolutely.
Sherlock Holmes? We’ve even got one of them.

Mike Resnick is, according to Locus magazine, the all-time leading award winner, living or dead, for short fiction. First Person Peculiar will explain why.

Mike Resnick has won more awards than any other author in the history of the genre and he stores them in a closet the size of a Tardis, I believe. Mike and I collaborated on a short story together, because I wanted to see how he writes such genius stories all the time. He promptly informed me that I don’t seem to write short stories; I simply write novels that are short-story length. So, I’ll keep writing novels, I suppose, and let him win all the awards! – Kevin J. Anderson

First person seems the natural way to tell a story, but it has traps for the unwary. This collection shows how to avoid the snares and still use the assets of the big I.

First person has its advantages, all on display in these trademark Resnick stories. For example, the literary term for a dominant character is “first person major,” the character who tells the tale and is the principal actor. Think about Philip Marlowe in Raymond Chandler’s great noir novels. (Resnick echoes this very well, somewhat tongue in cheek.)

Since the narrator is within the story, he or she may not have knowledge of all the events. Since the piece is spoken directly in the character’s voice, it is automatically strong, allowing the reader to decide whether they can relate to the protagonist’s position or not. The style limits the ability for description, though.

A “first person minor” point of view stands at a distance from events, but is not the primary actor. The point of view voice gives us perspective, though limited to just his or hers. Try The Great Gatsby, an American classic narrated by a friend of Gatsby. A good rule: If you’re going to kill the lead character, best not make him the point of view. The story ends when he does, unless you’re taking the reader into the afterlife. (But you can do that, in fantasy. To show you how that works, see “The Adventure of the Pearly Gates” with its remarkable opening, “It was most disconcerting. One moment I was tumbling over the falls at Reichenbach, my arms locked around Professor Moriarty, and the next moment I seemed to be standing by myself in a bleak, gray, featureless landscape.” Now that’s an opening.)

Most of the time, the first person guarantees that at least the narrating I is telling us the truth as he/she sees it. But sometimes, not so.

Real people are unreliable narrators all the time, even if they try to be trustworthy. To my taste, though, that I should not lie to me; I get enough of that in real life, thank you.

Of course, that I could be a we instead—the first-person-plural point of view. This occurs rarely, but can be used effectively, sometimes as a means to increase the concentration on the character or characters the story is about. Example: Fred Pohl’s Man Plus. One well-known and convoluted example of a multi-level narrative structure, using various first person voices, is Joseph Conrad’s Heart of Darkness. Even within this nested story, we learn that another character, Kurtz, told Marlow a lengthy story. We don’t directly get told anything about its content. So we have an “I” narrator introducing a storyteller as “he” (Marlow), who talks about himself as “I” and introduces another storyteller as “he” (Kurtz), who in turn presumably told his story from the perspective of “I”. It has a double framework: an unidentified “I” (first person singular) narrator relates a boating trip during which another character, Marlow, tells in the first person the story that comprises the majority of the work. Confusing, if you stop to think about it. The genius of Conrad is that you don’t. The story sweeps you along.

Mike Resnick knows all this theory. This collection shows it. For fast dialog that must be in first person, look at “The Gefilte Fish Girl.” For sheer audacity, consult “How I Wrote The New Testament, Ushered In The Renaissance, And Birdied The 17th Hole At Pebble Beach”:

So how was I to know that after all the false Messiahs the Romans nailed up, he would turn out to be the real one? Or dip into the simply titled “Me”:

In the beginning I created the heavens and the Earth.

He leaves you with a deft comedy that wrenches your head around, though agreeably, in “Here’s Looking At You, Kid”:

“I came to Casablanca for the waters.”

I defy you to not read on, after that. Resnick knows what he’s doing. You don’t need to look into the gearbox, though. Just sit back and enjoy the ride.