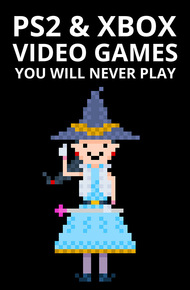 PS2 and Xbox Video Games You Will Never Play by Unseen64

With their PS2 Sony didn't simply win the sixth console generation - their second in a row, mind you. They walked so many victory laps, they were still going until the console's worldwide discontinuation in January 2013, one month before the announcement of the eighth generation console, the PS4. The PS2 went on to sell 155 million consoles worldwide; no other sixth generation console would reach even 30 million. Sony's reign started on March 4th, 2000, when the PS2 first hits store. Launching first in Japan, the PS2 wasted no time making its presence felt and went on to sell one million consoles on the first day.

Microsoft's decision to enter the video game industry during the sixth generation was, in hindsight, brilliant timing. Launching first in North America on November 15th, 2001, the Xbox's 24 million consoles sold indicated a distant second place finish to the PS2. But by making some bold gambles on design, Microsoft changed the landscape of gaming while also planting the seeds for their seventh generation harvest. When Microsoft developed the Xbox, they did so by leveraging their expertise in PCs. Designed from the inside out, like a PC, the Xbox's built-in hard drive and integrated Ethernet port for broadband internet - firsts for the industry - became standard features moving forward.

While 3D was already well tested with the previous generation, PS2 and Xbox games could boost new graphic effects, try new game play mechanics, take full advantage of double-analog controllers, create huge worlds to explore and offer proper online multiplayer to console gamers. This let to the conception of multiple ambitious and interesting games that were too ahead of their times or that were not supported by enough resources or team experience to be completed. In this book we'll take a look at one of the most fascinating generation of lost video games, through a series of promising or curious projects and lost sequels to classic titles.

The PS2 was the National History Museum of its generation, collecting a little bit of this, that, and the other, while the Xbox catalog, while inarguably smaller, boasted lots of quality. Unseen64's journey through both platforms' lost-and-found bin is well worth a read for any historians who thought they knew all there was to learn about this historic generation. – David L. Craddock, curator, StoryBundle

Maximo 3 is the cancelled third episode in the Maximo series, a game that many fans were waiting for, but unfortunately things went not as planned. The original Maximo: Ghosts to Glory is a 3D action game created as a spiritual sequel to the 2D Ghosts n' Goblins series, developed by Capcom Production Studio 8 and released for PlayStation 2 in 2001 / 2002. A sequel, Maximo vs. Army of Zin was released in 2003 and the third game was in the works by the same team, but after only a few months of development it was canned due to lower than expected sales from Maximo 2.

Maximo 3 was started soon after Studio 8 finished work on the second chapter (Maximo 2 ends with the promise of a third game, with Maximo and his allies teaming up to find Queen Sophia), and they created many concept arts, with new enemies, settings (an Arabian theme, inspired by the success of Prince of Persia: Sands of Time) and features. The "cartoony" feel of the original games was dropped for a more gritty look.

In the original design doc we can read more about Maximo 3's gameplay mechanics and story:

"Across the Southern Sea, in a land of exotic culture and great history, lies the city of Mashhad, the gateway to the ancient east, but lurking in the shadow of a proud people are the forces of blood and corruption. The Cult of Chut, a religious order legion with fanatics, is preparing to transform the city into a single bloody alter whose population will be the sacrifice in their apocalyptic ritual. But all is not lost: Maximo stands against this tide of destruction. Having followed the trail of his lost love, Maximo arrived in Mashhad with hopes that his journey will soon end. Now he will pit his sword and wits against the church's faceless leaders and rescue Sophia; the possessed conduit through which Chut makes itself heard. Maximo 3 stars with Maximo and his band in bad shape. In their quest for Sophia, the heroes have encountered the Cult of Chut, death worshipers who find a "man who walks with Death" an affront to their beliefs. As a result, Baron has been killed, Tinker maimed and Maximo and Grim have been merged into one, thanks to a curse. Maximo and Tinker have been hunting down cultist sects when they arrive in Mashhad, seeking revenge and a cure to Maximo's condition."

The new connection between Maximo and Grim would have been used as one of the main features of Maximo 3, needed to progress through the game:

"Maximo is covered in tattoos, which are actually the external manifestation of the cultist's curse that has trapped Grim within him. With the press of a button, Maximo transforms into Grim, allowing him several abilities. As a result of the curse on Maximo, turning into Grim drains Maximo's Health. Stay as Grim for too long and Maximo will lose a life. Only by collecting the souls of the evil cultists can Maximo sustain himself in Grim form. At some point in the game, Maximo will use Grim's form as a disguise to infiltrate the cult's tower during Chut Holy Day. Gameplay will have the players switch the two forms. As a phantom. Grim can slide up walls, flow like a shadow along walls, give a little extra distance to a jump and glide down from long drops. In addition, the player can perform several attacks with his scythe. Grim attacks do not always kill, rather they are used to "prep" an enemy for Maximo's attacks, such as breaking a cultist's protection spell or "mortalizing" ghostly foes. While in Grim form, the player cannot talk to innocents as they are too scared. However, Grim's attack will free the innocents of the cult's influence, turning them from enemies to normal innocents that Maximo must rescue from other enemies."

After this first concept phase, Capcom Studio 8 created an early playable prototype with a test level, which would later have been used as the hub world of the game. In this prototype, it was possible to interact with a few NPCs, climb upon its walls and fight with some enemies. There was only one functioning enemy type: a the basic cultist that can also be seen in the concept art.

Looking at this unfinished prototype and reading the design doc, it seems that Maximo 3 could have been the best game in the Maximo series, but unfortunately not much more work was done on it, as it was canned soon after the creation of this early demo. Some new items and weapons were also planned, such as the Sword Grapple to grab ledges, the Flintlock Rifle (a new gun-weapon type), Claws to climb up walls, the Crossbolt Gauntlet (to shoot bolts and to use it as a grapple hook to swing or to be pulled towards a secret area) and the Horn (to knocks enemies back and to cause parts of the scenario to shake and break to find new paths).

There was also a "lock on" mechanic, very much like the 3D Zelda games. Maximo 3 was going to be a much more ambitious project than Maximo 1&2 and would have taken the series into a full action-adventure game, more similar to The Legend of Zelda. The new lead designer was heavily inspired by exploration / puzzle aspects of Zelda, so the game was going to be more focused on exploration and to be less linear than the previous titles.

Capcom Production Studio 8 was full of talented artists and after they finished Maximo 2 they started to work on 3 interesting pitches: Maximo 3, DeVargas and Final Fight: Seven Sons, the unreleased FF that was planned before Final Fight: Streetwise. In the end, only FF: Streetwise was greenlighted from Capcom, but when it was released it failed to achieve mainstream success and it bombed in sales. Capcom decided to not invest in their California team anymore and sadly Production Studio 8 was closed down in 2006. Only a few concept arts, a video and a few pages from the design doc remain to preserve the existence of Maximo 3.