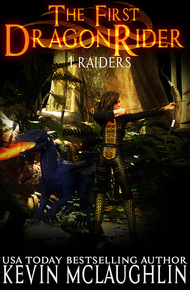 The First DragonRider by Kevin McLaughlin

The First DragonRider: Nothing is meaner than a hungry dragon. Except maybe a newly-hatched dragon, so when Valeria found herself scooped up and deposited into a dragon nest as snack-food, she figured it was all over but the munching. But what she thought was the end was actually the beginning of a saga which would bring two warring species together as partners. Can a dragon and a human form a bond strong enough to survive a world which will do anything to drive them apart?

Valeria felt again like she couldn't move. The red dragon snorted, smoke boiling from its nose. Then it stalked toward her and the baby dragon she held.

The dragonet struggled free from her hold and took a step toward the massive red. It opened its mouth and gave a short but loud squawk. The red dragon eyed the baby then all at once its head rushed in, jaws wide, teeth snapping shut.

Valeria thought the little one was done for, but the red hadn't struck to kill. Its teeth closed only inches away from the dragonet. It wanted the dragonet's fear, not just its flesh. Somehow that got past the terror locking Valeria's limbs in place.

She knew about people who wanted others to fear them. There were always human beings like that in the world. Probably always had been. Valeria guessed that perhaps the same was true of dragons. But she hadn't tolerated that from people, and she was damned sure not going to put up with it from a dragon, either!

In one fluid motion she nocked and arrow and fired. A second arrow was on its way to her bow before the first impacted. The first shot deflected off the red's scaled snout, but that got it to turn its head, veering away from her, which exposed the wounded around near its right eye. Valeria's second shot sank into the scales just under the eye.

The red dragon opened its mouth and roared, the volume enough to break through her hearing loss and shake the very stones beneath her feet. It clawed at its face and hammered its tail against the cliff face. Rocks rained down.

She'd hurt it! Good enough. Maybe it shouldn't have picked on someone helpless. Valeria doubted it would learn the intended lesson, but it was worth giving anyway. She readied another arrow.

The red stomped down hard in its anger and pain. Almost like slow motion, the rock ledge began breaking up. First cracks ran along the ledge, then chunks of it fell away. Valeria let her arrow fly and then reached out to grab the dragonet without even watching where her shot landed. If the ledge broke apart they'd both fall to their deaths, but the little nook in the cliff might be enough to shelter them.

Still holding the dragon, Valeria leaned back against the cliff. More rocks rained down, pelting her with sand, gravel, and debris. A stone the size of a fist rained down and struck her head, leaving her dizzy. A warm wetness spread down her forehead from the wound.

Valeria sheltered the dragon as best she could, trying to keep it from being hurt. Eventually the rain of rocks stopped. She looked up.

The ledge was entirely gone. Only a tiny outcrop remained, not enough to stand on. Her niche had turned into a perch. If she moved more than a few inches they'd both tumble to their deaths below.

Cool air brushed against her back, rustling her hair. Valeria looked behind her and saw the crack she'd worked on widening was now much larger. It was big enough to fit through, if she squeezed a little.

A warmer wind swept in from outside. The red dragon was circling, coming back around toward her. It didn't look happy. Exposed as she was, a simple swipe with a tail or small blast of flame would end her life.

She didn't know what was inside the fissure, but whatever it was couldn't be worse than what she faced outside! Valeria shoved the baby dragon through the crack and then slipped inside herself. The last thing she saw before she managed to get herself entirely inside was the red dragon's open mouth, closing in fast. Red fire was blooming from its throat. It had seen what she was up to and meant to cook her inside the crack!

The space was small, barely large enough for her and the dragon to both sit. But in the back, the little cave turned downward at an angle like a tube. There was no way to tell what lay down there, but no time to be cautious about it either! Valeria grabbed the small dragon and dove forward into the tube as flames gushed into the space behind her.

Her descent was fast enough that the dragon-fire never reached her, although she felt its heat. The tube dropped at too steep an angle for her to slow their progress, though. It was damp and slick enough to continue carrying them down despite her best efforts to stop.

Then all at once the tube was gone. The rock on all sides vanished. All Valeria could see was darkness, but she felt the wind against her face picking up speed as she clung desperately to the baby dragon.

They were falling through darkness with no way to tell where the bottom of their fall might be.