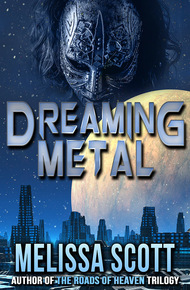 Five years after the Manfred riots, the question of machine intelligence is still a dangerous one on Persephone, and the coolie rights organization Realpeace is not prepared to let it go. For conjurer Celinde Fortune and her musician cousin Fanning Jones, the conflict is a distant one — until the murder of a popular musician raises the stakes for even the most determinedly uninvolved. And when Fortune acquires a new Spelvin construct to manage her magic act — one originally owned by an FTL pilot named Reverdy Jian — she is thrust abruptly into the middle of the problem. Because this construct is something different, and that difference can get them all killed.

Dreaming Metal by Melissa Scott—forerunner of several major science fiction tropes and winner of the Campbell, Gaylactic and Lambda awards—takes place on Persephone, a harsh world riven by class warfare (also the setting for Dreamships). Scott continues her sophisticated examinations of sentient AIs and the struggles of marginalized groups by showing the actions of three intertwined protagonists: high-tech stage puppeteer Celinde Fortune and her popular musician cousin Fanning Jones, both at the nexus of the violent protests swirling around granting AIs full rights while denying them to human laborers; and starpilot Reverdy Jian, whose "smart" construct may have achieved true consciousness. – Athena Andreadis

The woman coming down the stairs was tall for a coolie, but otherwise unmistakable, bronze skin and broad cheekbones and coarse black hair cut short as a line-worker's. Niantai Li was one of Fire/Work's two guitarists—the other one was coolie, too, unusually, just as it was unusual that my yanqui cousin should be their fx player.

"Trouble," she said, coming into earshot, and for an instant her voice trembled before she got it under control.

"What is it?" Catayong asked, and I reached under the sleeve of my conjurer's robe, found the spot between the bones of my forearm that controls my skin suit, and pressed to bring up the control disk. It hardened almost instantly, and I ran the controls to high. Instantly, the Empire's lobby blazed with light, a web of multicolored control bars and the hot pink dots of the tightbeam transmitters, and I swung in a full circle, seeing how the security beams blazed hotter orange than usual, too bright for normal use.

"Something's up," I said, and Li made a funny noise.

"What's wrong?" Catayong said again, and this time the sound Li made was almost laughter.

"What?" The sound of my own voice startled me, but Li went on as thought I hadn't spoken.

"By who?" Catayong asked. Over her shoulder, I saw the loiter-reader put down her tons and edge closer, drawn by the magic name. Micki Tantai was—had been, maybe—Hati's lead sign dancer, and their main face. He was also one of the few coolie supporters of machine rights—not Dreampeace, never that, but one of the few sane voices arguing that machine rights and coolie rights were two sides of the same coin. That was one of the reasons the band had split up, after the Riots, after Manfred was proved to be just another construct, a clever mimic of true AI, but Tantai and Hati kept the power of their names.

"Guess," Li answered, and the lottery-reader cleared her throat.

"Excuse me, but I couldn't help hearing. Did you way Micki Tantai was shot?"

"Who else?" Li asked, with real bitterness. She was a first-generation coolie herself, I remembered, came from Freya with her draftee mother when she was two or three. Realpeace claimed to speak for people like her, claimed to know what was best for them, and fusion—Hati and anyone like them—wasn't it. It was no wonder she sounded angry.

"Have they claimed it?" the lottery-reader asked.

Li shook her head, visibly shaking herself back to something like normal. "You know them. The news dogs are saying Realpeace, Jaantje said, but there wasn't a claim. Nothing official."

Catayong looked at me. "Anything on the wires?"

Because of my act, I had access to Tin Hau's lower-grade security, but this was obviously something bigger. I fixed my eyes and IPUs on the nearest security node anyway, and wasn't surprised when the pinlight refused to resolve into a shimmering veil of glyphs and realprint. "Probably," I said, "but I can't get at it. Security's set high, though." I looked around for Bixenta Teraz, an old friend who was Tin Hau's senior stage manager, then shook myself. She would be backstage already, setting up the matinee, not out here in the lobby.

"Something's not right," the lottery-reader murmured, looking toward the doors. I looked with her, and saw house security gathering.

"What exactly did Jaantje say happened?" I asked, and was careful to give his name its proper, coolie pronunciation.

Li took a deep breath. "He said that Micki Tantai'd been shot, outside one of the Zodiac arcades. That was all he'd heard—"

"Here he comes," Catayong interrupted. I followed her gaze, and through the haze of lights and glyphs—there was a transmitter in my line of sight—saw the rest of Fire/Work coming down the stairs. Behind them, on the lading, I could see more of Muthana's liveried security, gathering in twos and threes, big people in bright blue-and-gold bests. Tin Hau didn't usually need security, at least not in large numbers: whatever had actually happened, Muthana wasn't taking any chances.

I touched the control disk, damping the visuals, and the faces around me came clear again. Fanning gave me a nod of greeting—he was whiter than ever, his tan like dirt over his pallid skin—and said, "Are you getting anything from the house? I've only got basic clearance."

He was wired, too, though only the essential skinsuit. "Nothing," I answered, and Catayong spoke over me.

"Jaantje, what the hell is going on?"

Jaantje Dhao—he was the biggest of the band, a broad-shouldered, kinky-haired three-gen coolie from one of the pocket metroforms in Western Phoenix—gave her an odd look, his usual easy smile utterly vanished. "Didn't Tai tell you?"

"She said Micki Tantai'd been shot, but there's got to be more to it than that."

"Why?" the third man asked, with a bitter smile that did nothing to hide how close he was to tears.

"I caught it on the display outside the Shaft Three Station," Dhao said, speaking now to all of us as well as Catayong. Out of the corner of my eye, I could see the hand-drummer from Tigridi edging closer, hand over her mouth in a startling underworld gesture. One of the minders was listening, too, grim-faced, and I tried to catch his eye, wanting to ask what he'd heard. He looked away, but didn't move out of earshot.

"They were showing a vidi-clip," Dhao went on. "There was a crowd outside the Belmara—"

"Micki Tantawi was supposed to be there," Fanning interjected, and added *supposed to sign dance.* He went on aloud. "It was a benefit for that girl who got beat up last half-week."

Dhao node. "And Tantai was arriving, came in a runabout with a guy, I think he's in his new band, and when he got out, there was this swirl"—he mimed the crowd's movement, bit hands oddly helpless—"and this little guy jumps out of the crowd and Tantai goes down. Everything was confused, and then next thing you know the guy's gone, and Tantai's flat on the pavement. They ran the vidi-clip again in slow-time, and you could see the little guy had a gun."

"Did you hear the commentary?" I asked. There was no point in asking him about the realprint crawls line: I doubted he could read more than the standard glyphs.

"No." Dhao shook his head. "I was too far back. I saw the clip, and I headed in here. I thought maybe somebody would have more news."

"All the newsdogs are saying is that Tantai was shot." That was a new voice, the lurking minder, and we all turned to look at him. "They aren't saying by who—though some of them are speculating—and they aren't giving a condition."

"Elvis Christ," Fanning said, under his breath, and the lottery-reader said, "The guy with the gun—it really was a gun?"

We all looked at the minder again. Projectile weapons are restricted in Landage, mostly successfully so; if some maniac—some Realpeace crazy—had a gun, we would all feel a lot less safe tonight. The minder grimaced.

"I don't know. That's what the newsdogs said, so we have to assume it, though."

That wasn't the sort of thing the news dogs got wrong. The lottery-reader shivered visibly, and the girl from Tigridi said, "Was he wearing a sarang?"

There was a little silence. Five years ago, nobody wore the Freyan sarang any more, not even the oldest coolies, but in the aftermath of the Manfred Riots, a lot of the political coolies had adopted them as a visible reminder of what Manfred had meant for them. If Manfred had been true AI, and if Dreampeace had succeeded in winning full rights for it—and it was an article of faith among the political coolies that they would have—then the coolies, most of whom were Freyan contract labor, not citizens at all, would have had fewer rights than the constructs. Realpeace especially had adopted the sarang as one of their badges—you never saw their triumvirate, the trio who always represented them on the newschannels, in anything but the sarang and the traditional jacket—but for them it meant more than just coolie rights on Persephone, it meant opposition to the current Provisional Government and a return to the homeward. It was a tricky question, especially from an obvious midworlder, and I wasn't surprised when Dhao looked away.