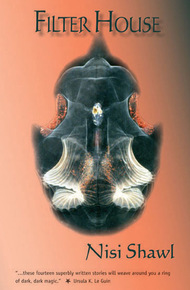 Nisi Shawl is an African American writer, editor, and journalist. They are best known for their science fiction and fantasy stories and novels dealing with race, gender, and sexual orientation. They live in Seattle, where they also write on political and cultural matters for the Seattle Times. Even before Shawl's steampunk-flavored alternate history of the "Belgian" Congo, Everfair, took the sci-fi world by storm, their short stories had already established them as a cutting-edge black writer whose politically charged fiction is in the grand feminist tradition of Ursula Le Guin, Octavia Butler, and Joanna Russ.

Nisi Shawl'ssteampunk-flavored alternate history of the "Belgian" Congo, Everfair, has taken the science fiction and fantasy world by storm. No surprise there. Their swift, sure, and savvy short stories had already established them as a cutting-edge Afrofuturist icon whose politically charged fiction is in the grand feminist tradition of Ursula K. Le Guin, Octavia Butler, and Suzy McKee Charnas.

Filter House is a collection of short fiction by Nisi Shawl, with an introduction by Eileen Gunn (author of Stable Strategies). The collection's fourteen tales offer a haunting montage that works its magic subtly on the reader's subconscious. As Karen Joy Fowler says, "This lovely collection will take you, like a magic carpet, to some strange and wonderful places."

Nisi Shawl's Tiptree Award-winning Filter House collects fourteen tales that encompass a wide and wonderful universe of experience from a Pragmatic Princess's feminist twist on a fairy tale trope to The Huts of Ajala's transactional monster sex and its consequences and rewards. Each story's unforgettable characters and deft, lyrical writing carry you from each reality to the next. – Tenea D. Johnson

We sat in a circle on the side of the street. Some of us had lawn chairs, or folding chairs we'd brought out from our houses. Stepstools, even. We had a bunch of different kinds of seats we were sitting in.

This was the day to commune with birds. It was a beautiful, cool, early spring morning. The pavement smelled clean and damp.

I was wearing a warm, comfortable caftan, embroidered with silver and dark colors. There were a lot of interesting-looking birds flying around low and purposefully, looking for the person they had a message for. It wouldn't do any good to get someone else's message, or to worry too much whether or not one was ever coming. We relaxed and watched the birds, and talked with neighbors who stopped by our circle. There were a few empty chairs. Eventually, someone might sit in them.

Suddenly, a bird approached me. It was a sort of bird I'd never seen before, a large duck with a sheeny, blue back, the blue of a clear sky just before dawn. I'd never seen a bird like this before, but I knew it was mine. It hovered awkwardly in front of me and gripped my index fingers with its webbed feet, pulling me. My heart lifted and I stood up.

The duck flew backwards, its feet still wrapped around my fingers. I went with it. It let go and turned to fly forward, and I followed it out of the city.

I wasn't about to let it get away from me. This was definitely my bird.

I saw a Great Auk from the corner of my eye, huge, black-and-white, with a broad, brightly-colored bill. It flew down a side road, but I stayed focused on my bird.

The paved road had turned into well-graded brown dirt, dark and wet. I saw houses that people were building: open, pleasing structures. I lost sight of my bird, but went on in the direction it had taken, out of the city. I stayed focused on it, even when I couldn't see it anymore.

I heard the soft beating of its wings and knew it flew on before me.

A stream joined me, running alongside the road. Daffodils joined the stream. Together, we left the houses behind.

I kept walking. I couldn't see my bird anywhere. I closed my eyes. The stream murmured to itself. The only beating I heard was my heart.

How could I catch up? Without wings, how could I fly?

I opened my eyes again and looked around. Where was I? Maybe this was where my bird had been bringing me. Maybe it had left me where I was supposed to be.

Tall trees with their leaves just beginning arched over the road. It was really more a wide path than a road, now. It moved among the tall trees slowly, one way, then -another, quite casually. As if it knew where it was going, but felt no rush to get there.

This didn't seem like a place to stop at, an end.

Maybe my bird had left me because I would be able to figure out everything on my own from here.

I saw sky through the trees. I went at the path's pace till I came to their edge.

It was quite an edge. Only clouds beyond. Very beautiful clouds, with popcorn-colored crests and sunken rifts full of shadows like grey milk.

It was evening already. I could tell by the light. I had been following my bird all day. How had that happened? I had lost track of the time.

That didn't matter, though.

My bird did matter. And its message for me.

It had to be around here somewhere.

The clouds' lighter parts changed and became the color of the insides of unripe peaches. Against them rose black flecks, the flocks of birds flying away from us. Away once more, until next year.

Silence stirred the hairs on the nape of my neck. Silence and a small wind fanned them so they extended upward. And outward. Up and out. Above my head, my bird flew forward, over the edge.

I went with it.