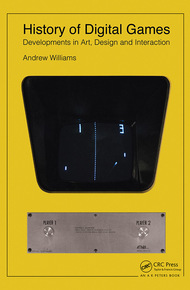 History of Digital Games: Developments in Art, Design and Interaction by Andrew Williams

The growth of videogame design programs in higher education and explosion of amateur game development has created a need for a deeper understanding of game history that addresses not only "when," but "how" and "why." Andrew Williams takes the first step in creating a comprehensive survey on the history of digital games as commercial products and artistic forms in a textbook appropriate for university instruction. History of Digital Games adopts a unique approach and scope that traces the interrelated concepts of game design, art and design of input devices from the beginnings of coin-operated amusement in the late 1800s to the independent games of unconventional creators in the present. Rooted in the concept of videogames as designed objects, Williams investigates the sources that inspired specific game developers as well as establishing the historical, cultural, economic and technological contexts that helped shape larger design trends.

Andrew Williams, Ph.D., is an Assistant Professor of Art and Design History at the University of Wisconsin-Stout in Menomonie, Wisconsin. He teaches a variety of graduate and undergraduate courses on digital games, fine art and design history. Williams also established and curated the vintage game collection of the Gaming and Digital Innovation Lab at UW-Stout in addition to maintaining his own catalog of games, game hardware and input devices.

In this more academic-focused volume, Andrew Williams tracks the origin of coin-operated games in the 1800s to the more digital, indie-heavy catalog of today to present a thoughtful look at how game development and design has evolved. It's a must-read for students and hobbyists who aspire to make games, as well as anyone interested in a history of the medium. – David L. Craddock

Nearly one-hundred years before the first appearances of digital arcade games, both mechanical engineers and artists created games designed to be visually attractive, easy to understand, and difficult or outright impossible to master. These design concepts were conditioned by a business model that centered on making money by having a high volume of customers pay low prices per trial. As such, the games would only be financially successful if play could start immediately and conclude quickly. While impossible to establish the absolute origin of these concepts, they are intimately connected to playing games in public spaces and are best illustrated by carnival games and games played on the midways of fairs. Combined with the very human desire to win or redeem one's self after failure, these ideas led to some of the most memorable, enjoyable, and profitable gameplay experiences of the nineteenth and twentieth centuries. This chapter explores the development of many of these ideas and discusses the companies, technologies, and personalities that helped hone a philosophy of game design that widely influenced the major gaming contexts of both the arcade and the home.

The Beginnings of Coin-Operated Amusement

The beginning of coin-operated machines dates to as early as the first century CE when the inventor Heron of Alexandria designed a device that used the force of a dropped coin to trigger a mechanism that dispensed water for purification rituals. While Heron's design was strikingly forward thinking, the classic coin-operated videogame arcades of the last quarter of the twentieth century relate more directly to the technological and economic changes brought about by the Second Industrial Revolution of the late 1800s and early 1900s. Three major types of coin-operated amusement machines emerged from this period: the first were noninteractive working models that brought kinetic delight to audiences; the second were monetized versions of testing devices designed for use in public spaces; and the third were viewers that allowed individuals to look at a series of two-dimensional (2D) still images, three-dimensional (3D) stereoscopic images, or early motion pictures. The creation of these new coin-op devices illustrated complex changes in the industrialized nations of the late nineteenth century as the public found itself increasingly able to not only spend money, but also spend money on quick bursts of amusement-related activities.

Since the medieval period, European engineers applied the knowledge associated with clocks to create mechanically animated amusement devices called automata. The variety of automata was vast, ranging from mechanical birds that sang songs, to automated devils who made grotesque expressions to congregations of Christians. Over the course of several hundred years, the works became increasingly specialized and elaborate, leading to lifelike recreations of movement and behavior. The production of automata in the eighteenth and nineteenth centuries by Swiss, German, and French clockmakers was particularly noteworthy, as their creations displayed sophisticated mechanical programming stored on irregularly shaped discs called cams; an early form of read-only memory and a key component of later mechanical amusement devices.

Jacques de Vaucanson created the Canard Digérateur or "Digesting Duck" in 1739 that flapped its wings, ate, drank, and even simulated defecation. In 1785, Peter Kinzing and David Roentgen gifted France's queen Marie-Antoinette with an automaton that played a miniature dulcimer by actually striking the strings with a hammer, all the while making subtle movements with its head and eyes. Perhaps, most impressive was the Draughtsman-Writer created by Henri Maillardet around 1805, which drew four detailed scenes and wrote three poems in script; two of which were in French, the other in English. This automaton had the greatest amount of programming and memory capacity of any produced of the time, yet it, like the others, consisted solely of gears, cams, and wound springs. Such masterworks of science and invention served as amusements for the wealthiest European nobles. The larger public had relatively little experience with automata until they appeared as a part of magic show acts in the later nineteenth century. The full introduction of these devices to the public, however, came in the form of coin-operated working models.

Working models first appeared in England and then spread to the rest of Europe and the United States. They typically consisted of an animated scene or object, sometimes accompanied by music that created an audiovisual experience. One of the earliest designers of working models in the United States was William T. Smith who created The Locomotive in 1885 (Figure 1.1). Inserting a coin made the miniature locomotive come to life as music played while pistons drove the wheels and levers pulled a string to ring the engine's bell. Although entirely made by hand, the battery-powered model was produced in large quantities that allowed for wide distribution. Fitting the device's theme, Smith's working model was commonly placed in railroad stations to maximize exposure to a constant stream of potential customers.

Similar examples from Europe, such as coin-operated singing birds created by French automaton designer Blaise Bontemps, attracted people who frequented public spaces and emerging amusement centers. In addition to machines and animals, working models also featured elaborate scenes of animated puppets. In England, for instance, the Canova Model Company produced a number of working models employing sensationalism that illustrated scenes of drama and horror, much like British "penny dreadful" novels. One such example was The French Execution (1890), which showed the execution by guillotine of a convicted criminal. Another working model by Canova Model Company showed animated figures suffering from opium addiction while being visited by horrific characters. Despite a sharp decline of popularity in the early 1900s, working models were produced well beyond the 1950s, with one of the most popular being the life-size animated "grandmother" or "gypsy" fortuneteller who consulted crystal balls or tarot cards before dispensing a written fortune.