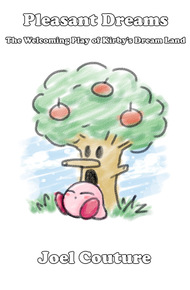 Games are ruthless things, designed to be overcome. They are mountains to be scaled. Opponents to be fought. Foes to be stomped.

But do they have to be?

Kirby's Dream Land seems like an easy, unassuming game, but is a title that upended what the medium was about. It was an experience built so that all players would feel welcome in gaming, designed to teach people how to play and how to enjoy their time within the world of games regardless of skill level. It turned up its nose at the perception that games had to be hard to be valuable, instead showing the power to be found in allowing all to feel the joy of playing games.

Pleasant Dreams: The Welcoming Play of Kirby's Dream Land offers an unofficial in-depth analysis of the elements of Kirby's Dream Land's design that opened it up to players who might not be traditionally "skilled" at games, as well as the writer's own story of finally feeling like games were something he could enjoy. Peppered with discussions and fond memories from developers and game journalists who grew up with Kirby, it looks to examine the attitudes around difficulty in games, the elements that made Kirby's Dream Land more than just an "easy" game, and how accepting yourself (with help from a cheerful puffball) can help you finally find the ability to grow.

If ever there existed an opposite to A Nightmare on Elm Street's Freddy Krueger, Nintendo's delightful pink beachball-shaped Kirby is it. Joel Couture takes readers on a dreamy tour through Kirby's most well-known outing in a read that's as fun as it is informative. – David L. Craddock

"No big hair. No big muscles. No weapons. Nothing. All Kirby's got is…appetite."

I don't know what it was about the ad for Kirby's Dream Land that sold me on it the instant I saw it. Maybe it was the cute artwork and enemies that were so far removed from the gruesome aliens and monsters I'd been used to seeing in games? Maybe it was the puffy hero that ate its enemies and could take flight with a little puff of air? Maybe it was something about Kirby being so unassuming, yet still coming out on top overall?

Maybe it was the cartoon comparison between Kirby and the musclebound, nameless hero that our adorable friend would DEVOUR WHOLE before the commercial's end?

I don't know exactly what it was (probably not the sickening ooze Kirby reduced that poor guy to WHY WERE THE 90'S SO GROSS ALL THE TIME), but the game got its hooks in me as soon as I saw it. Not that I could do anything about it at my age, but I did put in a request to get it at the next gift-giving holiday. It was going to be so much fun when I got it!

Well, fun for a few stages. Games of the time weren't exactly within my level of skill. In the era of Castlevanias, Mega Mans, Ghosts N' Goblins, Double Dragons, and various other titles that were savaging kids at the time, I was not exactly known for my prowess. I enjoyed a lot of these games, but I just couldn't make it further than a level or two in each of them. I'd boot them up and give them a shot every few days, always with the hope that I'd make it a little bit further, but that was it. I didn't expect to finish any of them. I wouldn't ever get that good.

Not that I expected to good at much of anything at the time. I was a pale, clumsy child who didn't show much aptitude for anything that required skill. Especially sports, despite trying several. The dreaded gym class would often mean playing yet another sport I had no ability at, and all while the better players yelled at me to just pass them the ball, already.

It's hard to get any better at a sport with everyone screaming at you to hand off the ball without thinking, isn't it? How are you supposed to get any better if you don't have any time to practice? To play without everyone piling on you because THE TEAM NEEDS TO WIN AT ANY COST? So, sports kind of stressed me out, and I wanted nothing to do with them.

I was the cliché nerd. Except I wasn't any good at video games, either.

These games had been built to resist being beaten, though, so it only makes sense. Coming off of the arcade era, where games made bank based on how many coins you had to sink into them to win, home consoles hadn't really figured out that they didn't have to play that way. Developers were used to creating mountains of challenge for players to climb, and if you didn't have what it took, don't expect much in the way of help. Maybe a cheat code or two, but those would only get you so far.

As an uncoordinated kid with lousy reflexes, I was far from the type of person who was likely to finish any of these games. And it's not like I was able to practice much, either, as once these games got hard, I tended to die in a hurry, then find myself back at the start. I'd get pretty good at those first few stages, but anything further was just a dream. Honestly, at the time, sports and games were starting to feel an awful lot alike.

I loved Nintendo Power during this period of my life for this reason, I think. After grabbing a few dozen issues off of some dude at a yard sale for ten cents each (and lugging them home in two huge bags that dangled from my bike's handlebars), I would read up on games, poring over the maps and tips. I got to live through beating these games in a way through these issues, with the maps unveiling those secret places I didn't think my skills would ever take me to.

Those issues were a kind of travelogue for me – a means to visit the exciting, dangerous digital places my own hands weren't able to take me to. I still derived a lot of joy from visiting them in that way, too. But I did always dream that I'd be able to see those levels for myself one day.

So, when my birthday rolled around and I found myself with a small, square gift in my hands, I was excited, but not too much. I thought I'd get through a few levels of Kirby's Dream Land and that would be it.

I wasn't expecting a game that would change my life.