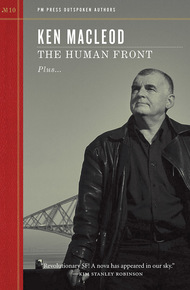 Ken MacLeod is one of the brightest and most progressive of Britain's new "Hard SF" stars who are navigating exciting new futures, to the delight of a growing legion of fans around the world. His award-winning works combine cutting-edge scientific speculation, socialist and anarchist themes, and a deep humanistic vision. Described by fans and detractors alike as a "techno-utopian socialist," MacLeod delights in engaging recognizable characters in far-flung adventures across the boundaries of space and time.

Born in Scotland's legendary Outer Isles, MacLeod graduated from Glasgow University with a degree in zoology and has worked as a computer programmer and written a masters thesis on biomechanics. A regular in British SF and progressive circles, he is married and has two children. He lives in South Queensferry, Scotland.

The Human Front by Ken Macleod

Ken MacLeod is one of the brightest and most progressive of Britain's "Hard SF" stars who navigate exciting new futures to the delight of legions of fans around the world. His works combine cutting-edge scientific speculation, socialist and anarchist themes, and a deeply humanistic vision. Described by fans and adversaries alike as a "techno-utopian socialist," MacLeod thrusts his characters into uncanny encounters that have included AI singularities, divergent human evolution, and posthuman cyborg-resurrection.

In his novella The Human Front, a young Scottish guerrilla fighter is drawn into low-intensity sectarian war in a high-intensity dystopian future, and the arrival of an alien intruder (complete with saucer!) calls for new tactics and strange alliances. Its companion piece, "Other Deviations," first published in this edition, reveals the complex origins of MacLeod's alternate history.

Plus: "The Future Will Happen Here, Too," in which a Hebridean writer celebrates the landscapes that shaped his work, measures Scotland's past against humanity's future, and peers into the eyes of an eel.

And Featuring: our irreverent Outspoken Interview, a candid and often cantankerous conversation that showcases our author's deep erudition and mordant wit.

Like most people of my generation, I remember exactly where I was on March 17, 1963, the day Stalin died. I was in the waiting-room of my father's surgery, taking advantage of the absence of waiting patients to explore the nicotine- yellowed stacks of Reader's Digests and National Geographics, and to play in a desultory fashion with the gnawed plastic soldiers, broken tin tanks, legless dolls and so forth that formed a disconsolate heap, like an atrocity diorama, in one corner. My father must have been likewise taking advantage of a slack hour towards the end of the day to listen to the wireless. He opened the door so forcefully that I looked up, guiltily, though on this particular occasion I had nothing to be guilty about. His expression alarmed me further, until I realised that the mixed feelings that struggled for control of his features were not directed at me.

Except one. It was with, I now think, a full aware- ness of the historic significance of the moment, as well as a certain sense of loss, that he told me the news. His voice cracked slightly, in a way I had not heard before.

"The Americans," he said, "have just announced that Stalin has been shot."

"Up against a wall?" I asked, eagerly. My father frowned at my levity and lit a cigarette. "No," he said. "Some American soldiers surround-

ed his headquarters in the Caucasus mountains. After the partisans were almost wiped out they surrendered, but then Stalin made a run for it and the American soldiers shot him in the back."

I almost giggled. Things like this happened in his- tory books and adventure stories, not in real life. "Does that mean the war is over?" I asked.

"That's a good question, John." He looked at me with a sort of speculative respect. "The Communists will be disheartened by Stalin's death, but they'll go on fight- ing, I'm afraid."

At that moment there was a knock on the wait- ing-room door, and my father shooed me out while welcoming his patient in. The afternoon was clear and cold. I mucked about at the back of the house and then climbed up the hill behind it, sat on a boulder and watched the sky. A pair of eagles circled their eyrie on the higher hill opposite, but I didn't let that distract me. After a while my patience was rewarded by the thrill- ing sight of a V-formation of American bombers high above, flying east. Their circular shapes glinted silver when the sunlight caught them, and shadowed black against the blue.