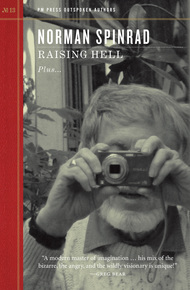 One of the original gang who created science fiction's controversial "New Wave" in the 1960s, New Yorker Norman Spinrad is SF's original outlaw, known for his often hilarious and always fearless attacks on the sacred cows of both the Right and the Left. Alternately censored and celebrated for his novels (including The Iron Dream and Bug Jack Barron), he has also written for the original Star Trek and twice served as president of the Science Fiction Writers of America.

As an ambitious, alienated, and awesomely talented kid from the Bronx, Norman Spinrad rode the revolutionary "New Wave" of 1960s science fiction to fame, if not fortune. His usually angry, often hilarious, and always radical novels changed the field forever. Once devoted to interplanetary adventure, SF began to explore the uneasy intersection between today's illusions and tomorrow's dystopian disasters. It grew dark, grew wild, grew up.

An all-new novella designed to take a poke at both Christian fundamentalists and corporate CEOs, Raising Hell is a rousing account of the fight to improve working conditions in Hell, for both demons and the damned, with the help of such deceased immortals as Jimmy Hoffa, John L. Lewis, and César Chávez.

Plus...  "The Abnormal New Normal," an impolite inquiry into today's high-finance low-jinks, which unmasks the manipulations of the 1% and proposes a radical fix.

And Featuring: our Outspoken Interview, the usual mix of intimate revelation, gossip, and tales from the front lines of writing and publishing.

"Supposed to. Nothing personal."

Last thing Jimmy DiAngelo could remember, he was croaking in a hospital bed, and now here he was, poked in his naked butt by an electric taser in the form of a pitchfork wielded by a scowling seven-foot-tall red demon built like an NFL defensive lineman.

Sulphurous fumes. Hundred-degree heat and satu- ration humidity worse than Labor Day Weekend in New Orleans. Stink like a locker room full of a season's dirty sweat socks soaked in cat piss. Okay, so Father Dewey and the nuns had never told him there would be a long line of the damned snaking up, around, and down, up, around, and down, through a maze of red-hot barbed wire in a puke-green terminal you'd expect in an airport in Lower Slobovia toward what looked like a barricade of customs booths. But still . . . the billowing flames beyond . . . Giant red demons with arrow-pointed tails and electrified pitch- forks, Satan's homeboy goon squads . . .

No doubt about it. It was Hell.

Dirty Jimmy DiAngelo couldn't honestly or even dishonestly say that he was surprised to have ended up in Hell. After all, he had been advised to go there more times than he could count, and it was the general opinion of most other union honchos that this was where the founder and de facto President for Life of the National Union of Temporary Substitutes, or NUTS, belonged.

The other union bosses called NUTS the National Union of Temporary Scabs whenever they got face time on the tube, which was not often these dim days, and they would've kicked NUTS out of the AFL-CIO if Dirty Jimmy had ever seen any reason to join up with those pan- sies and losers in the first place.

The way he saw it, with the American union move- ment sliding down the willy hole ever since Reagan broke the Air Traffic Controllers because by then Jimmy Hoffa was out of the picture and Lane Kirkland didn't have the balls to call a general strike, it had been either a one-way ticket into the shitter or the survival of the shittiest.

Choosing the latter, Jimmy DiAngelo had taken pride in being called Dirty Jimmy, for as one wise guy put it, winning may not be everything, but losing is nothing, and nice guys finish last. He hadn't built NUTS from an admittedly down-and-dirty idea into the only union in the US of A worth its dues by singing "Solidarity Forever" but by kicking corporate ass.