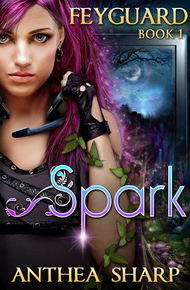 What if a high-tech computer game was a gateway to the treacherous Realm of Faerie?

Superstar gamer Spark Jaxley's life might look easy, but she's part of an elite few who guard a shocking secret; the Realm of Faerie exists, and its dark magic is desperate for a foothold in the mortal world.

Aran Cole hacks code and sells his gaming cheats on the black market. It's barely a living, and one he's not proud of. But when he turns his skills to unlocking the secrets behind Feyland–the most exciting and immersive game on the market–he discovers power and magic beyond his wildest dreams.

Spark's mission is clear; pull Aran from the clutches of the fey folk and restore the balance between the worlds. But can she risk her life for someone who refuses to be rescued?

Science-Fantasy is an odd hybrid to write, but since I was raised on both computer games and fairytales, it's a natural place for my books to live. Spark features hackers and dark faeries, a female professional gamer, and a quest into a magical realm that's every bit as real—and deadly—as the human world. –Anthea Sharp

Aran Cole slid on the fake glasses with the dark frames, and turned to face his friend, Bix Chowney. The flickering fluorescent light in Bix's old garage cast a sickly glow over everything, but Aran was fond of the place; lumpy couch, faint mildew smell, and all.

It was the closest thing he had to a home. All he needed was a place to sleep, a hotplate, and power for his sim system. The Viper was installed in the corner, hidden under a tarp when he wasn't gaming.

Bix tilted his head, the light giving his blond hair a greenish cast. "Boring, and respectable. That's freaky, man. How'd you do that?"

"It's all in the attitude. I just imagine I'm a geeklet from a nice, suburban family, and presto! No more slacker gamer."

He'd also re-dyed his hair to its underlying black, removing the blue streak, and had changed into the one button-down shirt he owned. His other shirts were all logo tees featuring obscure bands or gamer jokes, and he needed to project a more upper-class persona. At least until he passed through SimCon's registration.

"You making fun of me?" Bix punched his shoulder, hard enough to make it count.

"Hey—not my fault you're all well-adjusted and middle class. But you're not a geeklet."

Bix wanted to be edgy, but befriending Aran was the nearest he got. Not that Aran would recommend his particular lifestyle. Even Bix didn't know about Aran's other existence as the prime hacker known as BlackWing. He could find the exploits in any game, slipping in between the cracks in the code. Sadly, selling game hacks on the gray market wasn't making him rich. In fact, it was barely enough to survive on.

He needed enough cash to get his own apartment instead of couching it at Bix's and living off high-jolt soda and packaged ramen.

Aran's folks would feed him, grudgingly. Even though he was eighteen now, he still had a room at home. It stayed empty, though—just a place to store his stuff. That house held too much history and not enough forgiveness. Not even close. Unsaid words piled up like knives until he felt he was being sliced alive by their sharp edges.

He swigged the last of his super-caffeinated drink. The carbonation stung his throat and nose, but he needed the boost. It was way too early for him to be awake.

Bix followed him out of the garage, carefully locking up. Aran had an extra key, though he'd resorted to climbing through the back window a couple times to keep Bix's parents from seeing him. He didn't think the Chowneys would approve of Aran squatting in their old garage. Not that they ever used it, with the fancy new construction they'd built out front to house their grav-cars.

The metro stop was six blocks away. Aran hunched his shoulders against the February drizzle and let Bix babble on about how excited he was to go to SimCon. It was the first time their city had hosted the gaming convention, and the nerds and geeks were completely turbo.

"Can you believe VirtuMax is finally unveiling the FullD system?" Bix's voice rose with enthusiasm. "It's been years since they announced the project. I hope it's as prime as they claim."

Despite the nonchalance he projected, Aran was excited—though not for the same reasons. He was burning to see VirtuMax unveil their long-delayed FullD system and try the immersive new game that came with it: Feyland. If he could get a head-start on cracking the programming, he'd be set. Make enough cash to move someplace where the sun actually shone in the winter.

Maybe he'd buy one of those old-style camping vans, figure out a way to install his gaming systems, and travel around, following the warmth and the cons.

But first, he had a game to hack.

"Spark Jaxley will be at the debut." Bix grinned. "I hope we can get close enough to touch her."

Practically every gamer in the world was in love with the celebrity simmer—guys and girls alike. She was cute, sure, but Aran would bet that most people never realized—the way he, as a true hacker, did—that her gaming skills were flawless.

Which probably meant she was a class A diva.

"You can ask her out," Aran said as they headed down the dingy steps of the subway station. "Guy like you, how could she refuse?"

In the stink and whoosh of the tunnels, Bix passed his wrist, with its embedded chip, over the gate scanner. Aran dumped a handful of grubby coins into the machine. If Bix weren't with him, he would have jumped the gate, but he was playing it straight today. No thrill of eluding the security guys and dashing onto the train at the last second.

It was a quiet ride down to the convention center, though the train filled the closer they got. Half the passengers were dressed for a day at the office. The rest were obviously on their way to SimCon, flaunting their gamer garb and inner freaks. Aran concentrated on relaxing, sinking deeper into his character of regular-gamer-geek.

"Do you think the plan will work?" Bix asked as the train pulled into the downtown station.

They went along with the flow of people headed out of the station and toward the gleaming glass and steel complex housing the convention center. Once inside the main building, they were hit with the smell of industrial carpet and the babble of excited fans.

"Volunteers, over there." Bix pointed at the sign, then cut across the crowd.

Aran followed, rubbing his thumb over the chip glued on the inside of his wrist. As long as no one took a close look, he'd pass.

Bix fell back, fidgeting with the edge of his coat. They joined the queue at the volunteer check-in table, and Aran pushed his friend ahead. Best to let the genuine guy go first. The lady in front of them was wearing sparkly wings. She had to take them off and let the security guard on duty inspect them to prove they weren't wired as transmitters or something. Finally approved, she grabbed her badge with a loud snort of annoyance and stomped off, wings glittering.