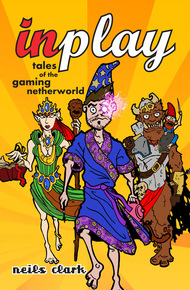 Neils Clark has taught game developers at the DigiPen Institute of Technology, and is co-author of the acclaimed book Game Addiction. He's spoken at conferences such as Meaningful Play, Games for Health, and PAX, on topics as diverse as ethics, game design, addiction, and the connection between videogames and art.

In Play: Tales Of The Gaming Netherworld by Neils Clark

Part-travelogue, part-analysis, In Play: Tales of the Gaming Netherworld uses gaming adventures to answer the question of why games matter. Clark uses high-bodycount Warcraft weddings, snappy academic critique, and the occasional devil to give clear, often hilarious explanations to what we're doing in games. Whether you want to know what's helping some players win staring contests with their screens, or why games just may be the state of the art for art, In Play is one of the most entertaining introductions out there.

Neils is already well known for his work around video game addiction, from both a scholarly and personal perspective. This full-length book, relatively overlooked on its debut earlier this year, is a series of vignettes that add up to a remarkably thought-provoking whole - and an 'addictive' one in its own right. – Simon Carless

At ten years old, one computer game – by virtue of how mesmerizingly it simulated space combat – captured me for an entire summer. Misadventures with homemade fireworks, learning the taste of honeysuckle, and a first stirring of crushes on girls, those memories feel pale next to the adventures I had aboard the spaceship carrier Tiger's Claw.

It was the summer of 1992, and you couldn't go anywhere without hearing U2's Mysterious Ways. You could go a lot of places without seeing a 486 computer. It didn't matter that one such miracle machine was in the spare bedroom. You want to tell a ten-year-old that the height of modern innovation is… Windows 3.1?

I'd stay snotty and unimpressed until my college-age cousin Darrell – who owned this cutting edge artifact of technology – showed off something else it could do. As I peered over the desk, he swept by Kilrathi fighters, cut through one with laser cannons, and merrily torpedoed their capital ships into space debris, all inside the 3-D space flight simulator Wing Commander. It was as though all that tinkering with homemade fireworks had finally blown off the top of my head. My cousin was a wizard.

My parents could not be troubled to obtain such an expensive and frivolous contraption. His investor parents, however, always needed the newest gadgets, the most technological toys, just as soon as they came out. When their last computer had needed replacing, it moved to my cousin. When he'd outgrown that one – to my utter exaltation – it moved to my dad's office, with its copy of Wing Commander. My cousin was a generous wizard.

Between stacks of paperwork, checkbooks, a half-dead radio (the volume cranked to max), and all the trappings of a well-stocked office, I was gone. I'd become the blue-haired pilot, scourge of Kilrathi ships, soaking it all in through the extravagantly large 13-inch VGA monitor.

Wing Commander wasn't like most of the games I'd played at friends' houses, say the various brands of Mario, or Duck Hunt. If you failed in those, you just lost, or died; you had to start over. In Wing Commander you certainly could fail. You could be vaporized in the cold of space, or eject, and get bitched out in debriefing. You could also fail nominally, little by little. Maybe some of your missions went well, but in others you didn't save quite enough people. You were almost good enough – but the Terrans, the humans – would start to lose the war. Every few missions the cinematic cutscenes, these pixilated bits of plot, would show human scientists getting murdered, and buildings – human buildings – collapsing in on themselves.

There was a reason to care. And that reason had as much to do with the story as with the game's system. Those last-ditch space dogfights? One missile left, shields obliterated, armor almost gone, trying to protect a commandeered Kilrathi cruiser with a thousand Terran marines aboard, all to the high-intensity guitar solos in U2's Mysterious Ways. The wingman's ship breaks to pieces as he ejects – but you can't stop now. This is as far as you've gotten with the cruiser intact. And when that last missile connects to the last Kilrathi heavy fighter – when the cutscene finally shows scientists anticipating the attack – and those human buildings you've seen fall so many times, when they stay standing? That's magic.

So here I was, ten years old, and already saving the galaxy. You might be able to watch Battlestar Galactica, start to care about the characters, get sucked into the plot. But when Wing Commander puts you in control? When the system put me into the cockpit? In all the other strange realities I'd touch via this clunky 486 (with four megabytes of RAM! And a 33 mega hertz processor!) between all the galaxy-saving, princess-saving, Reader Rabbiting, Where in the World is Carmen Sandiegoing, and Super Sleuthing, I remember looking over my shoulder, as daylight wound down.

When would everyone else: mother, father, sister, come tap me on the shoulder demanding their turn? Dad might occasionally kick me off, but he'd use this wizardly device for taxes. Not saving the galaxy. That didn't make any sense. This was a portal, a magic mirror, and it was right in front of their noses! What had everyone else done with their day?