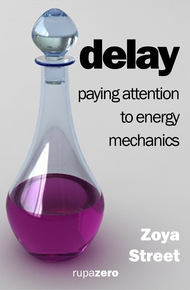 Why do so many casual games tell you to stop playing them?

If you've ever run out of lives in Candy Crush Saga or played a Zynga game, you've encountered an energy mechanic – you run out of a resource, and have to stop playing while it regenerates or pay money to continue.

In this short collection of essays, Zoya Street explores energy mechanics. Each essay weaves in a new idea, and then applies those ideas to key examples from social and mobile gaming, bringing together game design theory with queer theory, anthropology and a study of the recent history of social game design.

Despite the fact that social games are some of the most-played games today, there's been relatively little in-depth analysis of their game mechanics. Zoya's 'Delay' is a wonderful starting point for literature about the genre - a signature reference for the Candy Crush generation. – Simon Carless

Candy Crush Saga is engineered for addiction, but it won't let you play for long without seemingly turning you away. The game slams on the brakes and asks you to make a choice: pay money to keep trying to solve its addictive puzzles, or stop playing and come back later. You have used up a resource — 'lives' — that can only be replenished by waiting or by paying.

Around 70% of those who have reached the final stage of the game haven't spent any money. For most players, Candy Crush Saga is in part a waiting game. This limitation — known as an 'energy mechanic' — leaves many people feeling aggravated, irritated and even manipulated. It's common for people to make a comparison to drug dealers offering a first taste for free, and then charging money after chemical dependency has set in.

"The game has no shortage of critics in the traditional games world, who claim it's a cynical, manipulative cash-grabber of a product", wrote Stuart Dredge in The Guardian. "Candy Crush Saga's a sweet treat in some ways, but one with a disappointingly bitter aftertaste," concluded a review on Pocketgamer.

This is a story about moderation and excess. It is about fear and security, innocence and ecstasy, money and labour. It is about how we manage our base desires, and what happens when computers start managing them for us.

Different cultures respond well to different mechanics in free-to-play: for example, Americans hate it when players can pay money to gain an unambiguous advantage in a competitive game, but Chinese players accept it as a normal part of life. The success of games that employ energy mechanics in Europe and America could teach us something about our own societies. How does that success relate to broader cultural mores? And why is it so hated by gaming's design literati?

In a brilliant piece of satire about reviewing AAA titles, Leigh Alexander recently wrote that 'games are about feeling powerful, and you getting your way.' This moment of cutting sarcasm is there to reflect that games like Grand Theft Auto V exist within a culture of problematic masculinity, online abuse and consumerist entitlement. This is the culture that overwhelmingly defines what high-budget games are about, how they are made, and what they aspire towards.

What happens outside of the bubble of AAA gaming, if that violence and entitlement are less prominent? What if players don't assume that they can always get what they want? I will argue in this essay that a complicated tension between indulgence and restraint is at work in many casual games.