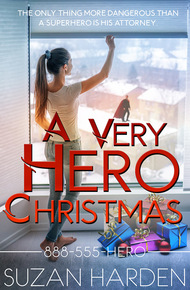 Suzan Harden transitioned from writing information technology manuals for companies and legal articles for a law enforcement magazine to her first love, fantasy and science fiction in all their forms. She's the author of the Bloodlines, the 888-555-HERO, and the Justice series.

Everyone at The Law Offices of Winters & Franklin is safe during the holidays. Or are they?

Aisha spends Christmas with her family in Atlanta, only to have a new supervillain take the mall patrons hostage while Aisha's doing some last minute shopping with her niece and nephew.

Meanwhile, Harri's attempts at making a perfect Christmas for her goddaughter get out of hand as the guest list keeps growing. Just one little problem—Harri can't cook.

Can Aisha save the citizens of Atlanta without revealing she's a super? Better yet, can anyone save Harri's guests from food poisoning?

Call The Law Offices of Winters & Franklin at 888-555-HERO where the only thing more dangerous than a superhero is his attorney.

In the baking goods aisle of the grocery store, Harri crouched and pulled a five-pound package of flour from the bottom shelf. She straightened and brushed white powder from the paper exterior. "Don't these come in smaller sizes?"

"Actually, you should go back and buy a couple of those delicious-looking premade pies." Jeremy propped his fists on his jeans-clad hips and flipped his longish front shock of blonde hair in the direction of the bakery section of the store.

"No." Harri set the flour in their shopping cart. "This is Grace's first Christmas, and it's going to be perfect."

"Sweetie, Gracikins isn't six-months-old yet." Jeremy shook his head. "She won't remember this. Hell, she can't eat most of what you're making."

Harri ignored him and checked her list. He may be one of her closest friends, but right now, he was being a Negative Nellie, and it was irritating the hell out of her. "I'd better get two bags just in case."

Jeremy slapped his forehead as she crouched and grabbed another package. "Harri, I love you, but you can barely boil water. Put this stuff back, and let's go back to the bakery and deli sections. I know the manager. He'll let us put in a last-minute order."

"No." She crossed flour off her list. "Now, where's the salt?" A sign that said "Seasonings" hovered over some shelves ahead of her cart. Salt was a seasoning, right?

"All of your guests are going to starve." Jeremy threw his hands in the air as Harri pushed the cart down the grocery store aisle. "You may be the best attorney in Canyon Pointe, heck, even the state, but you can't cook, Harriet Matilda Winters!"

He sounded exactly like her ex-husband Eddie. Worse, Jeremy had used the despised full name. She whirled and jammed her index finger into his breast bone.

"I am not going to serve Grace food cooked by maids or caterers like mine and Tim's families did. I am not going to serve anyone warmed up TV dinners like Arthur's parents did. And I'm sure as hell not serving her bread crusts and telling her to be grateful for it like Patty's grandmother did. Grace is getting the real Christmas she deserves!"

"Is there a problem, ma'am?" a voice rumbled behind her.

Harri pivoted and looked up at the huge man, who towered over Jeremy as well as her. His scarlet necktie and white dress shirt matched nicely with his Quinto's Grocery apron. However, his graying beard stood out against his dark skin.

She glanced around and realized she'd attracted a crowd.

"Is that the case, ma'am?" He didn't have a name tag, but from his stance, the man was probably the store manager. He was also probably worried about violence in his domain. Two idiots had gotten into a gun battle over a fashion doll's dream house at a local chain toy store last weekend at the Southside Mall.

Luckily, Harri's superhero client Cobblestone stopped the mothers before anybody had gotten hurt. Thank goodness, he was still at the store after his annual Christmas gift event for kids in the foster system.

She totally understood why Rey wanted to follow in Cobblestone's footprints, but battling Aisha over a new moniker for Rey was getting on her last nerve. She could literally feel her blood pressure rising, and she shut down that train of thought.

Harri took a calming breath and looked up at the manager. "I'm sorry for my outburst, sir. My brother was merely pointing out I'm being an obsessive butthead over our goddaughter's first Christmas."

"As long as you don't make any more of a ruckus." The manager's salt-and-pepper eyebrow rose, questioning her intentions.

"Happy Holidays, then, ma'am. Sir." He nodded to both her and Jeremy before he sauntered back towards the check-out lanes.

With the show over, everyone else resumed their shopping.

"I didn't realize how much the past holidays bothered you," Jeremy said softly as he followed her down the aisle. "Is that why you're trying so hard to be Betty?"

"Betty and Marvin gave us the closest thing we had to a real Christmas," Harri muttered. And Aisha's parents really had been the only ones who gave a shit when Harri and Jeremy had been teenagers. She swiped at her eyes. That damn flour dust was everywhere in here. "Anyway, she sent me a few of her recipes. It doesn't sound that hard."

"Aisha's mom was also up at three a.m. to start Christmas dinner." Jeremy grabbed a canister of salt and set it in the cart.

"That's because she didn't want any interference from Grams and Aunt Queenie." Harri consulted the list again. Cinnamon, nutmeg, and ginger were needed for the pies.

"They only flew into Canyon Pointe our junior year in high school," Jeremy stated.

Harri handed the cinnamon and ginger jars to him. "That's because the Franklin house in this city wasn't big enough with you and I living there. Now, where the hell is the nutmeg?"

"The spices are in alphabetical order, silly." Jeremy pointed at the bottom of the spice rack.

"Gotcha!" Harri tossed him the last jar of nutmeg.

"All right. Fine." He set the glass jar carefully into their cart. "You cook. Leo and I will bring the mulled wine and eggnog."

"It's a deal." She was going to make this the Christmas they all deserved even if it killed her.