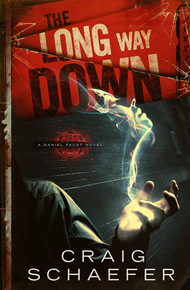 By the time he was four years old, Craig Schaefer knew he wanted to be a writer. He also wanted to be an astronaut, a private eye, and a fire truck, so nobody paid much attention. Other passions came and went with age, but the love of writing remained. He cut his teeth on the crime thrillers of Elmore Leonard and Richard Stark, which may explain a thing or two about the person he is today.

Exploring other genres he soon latched onto horror and weird fiction, falling hard for the worlds of Clive Barker and H.P. Lovecraft. Research for the Faust novels has led Craig down some curious alleys — sometimes literally — and to conversations with interesting and occasionally frightening people. His reference bookshelf, stocked with tomes covering the spectrum from criminology to demonology, has been variously described as "disturbing," "a bit eccentric," and "the reason I'm not dating that guy anymore."

When he's not behind the keyboard, he can be found visiting Chicago's historic museums, haunting libraries for inspiration, and spending too much time gaming while he should be writing. He also dabbles in sleight of hand, though unlike Daniel Faust, he's not very good at it.

The Long Way Down by Craig Schaeffer

Nobody knows the seedy underbelly of Las Vegas like Daniel Faust, a sorcerer for hire and ex-gangster who uses black magic and bullets to solve his clients' problems. When an old man comes seeking vengeance for his murdered granddaughter, what looks like a simple job quickly spirals out of control.

A man named Faust should know what happens when you rub shoulders with demons. Still Daniel can't resist being drawn to Caitlin's flame as they race to unlock the secret of the Etruscan Box, a relic that people all over town are dying — and killing — to get their hands on. As the bodies drop and the double-crosses pile up, Daniel will need every shred of his wits, courage and sheer ruthlessness just to survive.

Daniel Faust knew he was standing with one foot over the brink of hell. He's about to find out just how far he can fall.

I stumbled on Craig Schaeffer's debut novel The Long Way Down completely by accident and I've been telling everyone I can about it every since. Las Vegas sorcerer-for-hire Daniel Faust is an intriguing character (how can he not be with a name like that!) and Schaeffer pulls you in with this Marlowe-esque mystery that pulls from the best of urban fantasy and noir traditions. – Joseph Nassise

"I know what you are," the old man said. The tremor in his voice told me he wasn't so sure. He'd introduced himself as Jud, Jud Pankow from Minnesota. He was a long way from home.

We sat in a booth in the back of Tiki Pete's, a seedy diner four blocks east of the Vegas Strip. I doubted the place would survive a health inspection, but the grimy windows and the backwater street kept the tourist traffic at bay. Besides, I didn't come here for the food.

"Then you know I'm not a private investigator," I told him, "not a licensed one, anyway."

He gripped a coffee-stained manila folder in his thick farmer's hands and clenched his jaw. I sipped my mai tai.

"He killed my little girl, Mr. Faust. He murdered her and he threw her away like a piece of garbage. I don't need any private eye to tell me that."

"The police think otherwise. You want me to prove them wrong?"

"I don't care what anybody thinks," Jud said, "and nothing's going to bring my baby back, proof or no proof. I know that."

"So what do you want from me?"

His rheumy eyes flooded with a pain I couldn't imagine. The folder crinkled in his grip as he whispered just loud enough for me to hear, "I want him punished."

I should have sent him away. I didn't know why, but I felt like a roller coaster ratcheting its way up the first peak, inch by inch, heartbeats from a plunge into bad craziness at a hundred miles an hour. All my instincts screamed at me to drop this one and walk.

Looking at him, though, I didn't have the heart. He needed some hope. Hell, he just needed someone to give a damn.

"I don't make promises," I told him and watched his eyes light up.

He fumbled in his pocket and shoved an envelope into my hands. It was stuffed with green, all small bills, rumpled and faded. This wasn't fresh-from-the-bank money. It was the kind of cash that sits in a coffee tin in a kitchen cabinet for years, saved up for a rainy day.

"This," I said, tapping the envelope, "buys you a few days of my time. If I don't think I can help you, you get it back, minus my expenses. Now, is Stacy your…?"

"Granddaughter. Her pa, he was never in the picture, and her ma's got…she's got problems. Don't think she even noticed when Stacy ran away. I watched over the girl best I could. Even sent her money a few times after she left home, when I had an address to send it to. Then she took up with that…that bastard. She wrote to tell me she'd moved in with him, that he'd gotten her a job, a good-paying job…"

He slid the manila folder across the table. On top of the stack inside was a ragged newspaper clipping, torn from the Vegas Sun, and the stark headline told the story.

I didn't need to read the article. I'd already seen the story on TV. Even in the middle of the Mojave it rained a few days every year, and we were nestled in a natural basin. There was a network of storm tunnels and drains underneath the city to trap the occasional downpour and keep the water off the streets, which was great for everyone, except the indigents who holed up down there to escape the heat. Sometimes they managed to stumble out ahead of the rain, and sometimes maintenance crews had to fish out the bodies.

Next in the pile was an autopsy report from the Clark County coroner's office. No photo, just a few pages of medical jargon dense enough to make my eyes water. Cause of death was drowning, no surprise there, but I frowned when I read the bit under that.

"Time of death is difficult to estimate, but given the diminished signs of rigor mortis as well as the subject's skin condition, coroner estimates TOD sometime on 3/15."

"The rainstorm was on the seventeenth," I said, flipping back to double-check the date on the newspaper clipping.

I looked up at him. "She drowned two days before the storm."

"Either the doc was dead wrong, or there's a criminal case here. Why aren't the cops looking into this?"

"I wasn't even supposed to know." Jud stared at his hands. "They told me they could only give that report out to immediate next of kin. Granddad don't count. On my way out, a young fella pulled me aside and put that copy in my hands. Said I oughta read it real close. Well, I did, and I did some checking. Found out the case was referred to this Detective Holt, so I gave him a call."

"Whole lot of nothing. Told me they were working on it, but he's got eighty cases on his desk and yadda yadda. Made it clear my little girl was a lower priority than getting his dishes done."

Her letters home sat under the autopsy report. Longhand on loose-leaf paper, talking about life in the big city. She signed each one "Love, Stacy" and drew the v as a tiny heart. I glanced at the dates. The letters came farther and farther apart.

"She never said anything was wrong?"

"I'd have come out to get her myself," he said, his weathered hands clenching into fists, "if I'd only known what she was really doing, what he was making her do."

"Tell me about the guy."

I sipped my mai tai and shook my head.

"Problem there, Mr. Pankow, is you just took away his motive. If Stacy was making money for this guy, why would he kill her?"

"Have you seen the kinds of movies he makes?"

"You'd remember if you had. They aren't right, Mr. Faust. The things he does…he's not right."