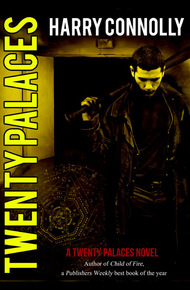 Harry Connolly spent two years writing his first novel, Child of Fire. He has held a variety of jobs in the past, from customer service to landscaping to stay-at-home dad. He lives in Seattle.

When Ray Lilly was 13 years old, a handgun accident landed his best friend, Jon Burrows, in a wheelchair and turned Ray into a runaway and petty criminal. Fifteen years later, Ray returns home after a stint in prison; he's determined to go straight, but he knows he can't do that without making peace with his old friend.

What Ray doesn't expect is that Jon has just received a mysterious cure–not only is he out of his wheelchair, he seems stronger and faster than… well, pretty much anyone. Worse, his cure has drawn the attention of all sorts of powerful people: the media are camped out on his block, the police are investigating him for insurance fraud, and weird shadowy figures have begun to draw closer, figures who clearly do not mean to do Jon any good.

Can Ray atone for the biggest mistake of his life by protecting his oldest friend? And what terrible price will the world have to pay if he succeeds?

Harry Connolly introduced the character of Ray Lilly – ex –car thief and small time sorcerer with exactly one spell to his name – in 2009's Child of Fire and I'm so glad he did. I've enjoyed all the Ray Lilly novels to date and immediately thought of the Twenty Palaces series when I was asked to put together a dark fantasy bundle. Twenty Palaces kicks off that fabulous series and I'm sure you'll enjoy it as much as I did. – Joseph Nassise

"Good," he said. "Tell us about the interview."

"Jon Burrows was there." I hadn't meant to say it, but it came out anyway. My aunt and uncle looked at each other, and I knew they weren't surprised at all. "How long ago did he...?"

It was Uncle Karl who answered. "Sometime within the last few days. Did he say how it happened?"

The way he asked the question made me wary. I'd spent the last few years refusing to answer cops' questions, but what the hell, I was starting a new life. "He said it was a miracle, but I think he was full of... I think he was lying."

"Why do you think that?"

"His expression. His tone. The woman asking the question was fiddling with a cross at the time—I think he was saying what she wanted to hear."

Karl nodded. He took a dishtowel off the end of the table, revealing a newspaper. He passed it to me. The headline read "Miracle or Hoax?" and just below it were two pictures: One showing Jon in a wheelchair, his slack face partly covered by his long hair, and the other showing him standing in his yard, laughing. It was dated yesterday.