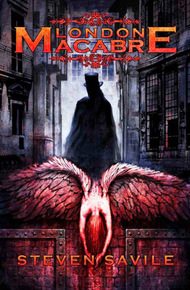 From the UK's #1 bestselling author of Dr. Who, Primeval, and Torchwood comes an occult thriller featuring murder and supernatural mayhem on the streets of old London...

Strange and frightening things are afoot in the City. The lions of Trafalgar have climbed down from the plinths surrounding Lord Nelson's column to assume the defense of the city, fulfilling an ancient prophecy, while a sinister presence, also free after centuries of imprisonment, now stalks tender prey through the gas-lit streets and meat markets of the Whitechapel District. The women this fiend targets are far different from the whores being brutally murdered by a man named Jack, for these woman may look like flower girls but they have the blood of angels running through their veins...

Standing between these two forces are the Greyfriars, determined to face off against these infernal foes with nothing but their wits and a touch of old school magick. Success means the rescue of innocent blood and the gentle hearts through which it beats, but the price of failure is too horrible to contemplate...

Join Dorian Caruthers and the stalwart men of the Greyfriars as they journey through the dark city's dark underbelly to the very edge of the Catamine Stair in an effort to keep the devil and his minions from claiming London as their own.

I've known Steven for more than a decade and have always been fascinated by the characters and worlds he creates. Steve's fiction drips with an uncanny sense of realism, even when he is writing about the most fantastical things. The Greyfriars of London Macabre are no different – if you passed them on the street, you wouldn't know it, but you'd be damned happy they were there when things went sideways. – Joseph Nassise

The woman might have been beautiful, once. It was impossible to tell because the flickering blue blush of the gaslight cast a pall of sickness across her face. The harsh light picked out the shadows of her pocked skin, flaunting her imperfections. Whatever she might have been, she was not beautiful now.

She carried a basket of wilting flowers. The wet stems nestled against the pearly ruffles of her blouse leaving a grimy circle of damp beneath the swell of her left breast.

The man who called himself Nathaniel Seth smiled at her pantomime of propriety as she adjusted the lie of her bustle on her generous hips and teased the set of her porter's knot. It was all a show, an elaborate charade to mask the fact that she was loitering on the corner of Bedford Square.

A prostitute by any other name.

Where other girls made for the warmth of the palatial Alhambra down in Leicester Square or the dancing rooms of the East End where the music of desire filled the snuggeries and lust parted the amorous from their shillings, this one waited out the night on a dimly lit corner, clinging to the dark places she knew well.

She listened hungrily to the sounds of the night, the clatter of horses' hooves sparking on distant cobbles, the cries of the street hawkers and below them, the soft feet of the young cadgers running back to their nests to share whatever spoils their light fingers had plucked.

He cursed his luck, willing her silently to move on, find another perch or slip into a Hansom Cab and disappear into the cloying smog.

He could smell her perfumes, wantonly applied to douse the reek of those other wanton fragrances that clung to her ample flesh. It was cloyingly sweet.

At that moment the world had such small horizons: it spanned from the mouth of the Square to the shadowy steps of the British Museum. He opened his hand, stretching the stiffness out of his fingers. His pocket watch ticked against his breastbone. He counted the movements, inhaling and exhaling shallowly with every third one, twenty breaths in a full minute of watching the woman.

She was, he thought, looking for someone. An expected rendezvous, perhaps? A pre-arranged tryst? Or business? He listened intently for another set of footsteps, the slow measured confidence of a tallyman come to collect her bawd's cut of the night's take.

He cracked his knuckles one at a time and stepped out of the sheltering obscurity of the hanging gardens, pushing back the tears of a weeping willow. The melancholy leaves fell across his face, leaving smears of pollen on his lapel like poisonous kisses. The metal tip of his cane marked each step precisely as he crossed the cobbles toward the waiting woman, the harsh sound hanging in the air.

Halfway across the square he heard the first chime of midnight from St. Giles' church. It was taken up a moment later by the great bells of St. Pancras and St. Luke's, and before the first chime had stopped resonating, by The Holy Trinity out by Lincoln's Fields. The chimes were like a ripple of sound spreading out across the city. He paused for a moment, to listen to them. They were not an unpleasant last thing to hear . . .

He smiled warmly, imagining himself in her eyes: tall, debonair, a dashing city gent both educated and cultured and a long way from his element, walking a lonely road at night, a fool in other words, waiting to be parted from his money. The tails of his Churchill topcoat swirled around his ankles like a clutch of yapping terriers. The cut of his suit was expensive, the threads exquisite, imported from the Far East. Seeing her half-turn, half-smile, he inclined his head and tapped the silver wolf's head of his cane to the brim of his silk plush Waverley and returned her smile.

He decided then that he would be merciful. It was curious how a simple thing like her smile could buy even that small relief from him. On another night, he knew, that same smile could just as easily have been reason enough for him to choke the life out of her with her own sex-stinking garter. But tonight it saved her pain.

She made to offer one of the rather dejected looking blooms from her basket, but a wry smile and a slight shake of the head stayed her hand.

The light was indeed deceptive. Up close, stripped of the mask of shadows and the blush of youth betrayed itself. She could not have been more than eighteen or nineteen but already the curse of old London town had stripped away so much of her life. He could not give back her youth but he could bring an end to the relentless slide into decay her flesh was on. He had heard it said that eight years was the best a flower girl could hope to last on the streets. That was a sorry state of affairs. As the looks began to slide so the coin would dry up. Desperation would see to the rest. It was a devil's deal if ever there were one.

She curtseyed, lowering her eyes at his intent inspection, the blush in her cheeks was a lie painted on inexpertly with a thick cake of makeup.

In the distance came a sad wailing strand of music, whisper-thin on the chill air. It reminded him of the life all around, and the countless eyes that could by chance glance the wrong way as he did for the flower girl.

"It's a cold night to be out alone, my dear," he said, sketching a slight bow.

She had bad teeth, he saw, as she smiled. They had been whitened with some kind of paste but the underlying decay was barely hidden.

"Good fortune that I am not alone then, is it not?" Her smile was playful, but the cracked and broken teeth rendered it charmless. He could not imagine lying with the woman. "Can I interest you in a flower for your lady?"

He leaned in close, as though drinking in the juniper, anise, and other more potent scents that prickled his sinuses, and inclined his head meeting her gaze at eye level.

Her eyes were empty of anything approaching emotion. This was all theatre, the flower girl a player and he her hapless foil.

"I have pledged my life to a higher purpose, my dear. The seven sins of this great city are of no interest to me," he reached around, almost affectionately resting a hand on her shoulder and leaned in conspiratorially. The flickering dance of the gaslight and its shadows took his broad smile and leavened it, widened it, stretching it across the entirety of his face until it was both artificial and gruesome. "I cannot stand the stench, the ceaseless grunting and groaning, and worse, come close my dear, for this confession I dare only whisper."

She leaned in, pressing her ear to his lips.

He wondered for the silence between heartbeats if she could feel his false smile, so close was her skin to his, and then with a tenderness approaching sadness he whispered, "It didn't have to be like this," as he tangled his fingers in her hair, working them deep beneath the knot. With a single savage motion he twisted the bones of her neck until they cracked.

She convulsed against him, a scream stillborn on her lips. It was a pitiful sound. It didn't matter, there was no one to hear.

He forced her neck back further, until it snapped. Her legs kicked out weakly, the heel of her laced boot breaking off on the edge of a cobblestone. And in that long moment he watched her eyes, looking for the instant when, the nerves shorn, spine broken, the light that was the flower girl was snuffed out. She sagged against him, her eyes like glass. There was genuine regret in his voice as he said, "All you had to do was walk away."

He stepped back, letting her fall. The basket tumbled out of her arms and rolled across the cobbles leaving her flowers strewn across the street.