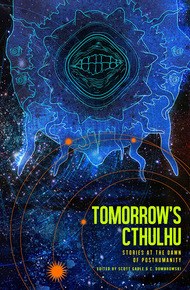 This is the dawn of posthumanity.Some things can't be unlearned.

Gleaming labs whir with the hum of servers as scientists unravel the secrets of the universe. But as we peel away mysteries, the universe glances back at us. Even now, terrors rise from the Mariana Trench and drift down from the stars. Scientists are disappearing—or worse. Experiments take on minds of their own.Some fight back against the unknown, some give in, some are destroyed, and still others are becoming… more.

The human and inhuman are harder and harder to distinguish. Mankind is changing, whether it wants to or not, with brand new ways of thinking.What havoc is wreaked by those humans trying to harness and control their discoveries? As big science progresses and the very fundamentals of this universe are understood, what stories are being hushed up?

Of course, the Old Ones laugh at our laws, scientific and otherwise.

These are transhumanist near-future science fiction tales of the Cthulhu Mythos.These are tales of more than merely cosmic dread. They exist in our world of the next couple years. This is the era of big science and—what is that? We'll be right back.

The short story is central to both weird fiction and science fiction, which is no surprise as weird fiction is a subgenre of SF as much as it is of horror. This collection of tales explore the post-Lovecraftian future and post-Lovecraftian literature in exciting ways, from the darkly comic "The Stricken" by Molly Tanzer, to Jeff C. Carter's rock-ribbed military SF/horror "Boots on the Ground." All killer, no filler! – Nick Mamatas

"The Stricken" by Molly Tanzer

The rain-puddled, mist-shrouded streets of Arkham are empty—emptier even than the sullen graveyard Hannah now calls home.

Home. It used to just be camp, but she has been squatting in this mausoleum for close to a week now and has no immediate intention of leaving. In spite of what it is, the stone room has taken on an almost cozy appearance. Her few possessions—a cookpot, spoon, some food, matches and dry firewood, a blanket, a few changes of clothes, her bike, a fire axe with a brown-stained handle, and a sturdy burlap sack with a large jar in it—are strewn about the place just like they used to be when her apartment was home. When she slept on a futon instead of with her back against a shattered coffin.

To be fair, the sack with the jar hadn't been there—but if it had been, it likely would have been tossed into the corner. Funny, the things that never really change. She's still a slob, even now.

It's a shitty evening, that's for fucking sure, but Hannah is barely damp and almost warm from the small, unpleasantly smoky fire she has risked building. Steady rain drums on the roof and patters on the unmown grass and disturbed headstones beyond the doors of the crypt, and the soggy branches of the trees rattle in the intermittent gusts of wind. She is keenly aware that the orange glow might attract unwanted attention, but she has made her choice. She needs the fire. She is certain she will die of exposure or misery without it—and she does not believe those who would injure her will seek her in this place.

When it all began, it would not have occurred to her that a graveyard would be the safest place to hide from the dead, but they seem willing to go everywhere but here. Her sanctuary was empty with the doors broken open from the inside when she sought refuge here on the solid advice of the only person she has spoken to in a very, very long time.

Hannah sighs and pokes at her fire with a wet stick. The bark peels away under her palm. She knows she should make herself something to eat, but she has not been honestly hungry for a long time. Her clothes fit a little looser, and she knows it's not just from all the dirt and grime and wear. It occurs to her that when her mother died, her father stopped making real meals for himself; he would just throw together sandwiches or pour himself some cereal and soymilk to eat it in the lab. When she'd chided him, worried about his health, he'd looked her in the eye and shrugged.

"Cooking for one is a fucking drag," he'd said before turning back to his work.

Hannah frowns at the memory, but it is not the remembrance of her father's attitude that upsets her. It is the recollection that she had once, and not too long ago, felt the need to worry for someone's future health.

She gets up to go measure out a few handfuls of lentils and rice from the bags she snatched from the bulk bins at Horn of Plenty, the little hippie market that once served Miskatonic University students and professors. That's when she catches sight of a ragged figure lurching across the intersection of Lich and Parsonage. Her stomach rolls over on itself, and she decides she doesn't actually want any food right now.

Watching the horror shamble on whatever unfathomable errand, Hannah just about jumps out of her skin when a rattle, like a bottle rolling over concrete, disturbs her melancholy peace. Quickly realizing the source, she groans, resigned to seeing what he wants. He's prone to drying out, so likely, he needs her to wipe him down with a damp rag. Or maybe he's bored and wants to talk. Neither prospect thrills her, not particularly . . . but then again, it has been several hours since she's spoken a single word. Some conversation might be nice.

The jar has fallen over, so she rights it before opening the lid and reaching inside to withdraw a living, severed head crowned with a mop of filthy grey hair. He blinks at her through thick, old-fashioned spectacles, sour-mouthed, as she sets him carefully on the inverted lid.

"I have asked you on more than one occasion to call me Dr. West," he says primly—very primly, considering what and where he is.

The tomb isn't much warmer for his coldness, but Hannah smiles anyway until her lip cracks. Then, she sobers. "Doctor West," she says, overemphasizing the syllables as she daubs at her lip with the back of her hand. "Can I get you anything?