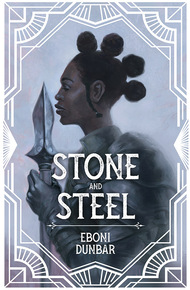 Eboni J Dunbar (She/her) is a queer, black woman who writes queer and black speculative fiction. She lives in the San Francisco Bay Area with her partner. She received her BA from Macalester College in English and her MFA in Creative Writing from Mills College. She is a VONA Alum, and the managing editor for FIYAH Literary Magazine. Eboni's work can be found in Stellium Literary Magazine, FIYAH Literary Magazine, Drabblecast, Anathema: Spec from the margins and Nightlight Podcast. Her novella Stone and Steel is out now from Neon Hemlock. She can be found on Twitter: @sugoionna87 and IG: ej_beezington.

Stone and Steel by Eboni Dunbar

In Stone and Steel, when General Aaliyah returns triumphant to the city of Titus, she expects to find the people prospering under the rule of her Queen, the stone mage Odessa. Instead, she finds a troubling imbalance in both the citizens' wellbeing and Odessa's rule. Aaliyah must rely on all of her allies, old and new, to do right by the city that made her.

Aaliyah's army stood on the precipice of home. Soldiers and mages in nearly equal numbers, all of them trained to bring glory to the kingdom of Titus. To Odessa. They were tired, they were hungry, and many of them were injured. They had gathered just around the mountain bend, before they could glimpse the capital city. While they awaited, the river captivated them, the bright blue of the blessed waters amid the green trees, like thousands of emerald clad warriors themselves, as they waited for their general to tell them they could finally go home.

When the ground shifted beneath their feet, making some of the horses jump nervously, General Aaliyah knew that her runner had reached the city. Aaliyah closed her eyes, imagining the way the wall of rock would disappear into the ground, the power it would take to do it. It took great magical strength, tens of her stone mages, but still they made it look so easy. And it was the sign that General Aaliyah had been waiting for.

"Let's get this shit over with," Aaliyah muttered to herself, stretching. Her body still ached from the final battle in the southern isles, and three weeks of riding hadn't helped. She shouldered her spear and prayed for a moment of peace so she could rest her weary body. "Let's get moving, people."

The air mage at her side nodded, lifting her hands and sending the message down the line. The golden symbol for air, three straight lines across her chest, glistened in the evening light as the white arms of her tunic ruffled in the wind.

Aaliyah could hear the crowd even before they passed the sheared stone mountain that led into the capital. With the walls down, all of Titus waited for them, thousands of people, hundreds of thousands if she was honest with herself. Cheering. For her. Her stomach roiled even as she sat up straighter on Hassim, her beautiful horse. She pulled her spear tight to her chest and wished that they had taken more time on the road, enjoyed the slow journey back.

It wasn't that she didn't want to be home. She wanted her warm bed and her warmer woman. She wanted her people, and the people of the army she led, to have whatever or whoever they wanted as well. But she hated the fanfare her sister insisted upon—Odessa was all drama.

They took the curve and the smiling, yelling faces of the capital came into view. Despite the masses, she was grateful to finally glimpse the domes and obsidian spires of the palace Lockheart. As children, she and Odessa had always thought of it as their temple and now she called it home. She still couldn't stop the butterflies from dancing in her chest at the sight of it.

To Aaliyah's left, Sherrod, her third, was already smiling. He loved this part, and she was grateful that he did because someone should. Sherrod had spent much of their last down time re-pressing his hair, trying to tame his naturally soft curls to something even softer. He'd let one of his lovers dye it red a few days earlier, and Aaliyah had to admit the color suited his light brown skin. He ran a hand through his hair once more and Aaliyah rolled her eyes.

She looked to her right and caught Helima's eye. The other woman rolled her eyes but the rest of her face remained blank. Aaliyah could count on her second to agree that all this parading around was stupid. Helima's locs needed some attention but it would never have occurred to her to make sure they were done for this parade. Aaliyah cleared her throat and mimed a smile. The younger woman let her face relax into something just passable enough to be a smile.

Aaliyah sighed and returned her gaze to the people. She might not be happy to be on display but she was certainly happy to see them.The black and brown faces of the people of Titus blurred together for her as she did her best to smile and wave at them. The sound of her name on their lips was deafening. She tried to make eye contact with a few people as they went but found that nearly everyone lowered their gaze. It hadn't been that way two years ago, when she'd left to conquer the last of the southern realms for Odessa. She had seen their confidence in her, in the pledge that Odessa had made, and which Aaliyah had carried out. It troubled her, but maybe she wasn't the only one who didn't like the fanfare.

"Mistress Aaliyah! Mistress Aaliyah!" A chorus of tiny voices made Aaliyah stop her horse in front of four children along the edge of the crowd. Hassim went still as she balanced her spear and climbed down.

"General," Helima called out, but Aaliyah waved her away. "Don't come talking to me when your sister has you by the balls for being late."

The children's awed expressions made her smile. They stared at her black ceremonial armor, made of finely woven leather and coated in obsidian for strength and beauty. It shone in the afternoon light. Aaliyah could remember being their age and seeing the old king's guard wearing it, thinking how beautiful it was. How wonderful it would be to wear it.

Odessa had always been more interested in the crown.

"Wassup?" Aaliyah said, dropping down to her knees.

"You got food?" The littlest one asked, a boy no one more than four. His nappy curls looked uncombed and unwashed enough that Aaliyah surveyed the other three. Too thin. Their clothes threadbare.

She remembered that too.

Aaliyah stood up and turned back to Hassim. She gathered what remained of her rations from her case, then went to Sherrod and took his. Helima had already climbed down and carried hers over to the children. Together, they handed off the food, the kids' faces lit up like fire in the night. The littlest one hugged Aaliyah round the knees. She closed her eyes but she couldn't stop the tears from welling. She'd been a child who was this hungry, praying for someone to be kind.

Odessa had promised to be kind to the people of Titus when she became Queen.

Aaliyah mounted Hassim and waited patiently for Helima to climb back on her own mount. It took all of her strength to remain calm while she was seething. Odessa had better have answers for why there were hungry children on their streets.