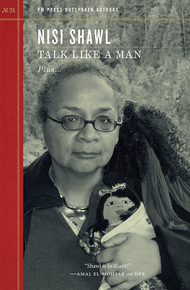 Nisi Shawl is an African American writer, editor, and journalist. They are best known for their science fiction and fantasy stories and novels dealing with race, gender, and sexual orientation. They live in Seattle, where they also write on political and cultural matters for the Seattle Times. Even before Shawl's steampunk-flavored alternate history of the "Belgian" Congo, Everfair, took the sci-fi world by storm, their short stories had already established them as a cutting-edge black writer whose politically charged fiction is in the grand feminist tradition of Ursula Le Guin, Octavia Butler, and Joanna Russ.

Nisi Shawl'ssteampunk-flavored alternate history of the "Belgian" Congo, Everfair, has taken the science fiction and fantasy world by storm. No surprise there. Their swift, sure, and savvy short stories had already established them as a cutting-edge Afrofuturist icon whose politically charged fiction is in the grand feminist tradition of Ursula K. Le Guin, Octavia Butler, and Suzy McKee Charnas.

In these previously uncollected stories, Shawl explores the unexpected possibilities and perils opened up by SF&F's new intersectionality. In Shawl's side-slippery world, sex can be both commerce and worship, complete with ancient rites, altars, and ointments ("Women of the Doll"); a virtual reality high school is a proving ground for girlpacks and their unfortunate adversaries ("Walk like a Man"); and a British rock singer finds an image in a mirror that reflects both future hits and ancient horrors ("Something More"). Also included is a presentation at a southern university, in which they patiently (and gleefully) deconstructs the academic and arcane intersections between ancient rites and modern tech. Ifa, anyone?

Plus: Our Outspoken Interview with Shawl, in which unapologetics are proffered, riddles are unraveled, and icons are, as always, clasted.

Nisi Shawl's entry to the Outspoken Authors series, collects stories, a lecture, and interview that show not only the connections between the real and the imagined but the intricate web of dynamics that have influenced their work. A great collection of stories and a closer look at the author. – Tenea D. Johnson

Shahday tugged and smoothed her blonde ponytail and said to me, "I'm thinking of starting a girlpack." She said it out loud, be- cause this was in Social Studies at Riverdale. She had to be there in her meat along with everyone else. The idea was to prevent us from forgetting something important if we never did anything but teleprez.

Of course I paid attention. This was Shahday Brooke, one of the toppest of the top; the units were impressed she went to Riverdale, and whatever they say, I think that's why they enrolled me in that particular replica. They can be smart. Back when people like us were called black they had to be.

Took me a long time into the season till I scored a seat next to Shahday, trading favors like braiding hair and making bracelets for kids in my way. Hard work, but I wound up in the genuine wood- and-metal desk to Shahday's immediate right.

I have an I. Is this less? Was we more? In a body. The many of us did this to become one me. The me is to become bigger.

Instant clothing; to see, I must look. The us left behind will only make a mirror if I ask. In words. I do.

Reflecting in it to better realize. Face am I. And hands with reaching. Touching. The flesh. The fabric hot, fresh; scent of it filling the small room.

"Who's your girlpack gonna belong to?" That was the best question I could come up with in response to what Shahday told me. Obvious. Stupid. I looked away, around the replica's room, the five rows of desks and chairs with other kids in them, the whiteboard at the front, the teacher writing on it in smelly red ink. A diagram of nothing I could use.

Shahday didn't bother answering, just turned toward her friend Lundun and said something low I couldn't quite hear. They laughed. Then they looked at me to be sure I knew who they were laughing at.

"Something interesting?" said the teacher. I think her name was Mrs. Schroeder. No sig in the meat, of course. "Would you care to share it with the whole class?"

The teacher froze up like a DOS attack. She was in the meat, not on, same as everybody in the replica, because that's the whole point of Riverdale. But I swear she looked exactly like she'd glitched.

Her eyes freed up and she blinked. Next came her hands, curl- ing under her throat as if they weren't sure whether or not to grab each other. Her mouth opened and she ordered all three of us into detention.

"Fine," said Shahday. So I wasn't going to argue, even though I hadn't done too much really wrong. I went to detention with her and Lundun when the bell rang instead of out of the building home.

Words are loud now—loud as remembering. How to look for the widest way; how to be the most big. We gave me a plan. No better than to follow it. Find the god. In the grove.

Riverdale's detention is in its own separate room. Why, nobody's ever told me. It runs after the regular school session. No detention during Social Studies, Gym, or Makering; they could have used any of those rooms. I guess maybe they didn't because this other space was already there.

We had to walk down the building's hall to get to it. The hall is a long, narrow place with huge glass windows on either side, slanting down a little hill. I went slow. Gave me time to think.

Lundun reached the door before Shahday and opened it. I came in after them, while the lights were still turning on. No windows. Blank walls, bare tables, plastic chairs. Nothing and nobody else. Detention was supposed to be boring, even more boring than the rest of the replica. Punishment. The exact opposite of getting on.

How I move forward is to walk. Which is like falling. Giving in to grav- ity. Balance and let go. No fright belongs with this experience because it is a major subroutine and I am assigned enough processor. And priority without request. Previously determined I would need this.

Shahday and Lundun slammed down across from each other at the table furthest from the door. From me. I made believe that was hunky dory and concentrated on undoing the flap of my expensive purse while sitting at the same table, other end. Like I didn't notice what I was doing. Pulled out a bag of chuck and gulped a slug.

That got their attention.