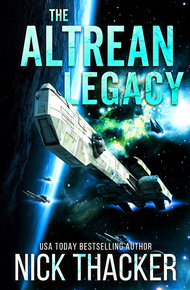 Nick Thacker is a thriller author from Texas who lives in Hawaii and Colorado. In his free time, he enjoys reading in a hammock on the beach, skiing, drinking whiskey, and hanging out with his beautiful wife, two dogs, and two daughters. For more information and a list of Nick's other work, visit Nick online: www.nickthacker.com

The Altrean Legacy by Nick Thacker

The Altrean Origins Project exists to bring strange and dangerous alien life forms back to their home world for study and examination.

When a malfunction leaves their crew locked inside the alien arcology, they must figure out a way to get out.

And not all the species inside the arcology are friendly...

The look on the man's face told her everything she needed to know. His eyebrows were creased in a dark, brooding sort of way, and his eyes were glassy. Aware, yet distant all at once, as if he'd just been given a death sentence.

And a death sentence, at least for their research funding, might be exactly what they would receive upon their arrival back home.

"What?" she asked him. "You were in the meeting, and you heard the results."

"The results?" He shot back. "The results were almost unanimous. Except for a few of those dreadfully incompetent volunteers, we decided this was far too risky."

"Those 'incompetent' volunteers are the reason we're allowed out here in the first place," Isa said. She knew she had stretched the truth a little, but she was content with her response. She also knew Mercer couldn't disagree.

His jaw tensed, then relaxed, an ongoing cycle of teeth-clenching and unclenching that told Isa everything she needed to know.

He knows I'm right, but he still doesn't like it.

"I still don't like it," Mercer said. His voice had dropped now to a conversational level.

She nodded. "I don't either, Mercer. You of all people should know that. How long have we been doing this?"

The question was meant as rhetorical, but Mercer seemed to be searching for an answer. "In local years?"

"Twenty years since I signed on. Same as you."

A thousand years, at least, on their home world.

"Twenty years. And during those twenty years, how often have I been inclined to do something rash?"

Isa let her shoulders slump, and her voice lost its edge. "Mercer, I do believe there's scientific value here. We all do."

She turned to the wall panel next to her and spoke a command. A voice echoed in response through speakers hidden in the walls and ceiling of the massive hallway. "Janu is currently in his quarters. Would you like me to alert him?" Mercer raised an eyebrow.

"No, thank you." Isa turned back to Mercer. "You should discuss this with him. He'll be at dinner, but I'd suggest bringing it up after, when you can catch him alone. You don't want a repeat of this morning."

Mercer nodded, then turned abruptly and began walking toward his room. Isa watched him for a moment, the broad-shouldered man receding around the slight bend in the hallway.

The hallway, stretching around the massive arc at the center of the ship, housed everything from the crew and scientists' quarters to the research labs, medical facilities, and engineering and maintenance rooms. It was a giant circle, joining itself back at the front of the vessel at the bridge and main flight deck.

Rax and Galene would be there now, prepping the ship for its return voyage and setting the proper coordinates. Much of the flight was completely automated, thanks to the centralized intelligence of the ship's computer. Takeoff, flight prep, and landing, however, were usually considered good times to "check in" on control status, systems, and any troubleshooting needs the computer would display.

Isa walked toward the flight deck, opposite the direction of Mercer's room. Her room was adjacent to Janu's, one of the perks of being second-in-command. The rooms shared a floor plan, and each was twice the size of the other quarters. All the rooms on the ship were equally well-appointed, providing their inhabitants with a full suite of entertainment, medical, and research tools for individual needs. They were comfortable, luxurious, and connected into the standardized communications array the ship used.

It was always surprising to Isa how little time they all spent in their rooms. They were certainly communal creatures, evidenced by the fact that almost all research was conducted in the multipurpose labs, meals were consumed in the dining areas, and the preferred style of recreation among the team was an intellectual team game of some sort.

Isa and Janu were different, though. She'd known Janu longer than she'd known the rest of their small team, and his reputation for being a reclusive genius was not altogether untrue. He was much kinder than she'd originally expected, and he wasn't one to shy away from interaction, but she felt he was happiest alone in his room, his own thoughts and the computer's AI his only companionship.

Isa too was far more individualistic than her counterparts. Their Altrean society was massively social, grown over thousands of years to be networked, organized, and people centric. Interstellar exploration wasn't a very crowded line of work, and she found herself amid fewer and fewer crew members and scientists with every departure.

She reached her room and the door immediately slid open, aware of her presence. The lights faded on, gently aligning themselves to her programmed preferences for this time of the day.

The computer spoke with the same soft voice they were all familiar with. "Isa, would you like a preview of tonight's scheduled activities?"

She shook her head.

The computer read the movement and processed her nonverbal cues. The lights dimmed slightly, and the wall at the corner of the room swiveled inward and revealed her casual wardrobe.

The small closet featured only two options: a casual, two-piece outfit of a single gray color, and the field-ready version she was wearing now, with a hardened exterior and light, stretched fabric bottoms. This set was the clothing choice the crew wore most of the time, as it was more versatile for the myriad of tasks a scientist or engineer would need to perform during their working hours.

Isa stripped out of the fieldsuit and dressed in one of the casual sets. She placed the dirty clothes at the bottom of the wardrobe on a bench-like section that would recede into the wall, clean the uniform, and hang it to be worn again.

When she finished, she sat down on the bed in the center of the room.

"I am sensing unusual levels of stress," the computer said. "A combination of 37 local minutes of REM sleep and three units of Beramin should be enough to —"

Isa waved her hand left to right across her chest and the computer immediately stopped.

"Thank you, but I'm fine," she said. As someone who usually preferred solitude, it was always surprising to Isa when she felt herself longing for someone to talk with. It might be her nature to seek solace, but it was her species' nature to seek camaraderie. This internal struggle was one she'd considered her entire life — what were the peculiar genetics that allowed an organism the complexity to battle with itself? To allow one to feel loneliness even in the midst of knowing that being alone was what made it truly happy?

The gene sequences that governed her own unique character began to spill into her mind. She'd memorized the general traits that differentiated her from everyone else long ago, a sort of homage to her passion for genetics.

But quickly the comforting, itemized data turned into a barrage of unwarranted, unexpected emotion.

The confrontation with Mercer, Janu's quiet retreat to his room, the reaction from the volunteers, all of it. Isa had her own feelings on the matter, but it wasn't her place to inject her own opinion into the mix. They looked to her for…

Janu was the team lead and the one most capable of making decisions. But even he turned to her, his second-in-command, for the difficult decisions.

But did she trust herself?