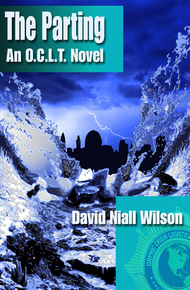 The Parting by David Niall Wilson

A vision from ancient Egypt and a call from an old acquaintance send Rebecca York, mystic, occult expert, and adventurer to Arizona, and then Jerusalem and the Dead Sea to prevent a horrifying attack from the annals of history. Rebecca and computer expert Wendell "Mack" Macklemore team up with a renegade Vatican monk, a street urchin from Jerusalem, and an agent of the Mossad to oppose Amunet, an Egyptian sorceress, as she comes ever closer to exacting an ancient revenge and unleashing a terrorist attack that could plunge the Middle East into an era of darkness. This is the first full length novel of the O.C.L.T. - the Orphic Crisis Logistical Taskforce. The events of this novel predate the actual formation of the O.C.L.T., joining with the novellas "Brought to Light" by Aaron Rosenberg, and "The Temple of Camazotz," by David Niall Wilson. Each of these works introduces another facet of team, which is formally introduced in the novel Incursion by Aaron Rosenberg.

Rebecca York was a woman of ritual. Her father had taught her at a very early age to treat every moment of every day with the significance of a final ending, and a great rebirth. To do less was disrespectful to the powers that created the heavens and the Earth. The end of her day was no less to her than the beginning, and in some ways, far more important.

She had expanded on her father's wisdom over the years, caring for her mind and body with equal parts of her attention. At 5'9" she was taller than most women. She was slender, which accentuated her height, and wore her hair in one long braid, normally draped forward over one shoulder. She kept to herself – evident in her choice of homes – and her clothing was usually dark and plain with only a few meaningful ornaments to set off the glitter of her eyes.

You would not know from looking at her that she'd traveled the world, or suspect the mystery that had surrounded her life from a very early age. If you didn't know her, you would not suspect the power she was intimate with, or the iron will with which she controlled it. Not unless you met her gaze full on. That was an experience none could ever forget. Rebecca York might appear unassuming, but that appearance was the epitome of the old adage about books and their covers. And despite her best efforts to hide it, she was beautiful.

Her cottage was tucked in among rolling foothills of the Great Smoky Mountains, just west of Asheville, North Carolina. There was a road leading in, but it was closed off by a series of gates she locked carefully each time she drove in. She had other ways out; but they were not shared with the world at large. As far as anyone was concerned, she was the crazy lady who lived in the woods, and that was fine by her. Those who knew her often kidded her about her lack of a social life, and her affinity for seclusion, but she only smiled and ignored them. Born in Israel, she'd lived in France, England, Tibet, and several other even more exotic places over the years, and each of them had left its mark on her. Her worldliness made her choice of homes seem even odder, but she always explained it the same way – she did not choose the place, it chose her.

If the person questioning her had the proper background, she'd explain about the lines of power, and their convergence. She'd tell them how this was the single place in all the world she'd found completely in line with her energies. In this small cottage she could reach levels of concentration that were impossible anywhere else, and for her work, concentration was essential. That was another reason she chose solitude. There were so few who understood her life, and she grew tired of matchmaking friends and curious colleagues.

As the sun dropped toward the line of mountains to the west, she walked through the small home, tracing symbols of protection against the glass of each window, checking the wards at the doors, and setting things to rights. Her books were perfectly aligned. The small fountain in one corner of her den trickled with just the right amount of clear water. There were no stray papers on her desk, or pencils laying askew on the blotter. Among other interests, Feng Shui occupied her mind on a constant basis. She was keenly aware of any shift in energy, and quick to correct it. She abhorred imbalance.

Her bedroom was on the eastern side of the cottage where the morning sun could slide over the sill and invite her into each new day. The room would have looked strange to most, with the bed centered between walls hung with tapestries and lined with shelves. The floor was inlaid wooden tiles that formed concentric circles, each band of which contained a carefully placed ring of hand-painted esoteric characters and symbols. At the head of the bed, the foot, and to either side, centered between the widest of the circles about five feet from the frame, four wooden stands held cast-iron bowls for burning incense. Directly behind her pillow, a stouter stand held a large, ceramic bowl of white stone.

Rebecca walked slowly around the room, stopping momentarily at each of the stands in the circle. She sprinkled small handfuls of powder into the shallow burners and added in some leaves and twigs for kindling. Her incense was hand-made. Unlike joss sticks, or the tiny pyramids sold in occult shops and at flea markets, she had to get the flames started in the braziers to produce smoke. When they were filled to her satisfaction, she walked to the head of her bed and peered down into the ceramic bowl.

It was filled about halfway with clear water. The interior of the bowl was mirrored. It was a relic she'd brought back from a trip to Europe, and it was a very ancient piece. She'd followed a map so old it had threatened to crumble before she could photograph it through mountains and down musty, cob-webbed tunnels to retrieve it. When she'd finally located it, it had rested in a large pool of water that was clear, deep, and protected by water spirits. It had taken her nearly a week of careful preparation to communicate her need to the spirits, buy them off, and brave that pool, and all for this apparently unremarkable bowl.

As with Rebecca herself, appearances were absolutely deceiving. The bowl was – in every way – remarkable. Rebecca had done a lot of research on it before launching her search. It was said to have belonged to Morgana herself, though there was no provenance to validate such a claim. Rebecca knew what it was, and what it was used for, and that was what mattered.

The sun had completed its circuit of the sky and fallen behind the mountains. The shadows were deeper than they'd been even a few moments before when she entered the room, and she turned, just for a moment, to stare out her window at the fog-wreathed hills and the darkening sky beyond.

The mountains were a place of power, a place that had attracted creative spirits for centuries. They also attracted those with dangerous hungers. Rebecca felt the spirits in the hills, dark and light, and she blended with them. Secluded as she was, she was far from alone.

Before building her home, she'd spent weeks walking the forest paths. She'd slept in the mountains. She'd spoken to those whose families had lived there for centuries, learned their ways and studied their myths. She had found other powers in the hills. Some she'd contested, others were allies. All the while, she'd carved her place, carefully creating the proper boundaries, negotiating the wards and digging in roots. It was home now, more than the sand and rock of her homeland, or the high peaks of Tibet where she'd learned so much, or the deep glens and rolling hills of Europe. As much as possible, she had made herself a place of absolute tranquility and peace. The madness that was her life required it.

She also extracted a box of wooden matches. Working in a counterclockwise direction, she made a circuit of her bed. She lit the scented powders and leaves, blowing gently on each to fan the flames in each brazier. When all four smoldered, tendrils of smoke wafting in slow circles in her wake, she lit the joss stick and stood at the foot of her bed, facing North. She held the stick out in front of her, closed her eyes, and spoke softly, invoking the Archangel Michael. Next she moved to the West and called upon Gabriel, then Raphael and Uriel in turn.

Her circuit complete, she placed the still-burning incense stick in a holder beside the ceramic bowl, drew back the covers, and slid between the sheets. There was no light other than the faded orange of the dying sun, and the glowing tip of the joss stick, burned halfway down. She saw it in the periphery of her vision, smiled, and closed her eyes.

Very gently, the water in the bowl above her head rippled. The motion began in the center, rolling out in rings that matched those embedded in the wooden floor. When the ripple reached the edge of the bowl, it made a soft slapping sound, but Rebecca didn't hear it.