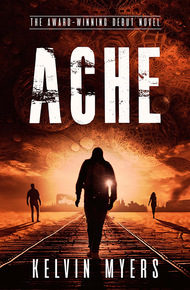 Levi Jacobs is the author of the Empire of Resonance epic fantasy series, as well as his ongoing Tidecaller Chronicles and Dragon Bard newsletter serial. He has received the Colorado Gold award in Speculative Fiction, taken first place in The Zebulon Fiction Contest for Science Fiction, and been a finalist in Mark Lawrence's SPFBO. Hailing from North Dakota, with much of his formative years spent in Japan and Uganda, Levi has an MA in Cultural Anthropology and sells fruit in the oil fields to make a living. Learn more at www.levijacobs.com.

Money won't make you happy. But can it design machines that will?

In the energy-scarce landscape of the former US, society has turned to mood-altering nanomachines to brighten its grim reality. Like many, Lance Mireles walks the line between use and abuse, all too aware of the hypocrisy that says the difference is who can afford their nanos. Falling on the wrong side of the line, but desperate to keep ties with his straight-edge younger brother Andro, he pushes his luck once too often, and ends up disowned from family and city-state, exiled to the political outlands.

Determined to make things right, but still struggling with his addiction, he stumbles on an isolated addict commune with a mysterious source of nanomachines. It looks like a second chance—but hypocrisy has found its way here too.

Meanwhile Mariela Amorgera realizes all is not well in the city: someone is manipulating the nanomachines' programming to influence behavior. Along with Andro and nano-designer Eli Chambles she mounts a desperate attempt to save her home and family from being enslaved to its own dependence. With the entire city hostage to their own minds and society falling apart, Lance must summon his outlaw community to save his family and home—if he can first save himself.

Huron was too crowded for a comedown. Lance wanted night time, empty streets, a little space to get used to the ache. Instead Dakota Avenue was jammed, electric scooters whining through the morning crush of business people cycling to work, the occasional car an island in a sea of suits and pedals. It was planting season, and the air shimmered with humidity, the exhaled vapors of a thousand rice paddies ringing Huron, mixing with the city smells of ozone and grease and second-hand air. 3Ds stretched into the crush from storefronts, lurid images of pressed shirts and dripping burgers and the latest Pacific Empire dramas, just transparent enough to meet city-state law.

Lance knew he was out of place: shabby coat, five-day stubble, dark circles under his eyes. He saw it in the sideways glances, the space left around him on the sidewalk. He was a burner, too weak to control his nanomachine use, addicted to overloading mood-mod nanites to get high. All he needed was a shave, a clean set of clothes, a night's sleep in a real bed, and he'd look like any of them. Had looked like any of them, a couple years ago.

That's what was hardest about being on the streets—the hypocrisy. They all used too. Every one of these commuters had bugs going, controlling their hunger, aiding their immune system, giving them little bumps of dopamine to help them smile at people they didn't like—no one went without nanos in Huron. Not in the home of Intralinq, one of the Federation's three biggest nanomachine manufacturers. Half the city-state worked there, most of the city was hooked on their mood-mods, and still people managed to glance sideways at him. They were all just as addicted—they just had the money to cover it up.

Lance used to work. He'd been a prize fighter, competing in matches across the Federation. But he'd made some bad choices, burned some bridges he should have saved. What he had now was need—and need meant doing things you weren't proud of.

Lance stepped through a holo of steaming rice into the alley running between a poutine shop and a business hotel. This time of year, no one could stand to keep their windows closed, and few could afford to run air-conditioning. As he'd expected, balcony windows and screen doors were open along the second floor, trying to draw in a breeze.

Or a burner. Lance leapt upward, catching his fingers on the bottom edge of a railing, and pulled himself up far enough to look. Door open, no one clearly visible, men's clothes on the floor. Good. He pulled himself all the way up, muscles still solid from years in construction, and swung a foot over the polyroz balcony.

"Hello?" he called, ready to drop back. "Anybody home?"

Lance opened the screened door and walked in, humid scent of fries and chili greeting him from an open box on the nightstand. The place was a mess, clothes and towels strewn across the floor, 3D newsreel still playing in the bathroom. Whoever it was had probably stepped downstairs for breakfast—he didn't have much time.

Lance made short work of the briefcase, the discarded pants, the bathroom bag. Nothing—no qumputers, no money, nothing worth selling. "Cautious man," Lance said, stripping off his stained clothes. "Good for you."

He pulled on a pair of black slacks and a polymaiz sport jacket, gleaming dully in the light from the window. Probably not worth much in resale, but necessary for what he was about to do. Lance ran a hand through his black hair and splashed water on his face, trying a grin in the mirror. Women had found him attractive, once—dark eyes, strong chin, wide chest. Today his stubble was a little beyond handsomely rugged, and he gave it a few painful swipes with a dry razor, knowing time was short. Get caught in the room and the game was up.

As a last measure he switched his public ID to a false one, Jeremy Moyers of neighboring Mitchell Principality. Implants were notoriously hard to hack, but the app controlling publically available personal information had been cracked six months ago, and Lance had bought two or three false identities to help with licks like this. He stepped from the hotel room, straightening his jacket.

The common area downstairs was crowded, merchants and businesspeople from neighboring city-states sipping chicory tea or rice porridge and scanning their 3Ds. Lance sat down at a bench near the door, pulled out a defunct qumputer cube and pretended to be fiddling with it. Qumputers—qubes—were delicate machines, packing so much hardware into such a small package; he had fumbled this one robbing the Quantessentials store down the block a few weeks ago. "Damn thing," he muttered as a man sat down next to him.

Qubes were also essential to regular life. Everyone had a neural implant, but beyond running nanomachines and sending simple messages, implants needed the processing power of qubes to be much use. Appearing online, streaming or recording 3D, money managing, visual overlays if you had retinadditions, they all needed qubes. The man didn't look over, so Lance grunted again. "What the hell?"

This time he caught the man's attention. "Something wrong?" His accent put him from somewhere east of here. Good.

Lance put on the same slight drawl. "Damn thing won't flash my wife. She gets uptight when I travel, you know."

"Use mine?" The man proferred his qube.

Excellent. "Well thank you, sir." Lance took the qube, glanced at the reception desk. "And, sorry about all this."

Lance was already up and running, stuffing the qube into his suit jacket. The key here would be to get out before the attendant could—

Security holos sprang to life in the air around him, swimming like a school of fish, meant to disorient. Shit. Lance put his head down and kept running, an alarm splitting the air.

The street was quieter, just Huron's normal morning crush, and Lance began shouldering his way through the crowd. He needed to get off the main streets, get out of chipscan range before the hard scan picked up his true ID. Down the block, all the holos blanked out, replaced in a moment with his last high school photo. "ATTENTION," a friendly female voice thundered. "THEFT IN PROGRESS ON DAKOTA AVENUE. PLEASE APPREHEND LANCE MIRELES. ATTENTION."

Red holo arrows found him a moment later, and as one the faces of Dakota Avenue turned to him, unfriendly. Shit fire. It was just a qube.

Hands began grabbing, men turning to try and hold him. This, at least, he was good at: Lance lowered his shoulder and charged, pushing and weaving and plowing when he had to, bound for the side street ahead. It took more than a few fumbling heroes to stop a militia-trainee-turned-street-tough.

His implant dinged. Message from Andro, the voice said. Shit. Andro. "Accept," he said aloud, ducking under a wild punch from a chubby man in a striped suit. When were they supposed to hang out?

You still coming r what? the implant read. Today. Fuck. "Tell him I'll be there soon," Lance worked out, shouldering through a final pair of half-scared factory workers and onto the side street.

Things were less crowded here, the holos thinner, and Lance pounded down the sidewalk, weaving through commuters, needing to escape the chipscans and the holos, before the MPs arrived. Shit. What if Andro had seen the warning holos? He racked his brain for where they were meeting—Burns Street Bistro, by the tracks. Right. They wouldn't have Dakota Ave warnings over there. Hopefully no linked chipscans either. He'd have to pawn the qube as soon as they were done, if he wanted any chance of selling the man's data along with the hardware.

The wail of an MP scooter came behind him, and Lance hooked into an alley, kicking loose crates across the ground. Get caught by the MPs and he was done—Lance already had multiple impending burglary charges. Out the other side, he ran for the residential streets, wails getting closer behind. Under Huron law, residential area chipscans were private and unlinked to the city-state network, so they wouldn't be able to find him here.

Lance found a thick clump of photosynth bushes on the first street and crouched behind them, panting, as the sirens drew nearer. Like, how soon? I got class. his implant read.

Goddammit. "Fifteen," he mouthed without speaking. "Give me fifteen little brother. Sorry."