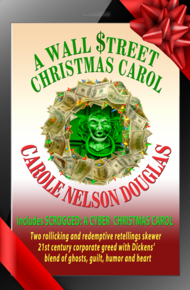 Together for the first time!

A Ghost Story of Christmas Past, Present and Yet to Be based on the 2001 Enron scandal

A Ghost Story of Christmas Past, Present and Yet to Be based on the 2008 Great Recession

With both modern retellings in one book, readers can compare a classic story reinvented from the same bones, twice, with lighter and darker depths of malfeasance.

When mystery superstar Anne Perry invited Carole into a story anthology called "Death by Dickens," Carole framed her murder mystery in a modern retelling of "A Christmas Carol."

I bump into Carole Nelson Douglas every year at DragonCon, and we have a lot to talk about since we're both writing in the mean streets of urban fantasy; Carole has her Delilah Street series, I have my Dan Shamble, Zombie PI series. Carole just did a great job with a book in our recent Urban Fantasy bundle, and when I mentioned I was trying to find titles for the Holiday Fantasy batch, she immediately jumped on board. – Kevin J. Anderson

"A Wall Street Christmas Carol" asks, and answers, the question: On Christmas Eve 2011, Caleb Gould is the most hateful and hated man in the world…can a modern billionaire match a nineteenth-century pinch-penny for ill will toward humanity and the capacity to change?

Gould must have failed to secure the French door to the penthouse rooftop, for it gave behind his back. A sweeping pull with his arms swung George Smith like a square dance partner into the cold, softly lit dark, the contested pistol still in their hands.

Smith's eyes widened as they glimpsed the crouching gargoyles.

Gould himself was surprised to detect a distant, deep thunder rumble like nothing he'd heard before in the city, sinister and indefinable, but not from above. He almost thought his garden gargoyles were growling, but the sound seemed to come from the bottom of Manhattan's glass and metal and stone canyons.

"They came!" Smith shouted, his voice almost lost in the shrill whistle of the wind.

Both men had ceased struggling, their hands welded to the gun that was rapidly becoming a knuckle-chilling fistful of pain cutting into their crushed fingers.

"Who came?" Gould demanded. "Another spirit?"

"It's a spirit, all right." Smith's bland hazel eyes blazed like the embers Gould had seen falling from his cigar to the street far below earlier that night. "The spirit of the people," Smith continued triumphantly. "So you hear them? Finally? They're real and they're here. They're the 'losers' your insanely selfish and risky business practices created, those you despise for not surviving the financial and emotional ruin you visited on them so you could live like a Roman emperor. But Rome fell, Gould, and so will you."

"What are you jabbering about?" Gould jerked hard and suddenly on the gun, feeling Smith's custody give for a breathtaking moment before it tightened again.

Smith was in full cry now. "Your judges, the people. I put up a website. I podcast and Tweeted. I told the world to come to this address tonight to witness Caleb Gould, the richest and most hated man in America and the world, show an astounding change of heart."

"There are always 'people down there,' Gould, but you wrote them off along with your huge tax deductions. Their suffering and anger were just so many headlines and online whinings to you."

The deep thunder in the canyon now sounded like pounding flood rapids surging in the street below. Gould let his hands slip off Smith's. The wimp wouldn't shoot him, in cold blood or hot.

He shuffled his frozen, wet, still-bare feet through two inches of snow to the stone balustrade. Leaning over, he saw all traffic had stopped at this very wee hour of the morning.

The dark streets were still dotted with pale fairy lights. People, their faces lifted up to his rooftop, called, shouted, chanted. His name. Caleb Gould. Over and over. The sound of his name on thousands of lips thrilled him. So Smith's "Roman emperor" would receive the tribute of the mob, after all. And he would accept it, by God.

Then he realized the winds up here had masked the true words.

Gould drew back, averting his face. The snow flurries seemed to shape themselves into the features of J. Jacob Marsh and the Spirits of Christmas Past and Present. Wasn't there a third spirit in that silly, sentimental story that his tormenters were replaying in his lofty penthouse this night?

When A Christmas Carol debuted in 1843 and cruel miser Ebenezer Scrooge underwent a dramatic change of heart, Charles Dickens immediately became "the man who invented Christmas." This thrilling ghost story combined sly humor with social ills and open-hearted humanity. Inspired, the readers of Dickens' day made Christmas into the spiritual and commercial holiday it is today.

"Scrogged: A Cyber Christmas Carol " is a modern retelling (with a Texas twang) set against the November 29, 2001, collapse of Houston corporate energy giant, Enron, where young corporate executives chortled in emails about extravagantly overcharging "the grannies in California" for their heating and cooling.

Why was it any surprise when all of Wall Street plunged off the deep end like Enron seven years later and harmed us all, not just grannies in California?

So I felt driven to create a darker version of my "Cyber Scrooge," who had been more alienated and insensitive than greedy, than the monster of power-grabbing selfishness in "A Wall Street Christmas Carol."