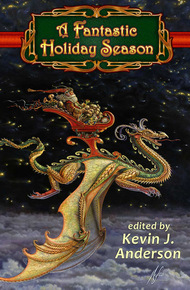 Grandma gives a sweater she knitted, Dad receives a necktie he doesn't really like, the kids get toys that make a variety of noises, most of them loud, all of them annoying.

What do writers give for the holiday season? They give the gift of stories that take the reader away to fantastical times or places, tales that can be blood-curdling or heartwarming, adventures that capture the heart of the season.

Early in my writing career, I would spend Christmas with a group of fellow aspiring writers, and each Christmas Eve we sat around the fireplace and read a new Christmas story we had each written for the occasion. For a special holiday project at WordFire Press, I contacted a lot of those authors and asked if I could reprint the best stories from those Christmas Eves. It turned out to be a spectacular book, winner of the silver medal for the Independent Publisher Book Awards.

So why not try to top it for the next year? In A Fantastic Holiday Season: The Gift of Stories, I worked with Keith Olexa to gather original stories by a bunch of my big-name writer friends—Heather Graham, Jonathan Maberry, Mercedes Lackey, Patricia Briggs, Mike Resnick, Kristine Kathryn Rusch, Nina Kiriki Hoffman, and I included a new Dan Shamble story. Are we crazy enough to do it three years in a row? We'll have to wait and see. – Kevin J. Anderson

Grandma gives a sweater she knitted, even though it doesn't fit all that well. Dad receives a necktie he doesn't really like. The kids get toys that make a variety of noises, most of them loud, all of them annoying.

What do authors give for the holiday season? Something that's more homemade and personal than any secret family Christmas cookie recipe or well-cherished fruitcake. They give the gift of stories: fiction that can take the reader away to fantastical times or places, tales that can be blood-curdling or heart-warming, adventures that capture the heart of the season.

Early in my career as a writer, my annual tradition was to spend the holidays with a group of writer friends, most of whom were clustered around Eugene, Oregon. I lived in the San Francisco Bay Area where I worked as a technical writer for a large research laboratory—in other words, I had a "real job"—but I very much wanted to be a full-time writer and worked at my stories and novels, gradually seeing some success.

Each year I would make the drive up Interstate 5 along the spine of California to Oregon, and in questionable mid-December weather, but I didn't want to miss my holiday gathering. One year I even took my fiancée Rebecca Moesta with me (and we just celebrated our 22nd wedding anniversary).

One of the Eugene locals would act as the host, and we'd get together the day before Christmas for conversation and cooking. Some people baked cookies or other desserts; I always made my famous lasagna, a masterpiece of a recipe that has been in my family for five generations. (Yes, turkey or ham might be more traditional, but we were a group who broke with traditions—we were writers, after all—and formed our own.)

After the late afternoon feast, we passed out gifts. In keeping with being starving writers, no gift could cost more than a dollar, which forced us to do some imaginative shopping.

After the gift giving, we sat around for the highlight of the evening—the real sharing of gifts among writers, usually by a fireplace, usually with mulled cider. We would take out printed manuscripts, stories that we each had written specially for the occasion, which had never been read before. We went around in a circle, reading aloud one story after another. Some were heartwarming, some were scary, some magical, some imaginative, some haunting. Each of us had our own particular spin on the holiday season.

We were all new writers, learning our craft and learning the business. We poured our hearts and our energies into these stories.

In the years since, members of our group have become international bestselling authors, New York Times bestselling authors, winners or nominees of almost every award in numerous genres, from the Writers of the Future Award, to the Hugo, Nebula, World Fantasy, Philip K. Dick, Bram Stoker, Shamus, Edgar, Pushcart, Endeavor, Sidewise, Scribe, Locus, Mythopoeic Society, Romantic Times Reviewers' Choice, and Theodore Sturgeon Awards (and probably many others). Some have become publishers themselves, or movie producers, record producers, game designers.

Maybe there was magic in those Christmas Eves after all.

This anthology collects our favorite tales from those holiday gatherings. Though you couldn't be with us sitting around the fire sipping mulled cider (and digesting my lasagna), we are happy to share this special holiday gift of stories with you.