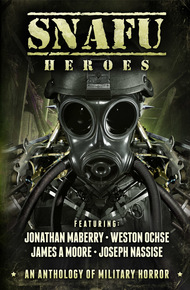 Geoff Brown is an Australian writer and Australian Shadows Award-shortlisted editor. He is the owner of Cohesion Press, and doesn't suffer fools gladly.

Amanda J Spedding is a trained editor and an award-winning Australian author. She owns Phoenix Editing, and tries hard not to Gibbs slap people.

A supplemental volume to the first SNAFU anthology, this book contains short stories and novellas from four of the best military horror writers in the field.

Rather than give you another novel to digest as part of this bundle, I wanted to offer something different and SNAFU: Heroes was the perfect solution. A collection of four military horror novellas featuring some of the best names in the thriller market, including Jonathan Maberry's Weston Ochse, James A. Moore, and some guy named Nassise. – Joseph Nassise

The body lay unmoving in the middle of the street, partially covered by the inch or so of snow that had been falling since the sun set half an hour before. The lights of the SUV made it easy to see that the body was that of an adult male in dark clothing. The shadows looming over it, however, never mind the snow, made it difficult to make out any further details.

Knight Commander Cade Williams, the man in charge of that evening's operation, slowly brought the vehicle to a halt a couple of car lengths away from the corpse. He stared through the windshield at the lightly falling snow on the body, then turned his attention to the two-storey buildings looming on either side of the street.

In the seat beside him, his executive officer, Master Sergeant Matthew Riley, was doing the same.

"What do you think?" Riley said, his usually deep and boisterous voice oddly hushed in the still confines of the car, almost as if he were afraid someone, or something, might overhear them.

Cade didn't blame him; he'd started getting the creeps the minute they'd driven into town.

"Can't just leave him there," he said, his attention still on the buildings around them, watching for movement or some other tell-tale sign that they were occupied. "He might not be dead, just injured." Besides, there isn't any room to drive around him, even if I wanted to.

The village streets were narrow enough as they were; never mind with a body in the middle of them. There was no way to get around the body unless they moved it.

Which might be just what those who put the body there are counting on.

"Look alive. We don't know what's out there waiting for us..." he said, as he opened the door and cautiously stepped out. The others followed suit.

All four were members of the Holy Order of the Poor Knights of Christ of the Temple of Solomon, also known as the Knights Templar. Contrary to popular belief, the Order had not been destroyed at the hands of the king of France when he'd burned Grand Master Jacques de Molay at the stake in 1314, but instead had gone underground, hidden away, its members biding their time and waiting for the right opportunity. Resurrected as a secret combat arm of the Vatican in the closing days of World War One, the Order's primary purpose was to protect mankind from supernatural threats and enemies. There were thousands of members worldwide, organized into local commanderies and led by a Preceptor that reported to the Seneschal at the Order's ancestral home in Rosslyn, Scotland. Despite its size, the Order operated in secret, preferring to carry out its mission from the shadows themselves; fighting the darkness with nothing more than their wits, their skill, and their faith to protect them.