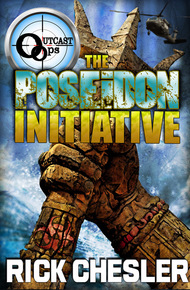 Rick Chesler holds a Bachelor of Science in marine biology and has had a life-long interest in the ocean and its mysteries. When not at work writing, he can be found scuba diving or traveling to research his next thriller idea. He currently lives in the Florida Keys with his family.

During a terrifying break-in at a marine laboratory, a European-North African terror group makes off with a large quantity of deadly nerve agent. Demands are made and large-scale attacks are launched in the United States from coast to coast.

Enter O.U.T.C.A.S.T. (Operational Undertaking To Counteract Active Stateside Threats)—six ex-operatives from six of America's most powerful organizations. Each has been unceremoniously released by their respective former employer for alleged misdoings that leave their pride wounded but their essential skill-sets untouched. After uniting over their shared bond of dismissal from the nation's most elite outfits, the disgruntled spooks can now work together like never before to take down threats to their beloved country, a country that branded them as outcasts but needs them now more than ever.

When the President of the United States becomes a target of the terror group while hosting a party on his yacht, OUTCAST is hell-bent on showing America that their way isn't the best way—it's the only way.

I've only known Rick Chesler for a couple of years, but in that time I've come to respect him as the kind of writer who can spin a powerful story of action and intrigue. When I was looking for writers that could deliver the right kind of special ops title, I knew I had to have one of Rick's O.U.T.C.A.S.T novels and the Poseidon Initiative is just what the doctor ordered. – Joseph Nassise

The surf was high that day, a day budding marine biologist Jasmijn Rotmensen would never forget. Breaking right on the sand, the waves exploded into a fine mist of sparkling water droplets that filled the air, delighting hundreds of beachgoers along the packed shoreline that hot Summer day as they ran and splashed and basked in the sun.

The twenty-year old stood on the edge of the sand, her backpack slung on one shoulder as she glanced at the pier to her right. She cursed the fact that she'd been up all night studying and slept in. Now she'd be lucky to find a patch of sand large enough to accommodate her towel, and it would be far back from the water's edge. Such is life, she thought, as she tip-toed across the scorching beach. All she wanted to do, anyway, was to read a few s from her biochemistry text and get outside for a little while. No big deal.

Threading her way between people's blankets and dodging tossed frisbees and balls, Jasmijn reached a relatively open spot of sand and stood there, gauging her chances of getting any closer to the water. It didn't look good. This will have to do if I want to get some reading done anytime soon. Shielding her eyes with a hand, she glanced longingly at the ocean directly in front of the beach, just beyond the breaking waves. A frown formed over her delicate features. She blew a wisp of her blonde hair away from her eye as she studied a discolored mass just beyond the waves.

A shapeless, reddish-brown patch lay in the water, stretching roughly parallel to the beach in both directions as far as her eyes could see. An onshore breeze cropped up, causing her to blow another strand of hair off her face, and also, she noted, to push the discolored mass of water toward the breaking surf where dozens of kids and a few adults frolicked. She thought back to one of her biology books, her quick mind associating the physical thing in front of her with a passage of text she'd read a year earlier.

She couldn't recall all of the details, but Jasmijn knew that a red tide was a massive bloom of algae—microscopic plants in the water—that could be dangerous to fish because they depleted the surrounding water of all oxygen. Neither plants nor animals, they belonged to a classification of living creatures known as Protists.

She was trying to remember more when she heard the first screams.

Others stood around her and Jasmijn had to crane her neck to look at the water's edge, where clusters of bathing-suit clad people knelt on the wet sand.

Up and down the beach the cries were repeated. A mass exodus of swimmers swarmed up the beach, trampling those who didn't bother to get up to see what the commotion was about.

Jasmijn squinted, looking past the throng of bodies now lying in the sand to the water beyond. The waves were red in color now, and when they crashed, a thick plume of red mist rose into the air where the onshore wind caught it and sprayed it over the beach crowd like a mister fan. Jasmijn stopped trying to make her way to the water as she dredged up a little more of what she knew about red tides from her memory banks.

Red tides are caused by dinoflagellates. They produce a powerful toxin that is accumulated by shellfish. People who eat shellfish that have been exposed to red tides sometimes contract Paralytic Shellfish Poisoning.

But that was through eating them. Even people who swam through a red tide weren't known to get sick from it. As far as she knew, it only happened from eating shellfish, which accumulated the red tide toxins in their flesh. When cooked, that toxin failed to break down. Could it be that these people were breathing the red tide organisms in through the wave plumes and concentrating the toxins in their bloodstream that way?

Jasmijn watched another wave smash on the sand, sending another plume to waft out over the crowd of people which had swelled with those arriving to help.

Within an hour, the death toll would rise to nearly three hundred people.