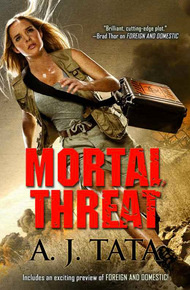 A.J. Tata is a career paratrooper and infantryman. Retiring as a Brigadier General, he commanded combat units in the 82nd and 101st Airborne Divisions and the 10th Mountain Division. A West Point graduate and Harvard University National Security Fellow, he is the award winning author of three critically acclaimed novels, Sudden Threat, Rogue Threat, and Hidden Threat. He was also a writer in Glenn Beck's New York Times Bestselling Miracles and Massacres. Tony has been a frequent foreign policy guest commentator on Fox News, CBS News, and The Daily Buzz. NBC's Today Show featured General Tata's career transition from the army to education leadership. He served as Chief Operations Officer for Washington, DC, Public Schools and then as the superintendent of Schools in Raleigh-Wake County, North Carolina, the sixteenth largest school district in the nation. An avid surfer, he is married to Jodi and has two children, Brooke and Zachary.

Medical school student Amanda Garrett and American doctors working secretly in Africa have found a cure for the Ebola and Human Immunodeficiency Viruses.

Leaders of the Islamic State want the cure so they can show the world Islam is a benevolent religion that all Africans should follow.

The President of the United States believes an alleged 30,000-year-old Sub-Saharan religious text called The Book of Catalyst identifies him as being of divine origin.

As Amanda operates her portion of the clandestine CIA Project Nightingale in a Tanzanian orphanage, she is attacked and chased by brutal killers called The Leopard and The Cheetah. Amanda has 48 hours to escape across the Serengeti Plain before the remaining vials of the cure expire.

The Islamic State escalates attacks across the Middle East using freshly converted fighters from Africa. The American President, however, chooses not to deploy sufficient troops to save U.S. Special Forces, including Amanda's husband, assisting in the air war against ISIS.

As Amanda attempts to save the rapidly decomposing formula for the Ebola and HIV cures, she finds herself at the center of a clash between warring media titans, Jonathan Beckwith and Zhor al Rhazziq, who are following her every step toward the Olduvai Gorge, which some scientists claim to be the origin of human life.

A special ops bundle just wouldn't be complete without the latest knock-down exciting thriller from retired Brigadier General A. J. Tata, which is why I'm so excited to be able to offer Mortal Threat as part of the bonus level for this bundle. Tony's books are absolutely riveting and this one moves along at a blistering pace and feels like it's ripped right from today's headlines. Don't miss it! – Joseph Nassise

Amanda Garrett used her heel to kick open the plywood emergency room door. Her two rubber-gloved hands were holding one end of a medical stretcher while her protégé, Kiram Omiga, held the other.

"She doesn't have much time," Amanda said. The small African girl on the litter was huddled in the fetal position, Ebola-infectious drool seeping from her mouth. The girl was wearing a pink T-shirt and green shorts. Amanda noticed the dilated pupils and white salt stains on her face from a sweat that had stopped hours ago.

"Age is eleven. Name is Likika," Kiram said in a calm voice. At nineteen years old, Kiram had grown up in the Mwanza orphanage. He had known Amanda since he was fourteen after her first summer volunteering to assist the war orphans like him.

She and Kiram lifted Likika onto a makeshift operating table. They were both wearing rubberized gloves, olive green U.S. Army chemical protective suits with charcoal liners and gas masks. Amanda's initial research had been on finding a cure for the Human Immunodeficiency Virus, which they believed they had done. They had accumulated over ninety positive-to-negative serconversions on orphans and truck drivers riddled with HIV. Those were substantial results for her clandestine CIA program called Project Nightingale. Because the two viruses shared a common multiplying protein mechanism known as TSG101, Amanda had experimented on one dying Ebola patient two months ago. He had lived. Soon, truck drivers began dropping off infected Ebola patients at the "miracle clinic," hoping Amanda could save them. By her count, they had saved nine Ebola victims. She was eager to alert the CIA that the mysterious formula was ready for mass-market production.

"Syringe," Amanda said, holding out her hand. Kiram moved to her left as she stared at Likika, whose eyes were open wide as if she were astonished. The gas mask eyelets blocked some of Amanda's peripheral vision, which caused her to grow impatient. "Talk to me, Kiram."

"Here, Miss Amanda," Kiram said. He reappeared holding a clear syringe and three-inch needle. The tube was filled with a substance the color and texture of tar. Through the gas masks, their voices contained a tinny, muffled quality.

"Need you to hold her, Kiram. If she's still with us, this is going to hurt like hell," Amanda said.

"I understand," Kiram said. He bent over Likika and gently held her by the shoulders while Amanda inserted the needle into her left shoulder, as if she were giving her a vaccination. Applying steady pressure to the plunger, she heard Kiram chant a native Swahili melody to Likika, who, as far as Amanda could tell, was unconscious and close to death.

Having transitioned from only performing HIV vaccinations and cures to also conducting Ebola testing, Amanda was painfully aware that her Spartan facilities were inadequate. But how could she deny the victims the potential of a cure or prevention of disease? She couldn't. While she was a Columbia University medical school student who'd spent the last five summer and winter breaks in Tanzania at this orphanage, she believed in the inverse of the Hippocratic oath. Instead of first, do no harm, Amanda's maxim was first, help who you can.

The needle puncturing Likika's arm created a trickle of blood, which cut a path through the salt stains onto the operating table. Amanda focused on the black serum she was injecting through the hypodermic needle into the young girl's system. As the plunger reached the bottom of the barrel, she was concerned that Likika hadn't responded at all. She retracted the needle and immediately dumped the entire syringe in a hazardous waste container to her right.

"Pulse?" she asked, looking back at Likika and placing an alcohol swab on the injection site. She carefully wiped at the blood.

Kiram looked at Amanda and removed his glove.

"Hook her up, Kiram. Don't do that," she implored.

"It's okay. I'm careful." Kiram gingerly grabbed Likika's wrist with his bare fingers and paused. Like HIV, Ebola could only be transmitted via contact with bodily fluids. But still, Amanda thought.

Amanda counted the seconds, holding the gauze on the puncture site. Once she hit sixty, she asked, "Anything?"

Kiram said nothing. His eyes were focused on the girl's blank face.

After another sixty seconds, Amanda took a deep breath, which was like breathing through a wet towel on a hot afternoon. "Come on, Likika. Work with us, honey," she whispered.

Likika jolted, as if prodded by a defibrillator. Her arm rose off the table, and then her body went still. Amanda's pressure on the needle mark slipped with Likika's sudden movement. A spray of blood shot out …