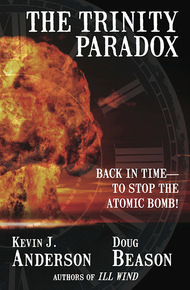 KEVIN J. ANDERSON has published 125 books, more than fifty of which have been national or international bestsellers. He has written numerous novels in the Star Wars, X-Files, and Dune universes, as well as a unique steampunk fantasy novel, Clockwork Angels, which is based on the new concept album by legendary rock group Rush. He has edited numerous anthologies, including the Blood Lite series, the Five by Five series, and A Fantastic Holiday Season. Anderson and his wife Rebecca Moesta are the publishers of WordFire Press.

Colonel Doug Beason, USAF (ret), is the author of 14 books, eight with collaborator Kevin J. Anderson, including Ignition (bought by Universal studios), Nebula nominee Assemblers of Infinity, and Ill Wind (optioned by Fox Studios). His solo novels are Return to Honor, Assault on Alpha Base, and Strike Eagle. His latest nonfiction book is The E-Bomb: How America’s New Directed Energy Weapons Will Change the Way Wars Will Be Fought.

The Trinity Paradox by Kevin J. Anderson and Doug Beason

Activist Elizabeth Devane wished for an end to nuclear weapons. Surely, she thought, if they'd known what they were unleashing, the scientists of the Manhattan Project would never have created such a terrible instrument of destruction. But during a protest action, the unthinkable happened: a flash of light, a silent confusion, and Elizabeth awakes to find herself alone in a desolate desert arroyo ... and almost fifty years in the past. June 1944. Los Alamos, New Mexico. While the Allies battle in the Pacific and begin the Normandy invasion in Europe, Nazi Germany deviates from the timeline Elizabeth knows and uses its newfound nuclear arsenal against America. Somehow, someway, Elizabeth has been given the chance to put the genie back in the bottle ... yet could she—should she—attempt the greatest sabotage in history?

I first met Doug Beason when he was a visiting Air Force scientist at the government research facility, the Lawrence Livermore National Laboratory, where I also worked as a technical writer. There, I had become fascinated with the history of the Manhattan Project, and Doug shared that interest. We had collaborated on short stories and a novel (LIFELINE). We toyed around with the idea of doing a time-travel novel set during the development of the first atomic bomb. At Livermore, we often saw protests against nuclear weapons, and Doug and I discussed how different the world was now compared with World War II, with Hitler racing to develop the first atomic bomb and the Japanese bombing Pearl Harbor. We wanted to write a great World War II thriller, but also to throw a determined anti-nuke protester into the middle of that reality and watch what happened. – Kevin J. Anderson

Reporter: [Tell us] what your thoughts are about the proposal of Senator Robert Kennedy that President Johnson initiate talks with a view to halt the spread of nuclear weapons.

J. Robert Oppenheimer: It is twenty years too late. It should have been done the day after Trinity.

World-shattering ideas were commonplace in the mountains of northern New Mexico.

Half a century before, at the start of World War II, the place had been rugged wilderness with only a few ranchers and hardy vacationers to disturb the peaceful emptiness. It had been the perfect place to establish a secret research laboratory to design the first atomic bomb.

Now, every time Dr. Graham Fox entered the complex, he stopped, thankful that he had participated in something so profound and extravagant so many years before. He still thought of Los Alamos as "the Project," though it had been five decades since the city had been founded, rising out of Quonset huts, temporary Army shelters, and mud streets. So much had changed since those early days.

Fox watched the activity around him in the laboratory bay. His laboratory, though the administration didn't let him do much anymore. His hands were too unsteady, his walk too slow. But just having one of the few surviving scientists from the Manhattan Project on staff gave any experiment prestige.

A technician wearing blue jeans and sandals bent over an array of high-energy capacitors. He tightened a bolt with a blue-painted wrench. Capacitor boxes filled the room, each one just under a cubic foot. Thick wires sprouted from their tops and covered the floor like spaghetti.

Fox observed the technicians scurrying around with self-imposed urgency. He could hear the clank of tools and the muffled conversation subdued by the sheer size of the laboratory bay. He could smell the oil on machined parts, various sealants, the cold cement floor. The air-conditioning gave the place a stale and clinical chill.

"Vanilla" nuclear weapons no longer dominated the thrust of Los Alamos research. Spending hundreds of millions of dollars to change the center-of-gravity of a device by a few centimeters just didn't make sense—nor did it get a sympathetic ear from Congress. Instead, sexy research proposals backed by dazzling slide shows pulled in the bucks: strategic defense, pulsed power, exotic weaponry. Fox doubted that anybody in Congress really understood the concepts; but then, congressional perception had always lagged far behind research needs. And these days, the scientists had no General Groves to bully ideas through bureaucratic roadblocks.

The electrical storage banks in Fox's lab held only fifty pounds equivalent of high explosives. Not much by the standard of a nuke, but when used to drive magnetized rings of xenon plasma in a compact toroid, the x-ray intensity could approach the damage potential of the old dirty fission weapons. The kind of weapon terrorists were likely to use, the kind Iraq, Libya, and North Korea were still scrambling to obtain.

Fox wiped his hands on his lab coat and sauntered over to check the wiring on one of the capacitor boxes. A bearded technician looked up as he approached. "Careful, Dr. Fox. The bank is going hot. We're getting ready for the smoke test."

"The smoke test, right-o!" Fox nodded. He still kept his British accent after all these years.

As a physicist, he cared little about the intricate electronic monitoring systems that the technicians loved. He preferred the old-fashioned "smoke test" to the fancy diagnostics to ensure that all connections were correct: flip the switch and see if it worked or if something started smoking.

Fox squinted at the array of wires, then jiggled one of them. He hated the dim lights in the lab. It seemed more difficult to see every day. "Can the rail-gap switches handle it?"

"They're good up to a couple of megavolts before they break down," the technician said.

"Good." Fox nodded to himself. Everything would already be hooked up properly, but he felt obligated to show his concern. It kept the techs on their toes, and they enjoyed it.

Back in 1943, when Oppenheimer had recruited scientists from all over the United States, the Project techs came mostly from the Army, with a few local Indians and helpers from the outlying towns added in. Everyone had pulled together, just as now.

Fox had been a young idealistic scientist then, uncertain about the moral implications of having a doomsday weapon. But though he hadn't shared the patriotic fervor, the frantic pace and enthusiasm had galvanized everyone. How else could they put up with the horrible conditions, the isolation in the mountains—where all mail had to be delivered to a Santa Fe post office box because Los Alamos itself did not exist on any map?

By contrast, he felt the enthusiasm of the nineties to be tainted. Instead of racing against the Nazis, the goal now was to be victorious over congressional staffers, trying to get off a successful test posthaste so that the funding would continue.

"Just turn it on. Shall we see if we're going to blow their socks off?"

"Powering up." The technician spoke into the intercom. "Clear the bay. Short test coming up on bank two. Clear the bay." He flicked a row of switches on the metal control rack near the wall. He kicked a long wire on the floor, knocking it out of the way. "Hey, Dr. Fox, get away from there. We've got a lot of juice flowing through—"

But Fox smelled smoke, the foul kind that signaled burning solder and electrical insulation. He lingered in the high-ceilinged bay that held the capacitor bank. He bent closer. He could feel the air humming around him, his white hair lifting from static electricity. Damn! One of the connections was loose, one that he had just fiddled with. Had he broken something? With all the power flowing through the capacitor bank, that would cause major damage pronto.

He tried to yell for the technician to shut everything down, but he couldn't remember the man's name. The fumes and the power in the air made him dizzy. His skin felt clammy.

"Clear the bay! The lines are still charged!" The technician raced down to Fox. "You all right, Dr. Fox?"

Shut the thing down, blast it! Fox thought, but he reached out a hand to steady himself. The tech's shoulder provided a stationary point. Smoke poured out of one of the capacitor units. It sizzled, then popped.

The two capacitors next to it followed suit. Thick black smoke curled from the bank. An instant later a siren wailed; amber lights flashed throughout the high bay area. A computer-generated voice rang over the intercom. "Emergency: Halon discharge. Fire in the complex. All personnel clear the area."

The discharge caught three other techs. The bearded man's face was wide-eyed, the words "Holy Mother!" frozen on his lips. Hissing gas flooded the bay and choked off the fire.

A white flash burned behind Fox's sight. It reminded him of the Trinity site, the first atomic test he had witnessed so many years before…