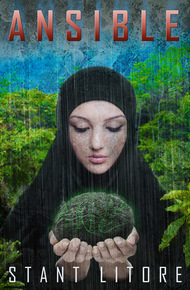 It is the twenty-fifth century. As in the early Middle Ages, the Islamic world is now the center for learning and scientific exploration. And the planet's most ambitious project is Starmind, a research institute that transfers the minds of volunteers, called Ansibles, across gulfs of space and time to make first contact with other sentient beings in the universe.

Sometimes, this does not go well.

Each of the Ansible Stories follows one team of brave minds across the void. These are their reports, their transcripts, the only accounts of what they have found.

You should read them.

After all, Starmind might need you, too, and isn't it time you finally found out what's out there?

ANSIBLE includes four of Stant Litore's Ansible Stories in one volume, including the never-before-published story "Ansible 2."

I've met Stant Litore at Denver-area conventions, and he has been watching my work as curator for storybundle. He approached me to ask if I'd consider something of his in an upcoming bundle. We discussed some of the upcoming subjects I had in mind, and he suggested collating a sequence of stories that had done rather well in his own indie published form. This is the first complete collection of ANSIBLE. – Kevin J. Anderson

Please hear me. We are all in danger, the most terrible danger; we are all going to die terrible deaths. If you can hear me, if anyone can hear me, remember these words. Please. Pass them on to your children, and to theirs. You are our one hope.

I am Ansible 15715, and I was born Malala Ali, named for a hero of my people, a woman who fought to save minds. I was born in the year 2419 by your calendar, and in the year 2444 I graduated with multiple degrees in linguistics and psionics from KAUST, a university that does not yet exist. I was so, so hopeful, so wild with joy when I was named for the Starmind project. Allah forgive me for what I have done.

There were four of us initially, but mine was the only mind to survive the transfer. That was the first terror; if only it had been the last! I opened my eyes on what I assumed was an alien world, saw no sky above me but a darkness of rock, and pale lights around me from bioluminescent, stationary creatures that grew on the walls of that cavern. I got up on one elbow as quickly as I could, and there were three others there with me. Two were dead. The third—her eyes were rolling and she was babbling monosyllables and drooling.

I remember my heart pounding. I remember leaping up, screaming, then screaming again because my voice was so deep and raw. The body I had transferred to was so different. Human, clearly, but different; I stumbled, not knowing at first how to keep balance. I was naked and this body was obviously male, and it had so little muscle. On earth I had trained until I could do a decathlon; it had been a source of pride for me in college. Starmind had reinforced this. "A sound mind in a sound body": that had been one of their mottoes, one that I agreed with, though I thought it a strange choice for Starmind, a slogan borrowed from another continent and another time.

Now I was here, in a body sluggish and barely responsive, in an anatomy and chemistry alien to me. I tried to breathe deeply and calmly, and walk through the steps I'd been trained for. I checked my fellow survivor's vitals and was dismayed to find her heartbeat was unsteady; even as my fingers measured her pulse, her lips stopped moving and her silence carried her into sleep or coma. Shaking, I shut my eyes and looked inside, into the dark. Calling out, again and again, in my mind.

I must have called fifty or sixty times, with intervals between for quiet, intense listening.

I opened my eyes, stared bleakly at the faces of my dead companions, faces I didn't know but which had, for the brief seconds of our arrival, concealed behind them the minds of men and women I had trained with, competed with, and loved. The woman's breast stopped moving as I watched; she died as silently as water dies in the desert. I closed her eyes with my fingers. My hands shook as I stood.

I gazed out at the rocky contours of this world, so many light years from home, a world without a sky. I called out once more inside myself and still was greeted with silence.

And then I knew.

The mind that had inhabited this atrophied, male body had not survived my transfer into it. I was alone.

Whoever this man had been, I had killed him.