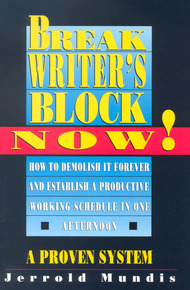 Jerrold Mundis is a novelist and nonfiction writer whose books have been selected by the Book-of-the-Month Club, Literary Guild, One Spirit Book Club and others, and widely translated. His short work has appeared in publications ranging from the New York Times Magazine to The Magazine of Fantasy & Science Fiction. He lives and writes in New York City.

Break writer's block immediately. Break it forever. In one afternoon.

This short, clear, direct book will do that for you.

Just as it's done for a great many writers already, from a Pulitzer Prize winner to a novelist with multiple books on The New York Times bestseller list. From hopeful beginners to fulltime professionals. From short-story writers, playwrights and screen-writers to biographers, journalists, and graduate students. From attorneys to architects, from corporate writers to medical doctors. In short, for people at every level of experience and ability and from nearly every walk of life.

This is the only system for breaking writer's block ever developed by a lifelong professional writer—and the only one ever proven and guaranteed to work. You need never fear or be afflicted by writer's block again. Truly.

Jerrold Mundis comes to this bundle courtesy of Mystery Grand Master Lawrence Block who, when he heard I was doing the bundle, asked me if I had contacted Jerry about his writer's block book. I confessed I hadn't heard of it, then hastily bought a copy and decided that we needed the book in the bundle. Jerry's the perfect guy to write it too. He counsels writers on breaking writers block, but more important, he writes a lot. Fiction, nonfiction, short stories, Jerry's done it all. If you're having trouble getting words on the page, then this book is for you. – Kristine Kathryn Rusch

Writer's block—whether it's over a novel, a dissertation, or a business report—is agony. And wanting to write but not knowing how to fit that desire into the demands of the rest of your life can be painful too. Both conditions are completely unnecessary.

This book will free you from writer's block immediately, and forever: You will never fear or be crippled by it again. Nor will you ever languish under an inability to find the time to write, no matter what your life is like. I know this unequivocally: I've been breaking block for myself for forty-five years now, as of 2011, and for others— while also creating for them a reliable and productive working schedule—for the past twenty-five years. And in that time I have written and published:

Seventeen novels, including Gerhardt's Children and The Dogs.

Thirteen books of nonfiction, including Prelude to Civil War and How to Get Out of Debt, Stay Out of Debt and Live Prosperously.

A number of ghostwritten novels and books of nonfiction for others.

My short work has appeared in such publications as the New York Times Magazine, American Heritage, Harper's Weekly, the Magazine of Fantasy & Science Fiction, Glamour, and New York magazine.

My books have been selections of: the Book-of-the-Month Club, Literary Guild, One Spirit Book Club, Doubleday Book Club, and Field & Stream Book Club.

My novels have been translated into more than a dozen foreign languages.

I have taught professional writing and been a consultant editor for The New York Times.

I am as vulnerable to writer's block as anyone else, yet the worst I've ever suffered from it has been an occasional afternoon in which I said to hell with it, it's too much of a struggle, and went for a walk with the dog. The reason for this—for not having stared at a blank page in torment or been unable to work for days, weeks, even months, or years—has been the system in this book. That is also the reason I have been able to write steadily through periods of my life in which there were many other demands and claims upon my time.

I developed these concepts and techniques in order to survive: Writing was my sole source of income; I had a wife and children; I couldn't afford to be blocked, or to go very long without writing for any other reason.

Early on I was only partly aware that I was formulating and practicing specific techniques. Later I became more conscious and deliberate. The point was, always, simply to be able to continue writing—no matter how I felt or what was happening in my life. And I was. Along the way I occasionally helped others who were blocked or who felt they couldn't begin or continue to write in the face of an increasingly full schedule. Usually that meant an evening going over with them the main points of what I eventually refined into this system.

As time passed, I began to receive requests for this help—sometimes from people I didn't even know, who had got to me through a chain of acquaintances. For a while I didn't mind. But eventually it became a burden, something that was at times even expected of me simply because I could do it. So I began saying no, and continued saying no for about five years, until the fall of 1985.

I was at a weekend transformational seminar in New York then, the only professional writer among roughly one hundred people. In all, seven individuals approached me to discuss their own writing: Three were blocked, one could find time to write only in fits and starts; of the others, one asked "how" to write, another was seeking an agent, and one wanted me to critique a novel. In as friendly a manner as I could, I told them each that there wasn't much I could do and referred them to a couple of books and a magazine for writers.

One of these people, a woman named Elaine, was a charming, Mississippi-born professor of English at a college in the city. Two years earlier she had been cured of a serious disease through a nontraditional method of healing. She had written about half of a projected three-hundred-page book on the experience, but had now been blocked for more than a year. Politely she asked why I wouldn't help, and was so disarming that I explained.

A month later I taught Elaine how to finish her book—in one three-hour session, for which she paid me. Because of Elaine, I have been breaking block and establishing reliable and productive working schedules for professional and nonprofessional writers for the past twenty-five years.

Among the professionals I have helped are a staff writer for the New Yorker, a contributor to Esquire, Rolling Stone and other magazines, a playwright and screenwriter, a widely published poet, an award-winning novelist, another who has had several books on The New York Times bestseller list, and a nonfiction writer who had been unable to work on a nearly finished novel for eight years. Among the nonprofessionals are graduate and undergraduate students, a psychotherapist, a real-estate salesman, a housewife, an actress, a singer, and a grandmother who wanted to write her memoirs for her family.

It has been fun, and satisfying. But I was astonished in the first few years to learn just how many people there are who suffer from block or believe their lives are too busy to allow them to write. Several hundred thousand graduate students alone are unable, year after year, to write their theses or dissertations. As many as one in every three Americans will attempt to write something for publication at some point—and most will either suffer block or give up because of other demands on their time. Many of my early clients urged me to put this service into book form, for people with whom I couldn't work personally. Finally that seemed to me a good idea: I got to write, I got paid, and I got to help—all of which I enjoy.

If you are agonized over block or over not having the time to write, then this book is for you. If you spend about an afternoon with me here, you will never fear or be crippled by writer's block again.