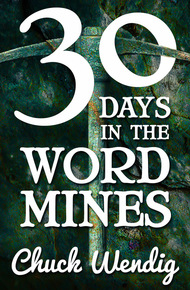 He, along with writing partner Lance Weiler, is an alum of the Sundance Film Festival Screenwriter's Lab (2010). Their short film, Pandemic, showed at the Sundance Film Festival 2011, and their feature filmHiMis in development with producers Ted Hope and Anne Carey. Together they co-wrote the digital transmedia dramaCollapsus, which was nominated for an International Digital Emmy and a Games 4 Change award.

Chuck has contributed over two million words to the game industry, and was the developer of the popularHunter: The Vigilgame line (White Wolf Game Studios / CCP). He was a frequent contributor toThe Escapist, writing about games and pop culture.

He currently lives in the forests of Pennsyltucky with wife, two dogs, and tiny human.

30 Days in the Word Mines by Chuck Wendig

30 Days In The Word Mines takes you on a month-long journey of writing, offering pages filled with practical writing tips, motivational throat-punches, and ruminations on the craft of writing and art of storytelling. Whether you're running with National Novel Writing Month or just want to hunker down and write to see just how far you can get, this book will help you every step of the way with a new tip, trick or thought every day of the month-long journey. From the mad mind behind terribleminds comes an original companion book to help you navigate the maze of writing every day. Good luck, and art harder.

The opinionated Chuck Wendig is one of those rare writers who can write about anything and make it interesting. When he writes about writing, the opinions combine with great advice. I've been reading Chuck's blog for years so that I can steal nuggets of truth from him. He's put those nuggets into this wonderful book, which will help you all become better writers (and more opinionated people). – Kristine Kathryn Rusch

I want you to write every day for thirty days.

Maybe this coincides with National Novel Writing Month (NaNoWriMo, which I pronounce ree-mo not wry-mo, because I'm a rebel, Dottie).

Maybe this is just you seeing if this novel-writing thing is for you.

Maybe you're trying out my 350-words a day plan (see appendix).

Maybe this will help.

Maybe only one day's worth of discussion will help.

This contains rumination on writing, practical advice on getting shit done, and little story seeds planted throughout.