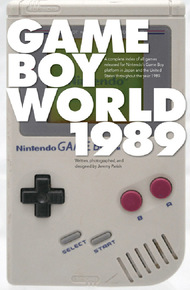 While Nintendo's Game Boy outsold every other game system of the 20th century, historians rarely discuss the system in depth. Game Boy World represents an attempt to archive and analyze the system and its library in depth.

This first volume explores the system, its creators, and every game released for Game Boy in all regions during 1989, the year it debuted. Features in-depth retrospectives for all games, including explorations of the companies and people behind the software, as well as all-new photography of every game's packaging and Super Game Boy color-enhanced screen shots.

A companion piece to the Game Boy World website (www.gameboyworld.com).

"For all its ubiquity, the Game Boy has actually been relatively ignored when it comes to history and design analysis. Luckily, retro game writing all-star Jeremy Parish has created this ode to the Game Boy's first year, specifically converted to Kindle format for this bundle, and it's chock full of exclusive pictures, insights, and details on the genesis of the first breakout handheld game console." – Simon Carless

Nintendo has been a major force in the video games industry almost since the beginning, but by and large it hasn't really competed on the same terms as other game makers. The company's history as a toy and gadget maker continues to shape its approach to hardware design, sometimes for better, sometimes for worse. In the case of Game Boy, this mindset definitely worked for the best.

If you look at Game Boy as a game system, its modest power and inferior LCD seem like sheer folly. Taken as a successor to Nintendo's long line of kid-sized gizmos and amusements, though, it makes perfect sense.

And, of course, the man responsible for Game Boy's hardware design,Gunpei Yokoi, had been the mastermind of countless Nintendo doodads and watchamacallits dating back to the 1960s. Former NCL president Hiroshi Yamauchi had catapultedYokoi to prominence when he saw the man messing around with a toy-like device of his own design to kill down time while working on Nintendo's assembly line. Yamauchi promptly commissioned Yokoi to turn the toy into an actual product. He did, and it become one of Nintendo's first commercial hits:The Ultra Hand.

In the years that followed, Yokoi spearheaded the design of dozens of toys, many of which worked as compact electromechanical renditions of arcade amusements. Another major hit for Yokoi came in the form of the Love Tester, a simple toy that measured the electrochemical voltage of two people to "predict" their romantic compatibility. Over time, Nintendo's toy line incorporated more and more electronic elements, which made their mid-'70s entrée into dedicated, single-title game consoles a natural one.

And with their flag planted in the soil of the embryonic games industry, Nintendo's Game & Watch seemed a similarly natural progression: Tiny portable gadgets that repurposed adult-oriented technology (in this case, LCD wristwatches) for kids. And adults, too, but mostly kids.

It's this history that created the primal stew that gave rise to Game Boy. But life didn't come into being until it was jolted by the bolt of lightning that was Sony's Walkman. One of the most revolutionary electronic devices ever made, the Walkman made hi-fi audio portable, packing the ability to play radio and cassette tapes into a compact, battery-powered device that output music through a pair of headphones.

That was the Walkman's fundamental revolution: It exploded the concept of personal electronics into the mainstream. Sony created a self-contained gadget designed for a single person, compromising top-of-the-line sound for the sake of convenience and portability, and this philosophy influenced hardware design for decades to come.

Nintendo wasn't even shy about borrowing Sony's incredible idea — "Game Boy" reads as an obvious riff on "Walkman," adopting the English-language construction of the cassette player's name while also speaking to its purpose (playing video games) and target audience (boys). Plus, Game Boy made it clear that the handheld was meant as the junior counterpart to the NES — the serious game experience was still to be found on the console, while the handheld offered a less completely formed take.

Game Boy turned NES-era game design into a solitary pursuit… but of course, Nintendo's love of play and socialization still found a place in the system despite its being designed for a single player to hold and play at intimate range. While Game Boy excelled at reproducing NES-like single-player experiences (the first year alone would bring players Super Mario, Castlevania, and Final Fantasy spin-offs), the system could also connect to other Game Boys through its Link Cable feature.

The Link Cable allowed as many as 16players to daisy-chain together… well, at least in theory. In practice, all but a handful of multiplayer games limited themselves to two-person experiences. By no means was this solely a Nintendo innovation, either. Atari's Lynx included a similar feature, the ComLynx, which enabled similar head-to-head play options.

But Link Cable's presence demonstrated Nintendo's priorities — after all, Lynx was meant to be the Cadillac of portable game systems, a massive luxury device with all the bells and whistles. Game Boy was a K Car, compact and inexpensive, its feature set stripped to the bare minimum. Nintendo cut every corner they could, but the ability to socialize made the final cut.