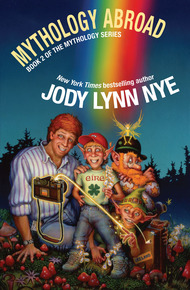 Keith Doyle and Holl, one of the Little Folk, set off on an educational tour to find their roots. Keith knows his family comes from the south of Ireland, but Holl's people lost contact with their relatives long ago. On a tour of archaeological digs, Keith recklessly falls prey not only to local smugglers, but magical beings who are far less friendly than the ones back home. Holl, who needs to secure a rare flower to permit him to marry his beloved, Maura, has no choice but to summon the Master, head of his village, and Diane, Keith's girlfriend. Together, they must rescue Keith from his own folly and solve the mystery of the disappearance of the Little Folk….

Everything you wanted to know about mythology but were afraid to ask… in case you’d wind up getting turned into a newt for asking a stupid question. – Steven Savile

"Now, now, my wee darlings, get along. This isn't for you, as well you know." Mrs. Mackenzie gently shooed her yowling cats out of her path as she pushed open the kitchen door. Sniffing the sweet, heady scent of milk in the bowl she held, the four Siamese cats followed her out into the garden, their erect tails hopeful.

"Enough of your din. You'll have your tea in a moment, my lovelies," Mrs. Mackenzie chided them, laughing. "This is for those who haven't got a mum to give them meals and treats." With her free arm, she held back a low branch of a stunted apple tree and scooted by between the tree and the garden wall. The blossoms had just begun withering away, and tiny green knobs swelled behind them. Mrs. Mackenzie started to count them, and smiled. Even in the wild Atlantic winds that crossed over and over the Isle of Lewis, her garden prospered well enough, as did their small hayfield, fenced in to guard it from the sheep. For this she gave thanks in her church on Sundays, but since she had lived here all her life, she knew better than to ignore the other powers of the land, and offered them thanks as well.

At the end of the garden path sat a square stone with a bowl-like depression in the top. The stone had sat there for heaven knew how many centuries and generations. Its rough, yellowed sides were covered with moss, and its corners had been shaved round by the wind. It was thought to be cut from the same stone which formed the forest of man-made monoliths on the hilltop above their farm, but was probably far older. She stopped in front of it and waited until the liquid in her bowl had stilled. The cats rubbed against her ankles and set up a fresh wail. Paying them no attention, Mrs. Mackenzie poured the bowl of milk into the hollow. "There. The first milk of the first milking from our Flora."

The moment she touched the stone, the cats lost all interest in her or the milk, and wandered back up the path. The chief cat and only female started a game of Tag with the youngest male, and the other two joined in, racing up and down between the plantings of young carrots and strawberries. Mrs. Mackenzie followed them toward the house, calling at them impatiently to go inside for their tea.

"Do you want to sit by the window or on the aisle?" Keith Doyle asked Holl as they struggled toward their row on the 747 aircraft. The flight attendants smiled at the thin, red-headed youth and the blond, apple-cheeked child in the baseball cap who followed him, and directed them across the body of the big jet and down another aisle. Keith ducked around a well-dressed man who was removing his coat in the Business section. "At least they said the flight isn't too full. We should get the middle seat of our row, too. Then we can stretch out. Can you believe how small these things are? How do tall people sit in them?" Another smiling attendant bowed them past her into the Economy section and pointed further down the body of the plane.

A wide-eyed Holl stared distrustfully at the paneled plastic walls as he trod, zombie-like, behind Keith. All around him, Big Folk, strangers, stowed their possessions in high-set boxes and sat down with expressions of expectation in endless rows of identically colored chairs with metal armrests. The chairs creaked as the big people sat in them. Holl shuddered. Though the other passengers ignored him now, eight hours of boredom might draw their attention to the sole representative of the Little Folk on the plane, and he'd be trapped. Keith called his people elves, which just went to prove how little even the Big Ones who understood them best knew them. He felt immediately claustrophobic. Statistics he had researched over the last few weeks on accidents involving commercial jet aircraft flashed alarming red numbers inside his head. The two hours they had had in the terminal before the flight's scheduled departure was too much time for him to sit and consider the dangers of the trip. Perhaps sometimes it was not a good idea to have been raised in a library. He had access to too many alarming facts. "Keith Doyle, I no longer think this is a good idea. Can I go back?"

Keith looked back at the mob of passengers following them along the narrow passage from the jetway, and sighed. "I think it's too late. We've gone through passport control and x-ray. You'll just have to hang on the best you can, and keep your mind occupied. Try and sleep, or something."

"This feeble little box will carry us safely four thousand miles?" Under the brim of the Cubs cap he wore to disguise his tall, pointed ears, the young elf's eyes were big and round with fear.

"The aisle," Keith decided firmly. "Wait for me to get in. Here we are." Their row number appeared on an overhead bin to Keith's left, and he shot his suitcase into the compartment. He took Holl's small bag and tossed it up next to his, then squeezed into the window seat. "Hey, we're not over the wing. Great! We'll be able to see everything!"

"Don't ask me to look," Holl said, settling down into the aisle seat. It squeaked alarmingly, and the smooth armrests were cold. "Sticks and stones, these chairs are uncomfortable!"

"There are pillows up there," Keith offered, then he caught Holl's outraged expression. He measured the distance with his eye, and pulled himself to a standing position. "Never mind. I'll get them."