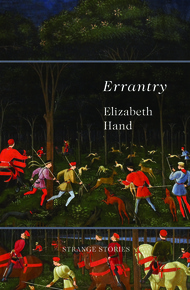 Ten stories, including the award-winning novellas "Near Zennor" and "The Maiden Flight of McCauley's Bellerophon."

Liz's lush descriptions of remote, wild places, both natural and supernatural, combine with vivid depictions of her characters and their trenchant emotions, their life journeys. These are people on the waning side of life, worldly wise, world-weary, often damaged by personal loss, and always culturally savvy. In these atmospheric, enigmatic stories, they—and the reader—will encounter terrors in the dark. Read Errantry in The Story Collection StoryBundle—but you may want to keep the lights on. – Lisa Mason

I WAS HANGING OUT IN Angus's apartment above the print shop, scoring some of his ADHD medication, when Tommy Devaraux ran upstairs to tell us he'd just seen the Folding Man over at the Old Court Grill. This was some years after the new century had cracked open and left me and my friends scrambled, even more feckless than we'd been thirty years earlier when we met as teenagers in Kamensic Village. The three of us had been romantically involved off and on during high school and for a few years afterward, held together by the wobbly gravitational pull exerted by adolescence and the strange, malign beauty of Kamensic, a once-rural town that had since been ravaged by gentrification and whose name had recently been trademarked by a domestic housewares tycoon.

Angus had never left Kamensic; he'd spent the last three decades nurturing a musical career that never quite took off, despite a minor 1977 hit that continued to generate residuals and a ringtone that now echoed eerily across the floor of the New York Stock Exchange. His most recent job had been with a brokerage firm absorbed by MortNet. The three kids from his first marriage were grown, but the younger ones, twins, had just started school, and child support and legal bills from the second divorce had stripped him of almost everything.

His ex-wife Sheila and the twins remained in the MacMansion out by Kamensic Meadows, but Angus lived in a third-floor flat he rented from another old friend who owned the struggling printing company below. The entire rickety wood-frame building smelled of dust and ink, the faintly resinous odor of paper mingled with acrid chemical pigments and the reek of melted plastic. In bed at night in Angus's room, with the old presses rumbling on the floor below, it felt as though we were on board a train. Walls and floors vibrated around us and a sallow streetlamp coated the window with a syrupy greenish light. A few yards away, real trains racketed between the city and the outer exurbs.

I lived sixty miles north of Kamensic, in the next county, but spent more time in my old stomping grounds than reason or propriety allowed. Angus was my half-brother, the result of what Shakespearean scholars term a bed-trick. We didn't know of our complicated parentage when we first slept together, but once we learned about it we figured it was too late and what the hell. Few people besides us ever knew, and most of them are now dead. My own career, as assistant professor of Arthurian studies at a small college upstate, had flamed out due to accusations of sexual harassment (dropped when a student recanted his story) and drug and alcohol abuse (upheld). Despite my dismissal, I found work as a private tutor, coaching rich kids on their college admissions essays.

I brushed my cheek against Tommy's as he swept inside and crossed to where Angus sat hunched over his computer. Tommy peered at the monitor and frowned. "Where's Estelle?"

Tommy had a little obsessive thing that dovetailed neatly with Angus's frenetic energy, as in their latest collaboration, a thirty-seven-song cycle Angus was writing about Estelle, an imaginary woman based on a real woman, a stockbroker Tommy had dated once. He became obsessed with her, and she eventually hit him with a restraining order and moved to Vermont.

"Well, sacrifice that Voidwalker and log off," said Tommy. "I just saw the Folding Man."