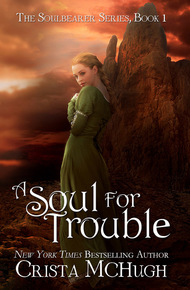 Crista McHugh is a NEW YORK TIMES and USA TODAY BESTSELLING author of fantasy and romance with heroines who are smart, sexy, and anything but ordinary. She also writes fantasy with a little less kissing and bit more action (outside the bedroom) as C. A. McHugh.

She currently lives in the Tesla-filled suburbs of Seattle with her husband and two children, maintaining her alter ego of mild-mannered physician by day while she continues to write on nights and weekends.

A Soul for Trouble by Crista McHugh

When you're a witch named Trouble, chaos follows.

Arden Lesstymine (known to everyone as Trouble) likes attention as much as the next girl, but this is getting ridiculous. When an insane stranger is murdered at the inn where she works, Trouble becomes the next Soulbearer for the disembodied god of chaos, Loku. Yes, it comes with the ability to channel the god's limitless power, but at the cost of her sanity — literally. Now she has a sexy but cynical knight claiming to be her protector, a prince trying to seduce her to his cause (and his bed), and a snarky chaos god who offers a play-by-play commentary on it all, whether she wants to hear it or not. To make matters worse, a necromancer wants to capture the soul of Loku for his own dark purposes, and the only way he can get it is by killing her first.

Devarius Tel'brien caught the barmaid before she hit the ground, cursing under his breath. No wonder the owner called her Trouble.

She seized in his arms, her eyes rolling back until only the whites showed. His gut clenched. Loku had chosen her instead of him. Once again, he'd failed to protect the Soulbearer. There was nothing else left for him to do but guide her through the transition and take her to Gravaria for more formal training.

His gaze swept over the statue that remained of Robb's body. The poor human was never meant to bear the weight of Loku, and neither was the naïve girl he held.

Cinder growled next to him. Dark figures with glowing red eyes poured into the main room of the inn. Undead. "Great, this night just keeps getting better."

The hiss of an arrow sang in the air, and he ducked under the nearest table. He'd gone from tracking down an escaped Soulbearer to hiding from assassins and zombies. Who had Robb pissed off? He reached for the vials on his belt and launched three of them at the shadows. Grunts filled the air when they exploded. He charged, using the confusion to his advantage. A flash of golden light erupted from his palm, and the walls of the inn rattled from the impact of the undead bodies slamming against them.

The wolf's growls grew louder, flames dancing off his fur. He leapt toward the nearest enemy with a snarl.

Dev picked up his sword and swung at the neck of another undead. Up close, the face appeared grey and waxy. Fresh undead. Lucky for him, that usually meant untrained and stupid, even if they were stronger than seasoned soldiers. His blade sliced through the neck of his attacker. The head rolled across the floor, and the body collapsed.

The room brightened as Cinder's flames engulfed another undead, and Dev scanned the room for the necromancer controlling the animated corpses. No sign of him. Just more undead pouring through the front door, surrounding them.

The wolf retreated behind him and flanked the other side of Trouble.

The undead slowed their steps and formed a semi-circle around them. He counted at least a dozen in the main room of the inn. Who knew how many waited for him outside? Their emotionless faces revealed nothing of their intentions, but the glow of their red eyes intensified.

There were only three ways to kill undead: burn them, behead them, or kill the necromancer responsible for them. Words formed on his lips, and the magic within him hummed to life. It flowed from his center and down his arm like a tidal wave. As the last syllable of the spell hung in the air, a stream of fire rushed forward from his hand, igniting his attackers. They flailed backwards with a high-pitched wail. The flames from their limbs licked the curtains and wooden furniture of the room, and smoke choked the air.

Trouble's body stopped jerking. He flung her over his shoulder and ran for the kitchen. Relief washed over him when he saw the gaping back door. Lady Luck hadn't totally screwed him over tonight.

The blazing inn captured the attention of most of the bystanders on the one dirt road that ran through this town, but Dev stuck to the shadows. No need to entice them to form a lynch mob. Based on the warm reception he'd experienced earlier this evening, a foreigner like him wouldn't have a chance at justice if these simple folk got a hold of him, especially once they realized he wasn't human. He lost count how many times he'd cursed Robb for coming to this backward kingdom.

"My inn!" the burly human who tried to threaten him earlier shouted, his face red. "That witch set it on fire to spite me."

Dev turned his head to the rump that lay beside his cheek. "A witch, eh? When this is all said and done, you're going to have some explaining to do, Loku."

Cinder crept ahead, peaking around corners before he ventured forward. Dev followed him with silent footsteps. The sharp points of the girl's hips dug into his collarbone, but at least she was light enough not to hinder his movements. He slipped through an alley at the edge of the town and found the grove of trees where he had tethered his horse. Once again, Lady Luck smiled on him. The horse was still there.

He tossed Trouble over the saddle and mounted the horse behind her. For a moment, he closed his eyes and tried to sense the presence of dark magic. Years of his knightly training didn't fade when he was sentenced to become the Soulbearer's guardian. Part of him wanted to hunt down the necromancer responsible for tonight's attack. Creators of such atrocities didn't deserve to live.

Cinder's whimper interrupted his concentration. When he opened his eyes, the wolf licked the girl's dangling arm.

"All right, I'll take care of her first." He'd pledged centuries ago to protect the Soulbearer, and Trouble needed all the help she could get.