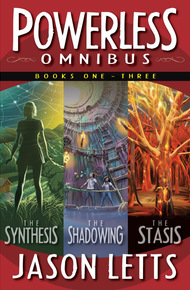 Aside from battling it out on the keyboard, Jason Letts is an endurance athlete and World's Toughest Mudder competitor, and he has the scars to prove it. He enjoys running forest trails, cycling winding back-country roads, and exploring rivers and lakes in a kayak. He reads mostly fantasy and has all his life, not because it's trendy or violent, but because good fantasy always speaks to something essential about the human condition.

The first three books of the five book Powerless series are now available in this special omnibus edition!

In a world where everyone has a unique, magical power, the only girl without one must find a way to bring her family together. Mira Ipswich couldn't have ever known the startling difference that separates her from the rest of humanity. But when she discovers a strange anomaly in the midst of her seclusion, her parents are forced to reveal she exists in a world where everyone is imbued with a wondrous natural gift. Everyone except herself that is. As this naïve, headstrong girl attempts to understand her inconceivable condition and fit in with peers, she becomes embroiled with the dangerous forces that threaten her homeland.

The first three books in this tale of discovery and excitement are available now. In The Synthesis, Mira struggles over how to achieve her ambitious goals while being hopelessly different. In The Shadowing, she and her friends take on mentors who offer them disturbing truths about the world they live in. And in the third book, The Stasis, this small group of teens must set off for the warfront and the confrontation that has awaited them their entire lives. The danger and intensity grow exponentially, and only the strength of their friendships will determine if they persevere.

Mr. Fortst took a moment to wistfully admire the students who stood before him and mumbled something about the importance of this occasion in their lives. How precious is youth, he said, and he inquired about what the day’s results would set in motion.

"Ok, last year’s rank will work as a seeding system. Vern, you’re up first and your opponent is Mira, since she doesn’t have a rank. Take your places and let’s get started!"

The students scattered, taking up spots in the nooks and branches of the trees. Fortst found a good vantage point along the sideline. As they walked to their starting points, Vern and Mira glanced at each other.

"No place to hide now. I hope you’ve got something good to show us," Vern said.

Mira’s heart raced in her chest. She couldn’t have said anything if she wanted to. Placing her front foot just behind the line, she looked up to see the gangly boy across the field and the white ball sitting on the grass between them. She focused on her game plan and looked over for the signal to start. Vern too adopted a ready position.

All of the students looked on as Fortst raised one arm high into the air. Letting it fall while whistling, the match began. Both competitors immediately sprinted toward the center. A few steps in, Mira let out a shrill and harrowing scream, causing Vern to look about in a frantic manner. After a moment when nothing happened, he raised his hand and a strange sensation came over Mira.

Pushing her legs as hard as she could, Mira suddenly felt like the Earth no longer pulled her down. Instead, her body began to fall forward and for a second she floated above the ground. Once her body had been completely swept into horizontal motion, Vern lowered his hand and let Mira’s body drop to the ground. She fell flat on her face.

She looked up just in time to see Vern scoop up the ball and jog it back to his goal. The reality of what happened made her wince. In vain, Mira closed her eyes to block it out, but the sound of the cheering and hollering students snuck into her head. She grabbed at the grass and tore it out. She wanted to scream into the dirt...