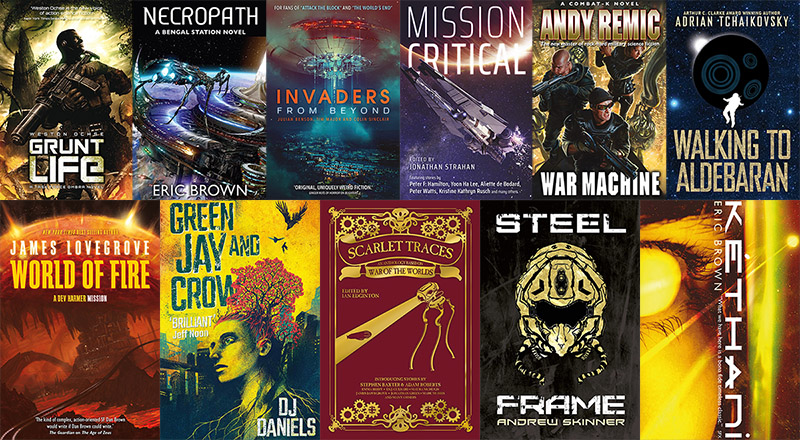 When someone says "Alien", we tend to have a very green mental image. But "alien" doesn't have to mean the little bug-eyed men in flying saucers; it isn't always the enemy in a monster suit, trying to destroy the White House. Sometimes it's an incomprehensible viewpoint, or trying to survive in a radically different place. Sometimes it's simply trying to find a single point of contact between civilisations that are, quite literally, worlds apart. And sometimes it's realising the humanity in others – and ourselves.

Of course, sometimes it is that the slime things from Planet Zorg have attacked again and the world needs to be saved, again. Whoops, there goes New York!

And that's the fun of it.

In this bundle, we wanted to explore the breadth of alien contact – from the dangerous enemies in Wes Ochse's Grunt Life and Andy Remic's War Machine to the puzzling, confusing beings of Green Jay & Crow and Kethani. It's not all kicking green butt, either: Adrian Tchaikovsky presents a wonderful, funny alien horror in Walking to Aldebaran, and Jonathan Strahan collects some of the best writers around in Mission Critical, looking at what could happen to anyone out there in the deep cold of space – human and alien alike. Andrew Skinner's Steel Frame gives us an enemy that is as incomprehensible as it is deadly; and Scarlet Traces lands us back on Earth alongside the Martians of HG Wells

Alien Action – in all of its varied, strange ways. Now: go save that world. – Rebellion Publishing

If you pay at least the bonus price of just $15, you get all four of the regular books, plus SEVEN more books, for a total of eleven!